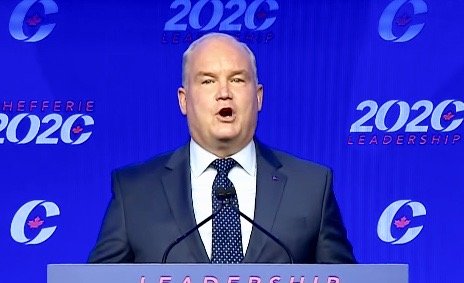 August 26, 2020 (LifeSiteNews) – Erin O’Toole, the new leader of the Conservative Party of Canada (CPC) who touted his Catholic faith during the leadership campaign, doubled down on his pro-abortion and pro-LGBTQ position, saying he won the party leadership as a “pro-choice Conservative MP.”

“I am a MP with a clear track record for standing up for human rights, whether it’s women, whether it’s the LGBTQ community. I won the leadership of the Conservative Party as a pro-choice Conservative MP, won with a strong mandate,” O’Toole said at his first press conference as leader of the party held yesterday.

“That’s how I’m going to lead as the leader of the opposition and that’s how I will be as prime minister. I’m in politics to defend the rights of Canadians and secure a brighter future,” he added.

Jack Fonseca, Campaign Life Coalition’s (CLC) director of political operations, told LifeSiteNews that O’Toole’s doubling down of his pro-abortion stance “comes as no surprise,” but it is disappointing that he supports “preborn child murder.”

“His statement comes as no surprise. We already knew that O’Toole believes that killing babies in-utero is ‘a right’ and that he subscribes to the unscientific Theory of Gender Identity, which claims that a person’s brain can be ‘trapped in the wrong body,’” Fonseca told LifeSiteNews.

“Although not a surprise, it’s still disappointing that he doubled down on his support for preborn child murder and transgender ideology so soon after Leslyn’s and Derek’s down ballot support crowned him leader.”

The CPC elected pro-abortion O’Toole, a former member of Canada’s air force, as the new leader of the party early Monday morning.

O’Toole beat out the mainstream media favorite Peter MacKay on the third ballot in a close race. The only two pro-life candidates in the running were Derek Sloan and Toronto lawyer Leslyn Lewis, who combined took home a total of 35 percent of the vote on the first ballot.

Sloan managed to win 14.4 percent of the vote on the first ballot and was subsequently the first candidate to be removed. Sloan recently told LifeSiteNews that he has “no regrets” and will “never back down” in speaking out for social conservative issues.

During this leadership campaign, O'Toole, who was raised Catholic in Montreal, posted faith-filled messages on his Facebook page to highlight the Easter season.

CLC gave O’Toole a red-light rating and an “F” score as an “unsupportable” candidate to vote for due to his pro-abortion and support for transgender ideology.

In an April 5 message on Facebook, O’Toole posted a note to mark the beginning of Holy Week, which included an image of a cross with the message, “May God bless you, your families, and our country.”

In an April 12 Facebook post, O’Toole sent out a message to celebrate the risen Christ on Easter Sunday.

“Do not be afraid, for I know that you seek Jesus who was crucified. He is not here; for He has risen…. Happy Easter!” O’Toole wrote.

In a March 19 message on Facebook, O’Toole “invited” all Catholics to join with him in asking for the protection of Canada’s patron saint, St. Joseph, in a message that included an image of the holy family.

“I invite all Catholics to join with me today to ask for the protection of Canada’s patron saint,” O’Toole wrote.

O’Toole’s support of abortion is at clear odds with the official teaching of the Catholic Church.

The Catholic Church officially teaches that abortion is always wrong because it takes the life of an innocent human being, which violates the Church’s ban of murder (Catechism of the Catholic Church (CCC) 2270-2272).

“Human life must be respected and protected absolutely from the moment of conception,” states CCC 2270.

CCC 2271 continues, “Since the first century the Church has affirmed the moral evil of every procured abortion. This teaching has not changed and remains unchangeable.”

At his Tuesday press conference, O’Toole was asked in French if he “owed” anything to social conservatives, after taking the leadership, answering that he will treat everyone with “respect.”

“I will treat all of our members with respect,” O’Toole said.

“As I said in English, I was elected as a pro-choice MP with a clear position with regard to public safety.”

O’Toole was also asked about Sloan by reporters and whether or not he would “sanction him” for his views.

“There are pressures, there can be little fights, but that’s over,” O’Toole said.

“We are united as a party now, and I will speak to Derek and to all of the members during my first meeting with them.”

In the June CPC French leaders’ debate, O’Toole said he would defend women’s “right” to “choose for themselves” to have an abortion should he become prime minister.

During his leadership campaign, O’Toole said that he would allow his fellow Conservative MPs and any future cabinet ministers, free votes on “moral issues” such as euthanasia and abortion.

“One hoped for a smidgeon of gratitude and respect towards the thousands of social conservative voters that were transferred to him upon Leslyn’s elimination,” Fonseca told LifeSiteNews.

“I would caution O’Toole that if he keeps denigrating the beliefs of the party’s socon base this way, he’ll find himself in the same situation as Scheer: losing to Trudeau in the general election because he utterly demoralized the party base who then decided not to bother recruiting their friends, relatives and members of their church to go vote Conservative.”