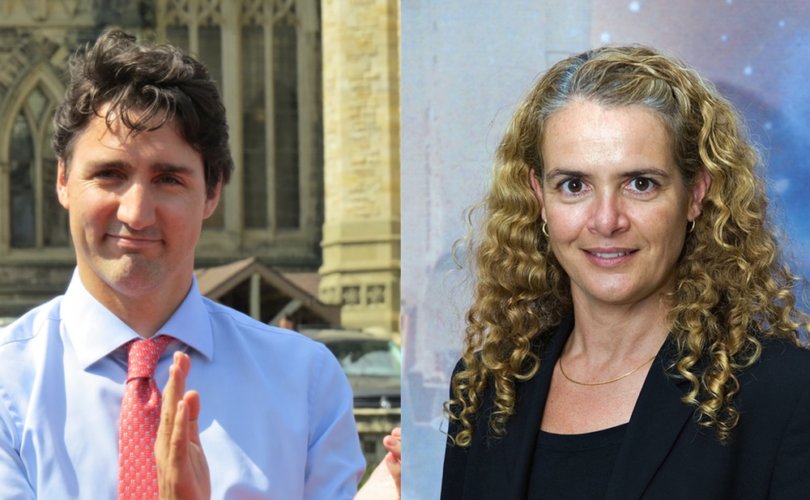 OTTAWA, November 6, 2017 (LifeSiteNews) — Prime Minister Justin Trudeau defended his newly appointed governor general after she was lambasted in the press for mocking those who believe God created life.

Julie Payette, the 54-year-old engineer and former astronaut from Montreal who was installed as the Queen's representative in Canada last month, derided religious faith in a speech at an Ottawa science convention on Wednesday.

“Can you believe that still today in learned society, in houses of government, unfortunately,…we are still debating and still questioning whether life was a divine intervention or whether it was coming out of a natural process let alone, oh my goodness, a random process,” Payette said, in what Canadian Press reported as an “incredulous voice.”

She also ridiculed belief in astrology, homeopathy, and suggested the debate on climate change was done.

“Can you believe that…we’re still debating and still questioning whether humans have a role in the Earth warming up or whether even the Earth is warming up, period?” she asked.

Trudeau defended Payette when questioned by reporters the next day.

“We are a government grounded in science. Canadians are people who understand the value of science and knowledge as a foundation for the future of our country,” the prime minister said.

“And I am extraordinarily proud of the strength and the story of our Governor General, Julie Payette, who has never hidden away her passion for science and her deep faith that knowledge, research and the truth is a foundation for any free, stable, successful society,” added Trudeau.

“And I applaud the firmness with which she stands in support of science and the truth.”

Trudeau's response, “as per usual, is rather vague and inchoate,” says John Paul Meenan, assistant professor of theology and natural science at Our Lady Seat of Wisdom College, and editor of the online journal Catholic Insight.

That a government is “grounded in science” depends on “what you mean,” Meenan told LifeSiteNews in an email.

“Science is one path to truth, and therefore should be one of the primary and fundamental ways that governments set policy (e.g., public health, infections, the effect of drugs and incarceration, educational policies and such),” he said.

“If we substitute 'reason' for science, then we can use the distinction made by Pope John Paul II in Fides et Ratio, that science and faith are two pathways to the truth, complementary, dependent one upon the other. Faith, even at the natural level, in terms of trusting the evidence of others, and even that of our senses, is necessary for science,” explained Meenan.

“The question of supernatural faith is, of course, a controverted one, for by definition, what we believe transcends the senses and reason, but does not contradict them,” he added.

“She seems to think that the only path to knowledge is science, and mocks any other method. Faith she puts down there with astrology and horoscopes,” he said.

“It seems that the Liberals are removing faith as an access to truth, which would mean we are no longer a Christian nation, in a very clear and direct way. This would be secularism, wherein the only 'truth' is that limited to this world alone,” Meenan said.

“And that always has very, very bad consequences, as we have already seen in abortion and euthanasia. But more is on the horizon, unless we return to the faith,” he noted.

“As Pope Leo XIII wrote in Immortale Dei, 'a society without religion can never be well-governed',” Meenan pointed out.

“As we lose our religion, we will lose our society.”

Meanwhile, Conservative leader Andrew Scheer responded to the controversy by denouncing Trudeau’s comments in a Facebook post as “offensive to millions of Canadians” who do believe in God.

“It is extremely disappointing” Trudeau “will not support Indigenous peoples, Muslims, Jews, Sikhs, Christians and other faith groups who believe there is truth in their religion,” wrote Scheer.

“Respect for diversity includes respect for the diversity of religious beliefs, and Justin Trudeau has offended millions of Canadians with his comments.”

And pundits blasted Payette for her remarks, pointing out the governor general’s office is apolitical.

“If this how Madame Payette feels about religion that is her business but as the Queen’s representative it is not her role to mock religious belief,” wrote conservative commentator Brian Lilley.

“I should also point out that the Queen herself is the head of a religion, the Anglican Church, that believes in this idea Payette just mocked,” he added.

“It seems that our esteemed vice-regal has a simplistic view of the interplay between science and religion, that they cannot co-exist. You meet these people all the time, they yell about Galileo but ignore hundreds of years of fides et ratio [faith and reason] working side by side.”

The “observations on the origins of life and the religious understandings of that most profound of subjects are not in contest, as evidently [Payette] thinks they are, with scientific understandings,” Murphy wrote in the National Post.

“They can, and in fact often do, co-exist. There is physics, and there is also metaphysics; facts are indeed truth, but truth is very often more than just facts,” he wrote.

“Faith has its ‘knowing’ and it is not the same as the ‘knowing’ of science, and to make science with a capital ‘S’ the singular aperture by which we may know all of life and the world is itself a secular heresy, which we know as Scientism,” Murphy pointed out.

And a “backhand dismissal of the ‘truths’ of religion, and the clear implication that they are the products of credulousness and ignorance,” he added, “is a sophomoric indulgence.”