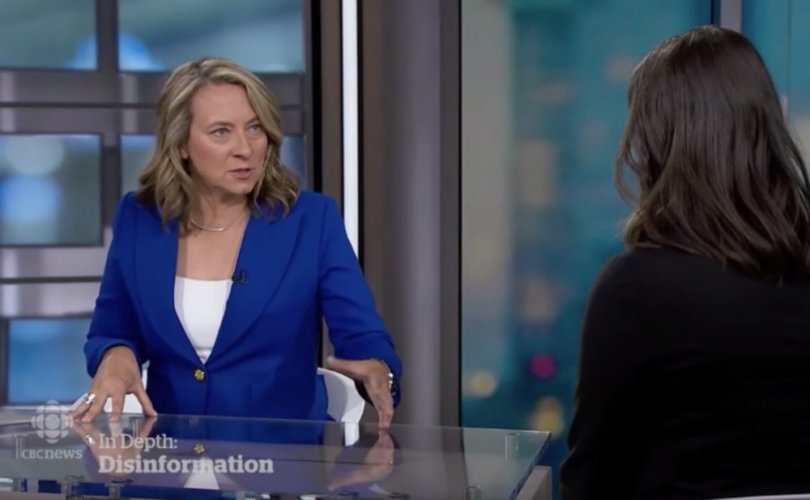 October 2, 2019 (LifeSiteNews) – On September 18, Canada’s state-funded broadcaster, the Canadian Broadcasting Corporation, aired a segment on their nationally-broadcast flagship news program, The National, accusing LifeSiteNews of playing a leading role in the spread of fake news and misleading content. It was a classic mainstream media hit piece, masquerading as investigative journalism.

LifeSite's Managing Editor, Patrick Craine, breaks it down in this video, showing that the CBC is the real agent of “disinformation.” (See full transcript below.)

On September 18, Canada’s state-funded broadcaster, the Canadian Broadcasting Corporation, aired an 8-minute segment on their nationally-broadcast flagship news program, The National, accusing LifeSiteNews of playing a leading role in the spread of fake news and misleading content.

Entitled “How a real story turns into online disinformation,” the segment was a classic mainstream media hit piece, masquerading as investigative journalism.

LifeSiteNews has had incredible growth in the last 12 months, and, by God’s grace, our impact is growing and growing. So it’s inevitable that our enemies would start to take notice.

But despite the CBC’s intention, the segment gives a good glimpse into how LifeSite has increasingly been able to drive stories and take a lead in framing the narrative on major news items with a social conservative lens.

The CBC could not, of course, directly accuse us of fake news because we set high editorial standards and strive as best we can to be painstakingly factual. But they insinuate that LifeSite is “fake news” by trying to show that our reporting somehow led to fake news reporting.

They highlight an over-the-top headline at another outlet, and purport to show that LifeSite helped spawn it. They claim that we got the ball rolling in a chain of “disinformation.”

I want to walk you through this story and how it developed so you can see that it’s actually the CBC that is “the agent of disinformation” here. This instance is relevant and important because it shows the deep bias of the mainstream media and how they are trying to weaponize the “fake news” phenomenon against their ideological opponents, to get conservative media shut down by Facebook, Google, and other tech giants.

So here’s what happened.

On March 20, 2019, Ontario politician Roman Baber introduced a private members bill in the Ontario legislature that would ban any demonstrations outside the legislature that the Assembly’s Speaker deems to be promoting hate speech or inciting violence. The bill passed second reading and is now before a committee.

When social conservatives in Ontario got wind of the bill, they were incredibly alarmed because we are increasingly seeing our causes denigrated as expressions of “hatred.” Campaign Life Coalition, the largest pro-life group in Canada, denounced the bill out of concern that it could be used by ideologues to ban rallies opposed to radical sex ed or the LGBT agenda.

Faithful to our mission, we ran a story on April 16 reporting on the facts of the bill, and highlighting the legitimate concerns of social conservative activists. We ran another op-ed against the bill on May 9 by social conservative advocacy group Real Women of Canada. An article at The Post Millennial by lawyer John Carpay, president of the Justice Centre for Constitutional Freedoms, also gets a mention by CBC.

Baber, the bill’s author, told the CBC that he’s targeting rallies that have happened previously at the legislature that called for murder – obviously vile events. His motives for the bill here are good – the rallies he’s describing are evil, and they should not be allowed. A rally calling for the murder of anyone is deplorable, and should be shut down at Queen’s Park, or anywhere.

But there are real concerns about how such a bill will also be used against people of faith and social conservatives in a culture and political climate that’s increasingly attacking Christian moral teachings by labelling them as hate.

The CBC completely ignores these concerns and essentially accuses LifeSite of whipping up people’s emotions to drive traffic. They even bring on a supposed “expert” to drive home the point.

However, Christians have every reason to believe that bans on “hate speech” will be used to ban our points of view. There is no disputing that in the eyes of Canada’s liberal politicos and elitist commentariat, we are “homophobic” and “anti-women,” among many other slurs.

And government institutions are increasingly using the power of the state to shut us down and to indoctrinate vulnerable children in schools to become hateful, leftist culture warriors against social conservative persons.

In 2013, the Supreme Court of Canada ruled unanimously that a Christian activist’s condemnation of homosexual behavior made him guilty of hate speech. They ordered the activist, Bill Whatcott, to pay a fine, and hundreds of thousands of dollars in court costs. Whatcott is known for his direct style of activism and explicit signs, but he emphasizes that his outreach is rooted in love for homosexual persons and his desire to save them from a deeply damaging lifestyle. However, the nation’s highest court ruled that the classic Christian distinction, “love the sinner, hate the sin” no longer applies.

In June 2019, Toronto Police arrested street preacher David Lynn for speaking out against homosexuality in Toronto’s gay village, indicating they were investigating him for a hate crime.

In 2018, the Supreme Court of Canada ruled against a Christian marriage covenant at the Evangelical Trinity Western University’s law school, affirming that it was okay for the Law Societies in Ontario and British Columbia to reject their graduates.

There are numerous other examples, but suffice to say, we have every legitimate reason to think that a ban on “hate speech” at the Ontario legislature will eventually be used to target Christian beliefs.

“If anti-sex ed protests were deemed ‘homophobic’ or ‘transphobic’ based on a politically motivated definition of hate, or a single unofficial misplaced sign, or even infiltration by activists seeking to discredit pro-family protesters, they could be prevented by politicians or even security at Queen's Park.”

“In fact, we do not think this is a slight possibility but a probability, considering how easily the terms ‘homophobic’ and ‘transphobic’ are thrown at pro-family activists and citizens.”

Now, after we reported on the Ontario bill, the message spread far and wide and generated interest across the border in the U.S. The CBC video highlights the fact that our articles were picked up by a U.S. conservative outlet. That article, which got even more social media interest than ours did, heavily quoted us, but oversimplified it in a way that sensationalized the story. Yet CBC blames LifeSite for it.

The headline, at Big League Politics, oversimplified the story considerably. But LifeSite’s articles did not instigate that, as CBC claims. We reported on, and ran, legitimate and serious opinions about the possible dangerous implications of the bill. That is standard practice for news agencies, including the CBC. The CBC just doesn’t like the particular opinions we ran.

Ironically, CBC’s own so-called expose on “disinformation” was in fact guilty of grievous “disinformation” itself. Sadly, this level of disinformation from Canada’s state-funded broadcaster is no surprise. In fact, it is par for the course. CBC, supposed paragon of objectivity and watchdog against journalistic bias, is infamous as a propaganda arm for liberal ideology.

I’ve often said that just as LifeSite is devoted to social conservative advocacy journalism, the CBC is ideologically committed to pro-abortion, pro-LGBT advocacy journalism. When the CBC runs a story on abortion, they can be relied on to give quotes that are solely drawn or heavily drawn from pro-abortion sources. While LifeSite is upfront that we are a news agency on a mission to defend the right to life, the truth of the natural family, and the freedom to express and promote our faith in the public square, the CBC falsely holds itself up as the gold standard of objectivity and impartiality.

Let’s not forget, this impartial media agency is the same one that has repeatedly mocked Christian beliefs, used its news service to promote abortion, euthanasia, and all manner of evil for decades, and this year released a documentary called “Drag Kids” that featured kids doing sexualized dance moves for the entertainment of adults.

The CBC’s brand of sanctimonious bias came through in a special way in October 2018. On the phone with LifeSite reporter Lianne Laurence, they touted their impeccable editorial standards as the reason for ignoring a viral story we broke showing an attack by a male abortion activist against a female pro-life demonstrator.

This viral video was picked up by big media across the world, including the Washington Post, Newsweek, Huffington Post, msn.com, Canadian Press, National Post, and the U.K.’s Independent. It was widely reported by local media, including Global, City News, CTV, the Toronto Star, and the Toronto Sun.

But the hugely government-funded CBC, with their massive team of reporters in Toronto, managed only a 226-word article that didn’t mention the video, or the attacker, even though he had already been named by police. CBC didn’t just ignore the story. In emails to LifeSite, they defended the fact that they ignored it.

A producer told LifeSite that CBC has “journalistic practices and standards. Not every news organization in Toronto has that, but as the public broadcaster, we do. So I would have had to have seen the video to verify it as well. … We have a bar to meet. Just because a video goes viral doesn’t mean it becomes news and that we cover it.”

CBC is selective about its editorial standards, however. And they seem to be far less choosy when it comes to attacking Christians and pro-life people of faith. In January 2019, after the U.S. March for Life in Washington, D.C., they were happy to rush to judgment against the pro-life young men of Covington High School on the barest of evidence: namely, a selectively filmed viral video.

The next time CBC journalists feel the itch to expose some “disinformation,” they would do well to look in-house.