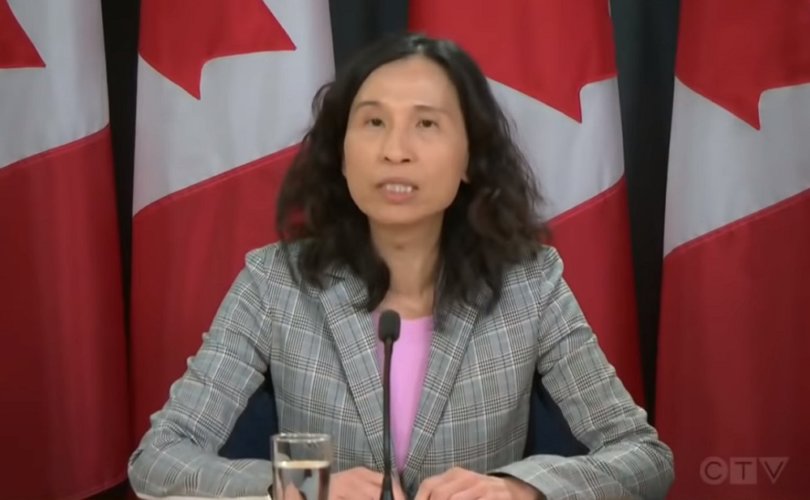 “Our role is simply to provide scientific information about the effectiveness of vaccines, for example,” said Tam. “It is up to the employer and treasury board to make those decisions.”

Tam noted that Canada is in a “period of uncertainty where the virus is still undergoing evolution,” and then said that getting booster shots and wearing a mask “is still a really good idea.”

She said that “all of that should be taken into account as the employer or the federal government looks at the policies going forwards.”

Tam said, when asked by a reporter about vaccine mandates, that she knows “those policies are under evaluation or review including, for example, the federal mandates for the federal workers.”

“I encourage Canadians to show each other compassion and respect as we make decisions to protect ourselves,” she added. “These times of transition can be challenging and stressful to navigate.”

Tam’s remarks come after over a thousand federal workers have been suspended without pay because they chose not to get the COVID jabs or disclose whether they had them as per the Privacy Act, according to Blacklock’s Reporter.

Starting November 15, 2021, most federal employers were mandated to disclose their COVID jab status. Those without the jabs were not allowed to work and were placed on leave. According to Blacklock’s Reporter, a total of 1,084 employees and 27 in the health department were suspended as a result.

Canada’s Minister of Transport Omar Alghabra said recently that the vaccine mandate for travel by air, rail, and boat, for now, will remain in place.

Canada is the only major nation in the world that has banned the unvaccinated from traveling by air within and outside the country.

The Canadian government of Prime Minister Justin Trudeau last August announced that Canadians traveling by air, rail, or sea, both domestically and internationally, must have the experimental COVID jabs, or they would be barred from those means of travel.

Starting April 1, the Canadian federal government is lifting a COVID testing directive for fully-jabbed travelers entering Canada; however, the unvaccinated still are unconstitutionally banned from leaving the country by air.

Canadians who are not jabbed but who are allowed to enter the county by air as per the Charter of Rights must still take PCR or rapid antigen tests, which costs hundreds of dollars. They then must quarantine for two weeks.

An official House of Commons petition backed by CPC MP Tom Kmiec is demanding that  Trudeau “abolish” a rule that bans the vaccine-free from traveling by air. It currently has over 16,400 signatures.