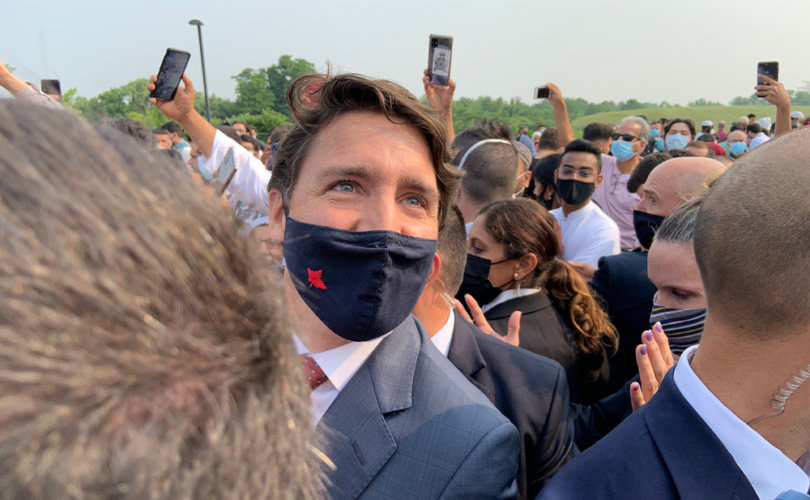 CAMBRIDGE, Ontario, August 31, 2021 (LifeSiteNews) – Justin Trudeau will apply what his government “learnt” from the COVID-19 crisis to the “climate crisis” should he be re-elected as Canada’s prime minister on September 20.

“And what we learnt … to the housing crisis, to reconciliation, to making sure that everyone has good jobs and careers that carry them through and create opportunities for their kids,” Trudeau said Sunday at a campaign stop in Cambridge.

Trudeau was showcasing his Liberal Party’s radical “climate plan” that would ban the sale of new gas-powered vehicles from 2035 onward and subsidize at a heavy taxpayer expense electric cars, which some studies have shown are worse polluters than those that run on gasoline.

Trudeau’s green plan would also introduce more carbon taxes and target Canada’s oil and gas sector, which thousands rely on for their livelihoods.

During Sunday’s press conference, protesters were heard shouting in the background, calling out their displeasure with Trudeau. Sirens were also heard, which Trudeau compared to the “climate emergency.”

“I hear you hear the sirens in the background. They remind us that this is a climate emergency, that’s why we will move faster and be bolder, because as you remind me, every single day, you as young people from coast to coast to coast, yes, this is an emergency, and no half measures won’t do,” Trudeau said.

Freeland said the “global economy is going green” and “we have to help the whole Canadian economy make that green transition.”

“That is what our government is committed to doing,” Freeland said while promoting the Liberal “climate plan.”

Freeland is a member of The World Economic Forum (WEF) Forum’s Board of Trustees.

The WEF is an organization that pushes many radical and left-leaning agendas, including linking the COVID-19 crisis to the “climate crisis.”

In a piece last year, the WEF wrote that “strong leadership will be needed to tackle climate change,” which was born out of “local governments, cities and businesses” having “taken responding to COVID-19 into their own hands.”

The same piece linked five “things COVID-19 has taught us about fighting climate change,” one of which was promoting a “green recovery” as something “coming out of the COVID-19 crisis.”

Trudeau claimed his government was “bold” in countering the “crisis of COVID,” adding it will rebuild better for the “coming years” should the Liberals be in power after the 2021 Canadian federal election.

Archbishop Carlo Maria Viganò has called out the so-called “Great Reset” agenda, which is the brainchild of WEF executive chairman Klaus Schwab, in an open letter to Donald Trump last year.

Viganò spoke about the dangers of the Great Reset, calling it a plan made by the global elites to “subdue all of humanity, imposing coercive measures with which to drastically limit individual freedoms and those of entire populations.”

“Until a few months ago, it was easy to smear as ‘conspiracy theorists’ those who denounced these terrible plans, which we now see being carried out down to the smallest detail,” Vigano wrote. “No one, up until last February, would ever have thought that, in all of our cities, citizens would be arrested simply for wanting to walk down the street, to breathe, to want to keep their business open, to want to go to church on Sunday.”

According to a Wall Street Journal report from July, global debt levels are at their highest point since the Second World War, due largely to governments printing money at will in response to COVID-19 lockdowns they implemented.

Schwab is an advocate for big government spending. He has argued through articles, speeches and a book titled “Covid-19: The Great Reset” that the COVID crisis should be used as a tool to start his “Great Reset” agenda to “revamp all aspects of our societies and economies, from education to social contracts and working conditions.”