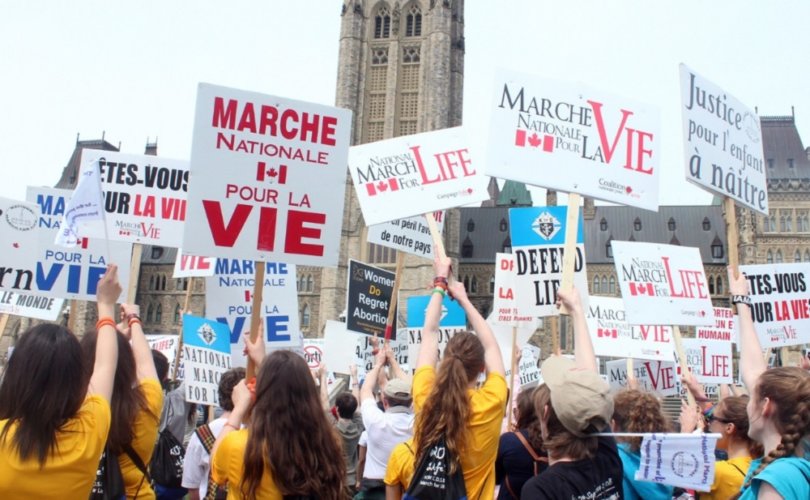 OTTAWA, Ontario, May 11, 2020 (LifeSiteNews) –  Campaign Life Coalition’s 23rd annual Canadian March for Life kicked off yesterday, this time with a virtual twist because of the ongoing coronavirus crisis. At the first event, more than 3,100 tuned in to view a free screening of global pro-life advocate Obianuju Ekeocha’s documentary Strings Attached.

The Virtual National March for Life kick-off event last night saw such a high demand that for a brief time, the site, marchforlife.ca, crashed.

“It’s great that so many people tuned in but also because of the crash and the 30 minutes it took to fix the issue, we lost a lot of viewers,” said CLC vice-president Matt Wojciechowski to LifeSiteNews.

“We decided to keep up the film overnight for those who weren’t able to access it and for our friends on the west coast, and by the time we took the film offline this morning, we had more than 3100 viewers. Amazing stuff.”

CLC became aware of the crash and were immediately on a fix, said Wojciechowski.

The CLC YouTube channel had the video feed and worked fine for the entire kick-off event.

CLC decided in April to hold this year’s March for Life virtually, as the coronavirus health restrictions on public gatherings made it impossible to hold the event as usual in Ottawa.

CLC will be uploading last night’s National March for Life Kick-Off program today (without the film Strings Attached) on the March for Life Canada’s YouTube channel.

Wojciechowski also noted that if you missed the free-screening, the film can be viewed for a small fee at stringsattachedfilm.com.

Ekeocha, who is the film's executive producer, said via Twitter today that she was amazed at the film's view rate.

“Wow! Over 3000 joined us for last night’s online screening of Strings Attached. Thank you so much!” said Ekeocha.

CLC is the largest leading national pro-life and pro-family political lobbying group in Canada. The CLC  virtual Canadian March for Life started yesterday and will continue until May 15. This year’s theme is “Be not afraid Canada!”

Despite being in a virtual format, the 2020 March for Life will replicate many of the March’s usual mainstays, such as the candlelight vigil, Masses and services taking place the morning of the event, as well as a rally before the March.

The “virtual” march will take place this Thursday on May 14. This day is chosen for the March as it is the same day 51 years ago in 1969 when abortion was legalized in Canada. This was the day when then Prime Minister of Canada Pierre Trudeau (Justin Trudeau’s father), passed a heavily criticized Omnibus Bill, which amended the Criminal Code to allow abortions to be done in hospitals.

The court encouraged the Canadian Parliament to come up with replacement abortion legislation. This effort failed when then Prime Minister Brian Mulroney’s draft law failed in a Senate tie vote. Canada has since had no abortion law at all, and thus abortion is permitted up through all nine months of pregnancy.

Today is the second day of the 2020 Virtual National March for Life and will feature two pro-life movies, Crescendo and Sing a Little Louder. Additionally, there will be a conversation with the pro-life activist, film producer, and founder of Movie to Movement, Jason Jones.

Tuesday’s film is titled Fatal Flaws: Legalizing Assisted Death. It will be followed by a conversation with Alex Schadenberg, who is the executive director of the Euthanasia Prevention Coalition.

All films will be streamed live at marchforlife.ca starting at 8:00 p.m. EST. One can also tune into CLC’s YouTube channel to watch as well.

The pro-life Mass in memory of Fr. Alphonse de Valk C.S.B at will take place on Wednesday at 6 p.m. EST, followed by the virtual Candlelight Vigil for victims of abortion which starts at 8:00 p.m. EST.