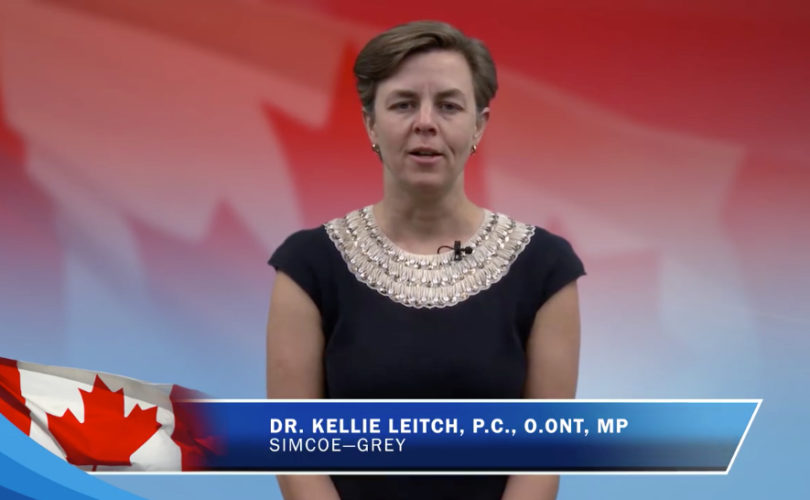 COLLINGWOOD, Ont., Oct.2, 2015 (LifeSiteNews) –It’s election time and Conservative MP and Status of Women Minister Kellie Leitch wants to be known as pro-life, despite a voting record suggesting the contrary.

Speaking at an all candidates’ meeting in her Simcoe-Grey riding, Leith responded to a question from the moderator as to what each candidate would do to “protect life, old and young,” with the declaration, “I am pro-life,” and connected it to her work as a paediatric surgeon.

“Hopefully, now that pro-lifers in Leitch’s riding have heard her say that she too is pro-life, they’ll encourage her to align her actions in the House of Common with her stated pro-life principles. Ordinary constituents now have a good opportunity to encourage her take a more pro-life stance in Parliament, than she has in the past.   We can also hope that other pro-life candidates will be encouraged too, by her coming out to openly declare their own support for life,” Fonseca said.

But in its detailed audit of Canada’s politicians, the Campaign Life Coalition does not award Leitch the green light it gives pro-life candidates and MPs, but rather bestows the more ambiguous orange light indicating that “voters should be cautious about this politician,” whom the CLC is “still evaluating.”

Meanwhile the Abortion Rights Coalition of Canada puts Leitch firmly on its list of “anti-choice MPs”  but, perhaps unique among those on that list, the ARCC reports not a single pro-life activity to justify her rating.

Nonetheless Leitch reportedly—and unhesitatingly–told  this week’s all-candidates meeting in Collingwood, Ontario that “a big part of that ” –being pro-life–“is because I spent a significant part of my professional career taking care of disabled kids—children  that have reached amazing potentials because they were born.”

Fonseca says that this a solidly pro-life statement and one she is welliqualified to give as “respected paediatric surgeon.” The problem is that it is belied by her actions. “She voted against Stephen Woodworth’s Motion 312,” he noted. This was the Kitchener MP’s 2012 effort to create a committee to examine what science has to say about when a fetus becomes a human being.

But there is more; Leitch also voted for Bill C-279 – the infamous “Bathroom” bill extending rights to so-called “transgender” persons and, according to CLC’s audit, she “undermined family values and public decency by personally marching in Toronto's homosexual Pride Parade. The homosexual pride parade also features significant advocacy to legalize prostitution and to embrace socialism as a political system.”

Her current CLC rating has been changed to: “Evaluation pending.”

The idea of a minister of women’s equality who is pro-life understandably grates with the abortion movement. Its leading spokesperson, Joyce Arthur, executive director of the Abortion Rights Coalition of Canada, told LifeSiteNews, “Of course, it’s completely inappropriate for the Women’s Equality Minister to have a stance against women’s equality, but not the least bit surprising.

“This is the Harper government after all, which does six inappropriate things before breakfast every day, and has always been very hostile to women’s rights. The government would never have revealed Leitch’s stance at the time she was appointed because this is the most deliberately non-transparent and secretive government in Canada’s history.”

But Fonseca disagrees. “A woman’s minister who is pro-life is completely appropriate. The ability to bring life into the world is so integral to being a woman that I would see being pro-life as a natural fit for her ministry.” Moreover, said Fonseca, being pro-life also promotes equality. “More than half the unborn babies being aborted in Canada are female, because of gendercide. So a pro-life position is even more protective of women.”