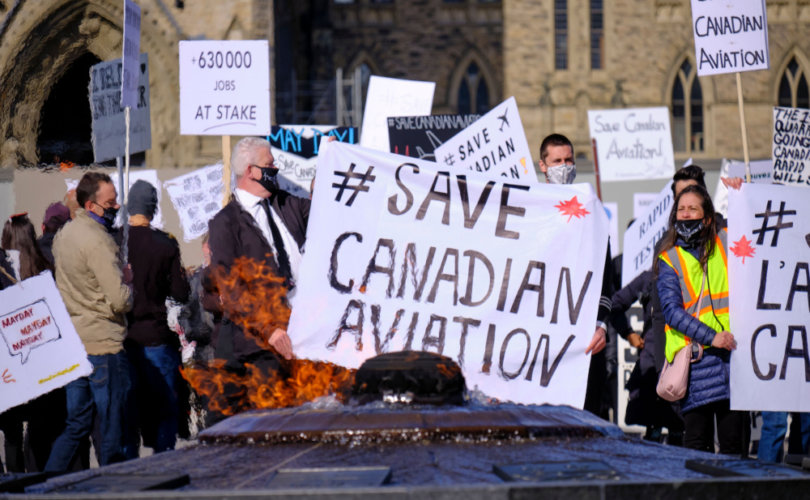 (LifeSiteNews) – The Canadian group Free to Fly, which for some time now has been advocating for “freedom of medical choice,” announced that they have retained a prominent lawyer to move into a “new phase” in seeking justice for aviation workers wronged due to COVID mandates.

Greg Hill, who works for a major Canadian airline as a pilot and who has 13,000 flying hours under his belt, helped found Free to Fly. As co-director of the group, Hill noted that British Columbia lawyer Umar Sheikh will help them in a large-scale legal fight to seek justice for aviators wronged by mandates.

“It’s about getting us back to the place where we don’t descend into authoritarian tyranny, which seems to be the current trend,” Hill told LifeSiteNews.

“At this point, we are bringing in our aviation professionals … The scope of it (the group’s pending lawsuits) is massive in scale. There will be multiple lawsuits.”

Hill told LifeSiteNews that the case is “not simply a single filing class-action” lawsuit but is “a multi-faceted approach.”

“Right now, we are in the stages of gathering all of their evidence through our members, some of whom will be signing up in single campaigns, and then various filings will ensue,” Hill said.

Hill added that it’s “time to hold these people to account.”

He told LifeSiteNews that Free to Fly represents over 3,000 supporters from 20 different companies involved in the aviation sector in Canada.

According to Hill, the “vast majority of unions” representing those in the aviation sector in Canada “completely abrogated responsibly” to their members.

“It’s really a campaign that is very broad in scope,” he said.

According to Free to Fly “this past year, Canadian union representation largely chose the path of least resistance, failing to push back, grieve policy or take a collective stand against coercive mandates. Aviation unions and employers have been complicit in the most widespread violation of God-given freedoms in our modern history.”

The group said that they intend to “assist as many aviation professionals as possible, address the abdication of responsibility that left them exposed, pursue justice where harm has been done and ensure this never happens again.”

Hill stressed to LifeSiteNews that their legal campaign will not be limited to the “unvaccinated” but is open to tens of thousands of aviation employees “who were coerced into a medical procedure” through government and industry mandates.

While there is no firm timeline as to when the lawsuits will be filed, Hill said that he hopes it will “be soon.”

Pilot: ‘It’s about fighting for our freedoms so that this never again happens’

Hill was placed on unpaid leave for a time for refusing to go along with COVID mandates. Currently, due to the mandates being “suspended” on June 20, he is hoping to soon get back into the air.

Hill told LifeSiteNews the the fact he is allowed to begin flying again will not take away his fight against holding “those to account” who were responsible for the mandates in the first place.

Hill said  that for a lot of pilots like him who are now allowed back to work, adjusting from having “moved on” from flying planes to being forced to do manual labor to pay the bills is not an easy task.

“Guys are grateful they are coming back, but at the same time, there’s this looming cloud that is kind of like, are we going to back for two months and then ushered out the door again because there is another scary variant?” Hill told LifeSiteNews.

“We are called to be adults in the room. My goal right now is to maintain the exact same standard that I’ve always expected of myself as a professional aviator,” he said

Hill said that the overall goal of taking legal action is “never again.”

“This isn’t just about aviation employees, it’s about employees across the nation because we live in society of a legal framework where precedent matters, so if you can establish a precedent with a win, to say this is ‘wrong, these people are due recompense for the harm suffered,’ the other companies are going to wake up and say, ‘that looks expensive and untenable. Let’s not do this again,’” Hill told LifeSiteNews.

“So that’s our goal is not to just look after ourselves but to handle this very carefully so that we can gain some wins.”

Hill noted that “90 percent” of the group’s goal over the past year “is to impact culture.”

“As we have seen over the last few months, society is starting to say, ‘hang on, it doesn’t make sense anymore,’ right?” Hill said.

This policy resulted in thousands losing their jobs, or being placed on leave, for non-compliance.

Trudeau “suspended” the COVID travel vaccine mandates on June 20. However, those without the jabs still must quarantine for two weeks upon return home.

A group of active and non-active WestJet employees suing the airline and Canadian federal government over forced COVID jab mandates in the aviation sector has swelled to 140 people, with hopes to add even more.