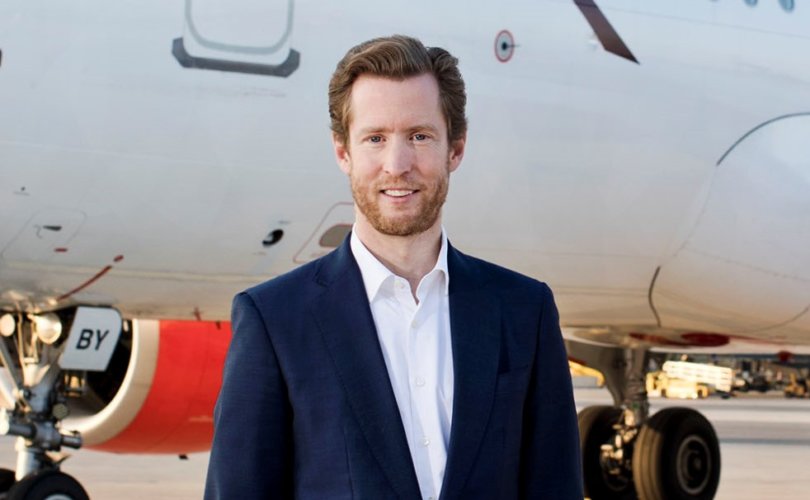 (LifeSiteNews) – The Canadian group Free to Fly, made up of pilots and airline workers who lost their jobs for not complying with airline COVID vaccine mandates, blasted WestJet’s rehiring process for the vaccine-free as unethical, hypocritical, and a violation of one’s rights.

On Tuesday, Free to Fly took a shot at new WestJet CEO Alexis von Hoensbroech for the airline going beyond government recommendations last year in implementing a company jab policy.

The group took issue with the fact that von Hoensbroech welcomed the dropping of all COVID mandates by the federal government.

“Why did you exceed Transport Can reqmts, place employees on unpaid leave, FIRING anyone who did not reveal private medical info? Those employees? STILL fired & you refuse to bring them back unless they cede rights to justice.”

On Monday, von Hoensbroech put out a statement saying that he welcomed the news that Canada, effective October 1, would be ending all remaining COVID travel mandates, including a jab mandate for foreigners entering the county.

“Today’s announcement aligns with the travel policies of other major nations, reflects our industry’s outstanding commitment to safety, and recognizes that air travel is no less safe than any other consumer activity,” von Hoensbroech said.

“We are relieved our guests can finally travel with additional confidence and certainty, knowing they can make decisions that are the best for them, and their travel plans won’t be interrupted.”

The group Free to Fly, which includes many WestJet pilots who lost their jobs due to choosing to not get the COVID jabs, shot back at von Hoensbroech’s statement. The group highlighted serious concerns over the company’s rehiring process for the vaccine free.

“Even now (after lauding changes to mandate policy) these remain the internal demands at @WestJet for employees fired for not disclosing private medical info who want their jobs back. Please show some strength of character and change this, @AHoensbroech,” tweeted Free to Fly.

The group shared a screenshot of what it says are WestJet’s demands in the rehiring of those who lost their jobs for not taking the COVID shots.

“Anyone fired from WestJet for not disclosing vax status must agree,” the document reads, to “settle all outstanding grievances related to the vaccine mandate you have against the Company.”

Additionally, one must “forego a claim for back pay during your absence,” as well as agree “that in the event that the vaccine mandate is re­implemented by the Federal Government, that you will agree to being placed on unpaid leave.”

The list of WestJet’s demands continues, with a fourth demand stating that one must complete an “attestation indicating whether you are or are not fully vaccinated (meaning two doses of an approved vaccine).”

A fifth demand says that a returning employee must also agree to “conform to Transport Canada’s requirement to be masked while in the airport and onboard an aircraft.”

LifeSiteNews contacted WestJet’s media relations department to ask them about the rehiring demands to confirm that they are as what Free to Fly posted online. As of publication time, there has been no reply.

Greg Hill works for a major Canadian airline as a pilot and has 13,000 flying hours under his belt. He helped found Free to Fly and is co-director of the group.

Hill was placed on unpaid leave for a time for refusing to go along with COVID mandates for airline workers. Currently, due to the mandates being “suspended” on June 20, he is hoping to get back into the air soon.

He told LifeSiteNews that WestJet’s rehiring demands seem to in effect make it so that one cedes all their rights.

“We are finally on the same page, that air travel is no less safe. However, how do we rectify the wrongs done,” Hill said.

“So far, some of the WestJet colleagues remain unemployed, but to say can get your job back provided you essentially cede all rights to justice over the past year, I would say for the most part, not too many guys are willing to take that offer from what I’ve been told.”

He said to LifeSiteNews that, “on behalf of thousands of” airline workers who were affected by their employer’s COVID jab mandates, to have “the argument come back from these corporate leaders they wash their hands” now of any wrongdoing is “absurd”

“Nothing was stopping you from publicly stating in calling out these mandates. Why did you not do that,” Hill asked.

“You should have been part of the solution, instead of just going along with the government mandates.”

On Monday, the Canadian federal government announced an end to remaining COVID mandates in Canada regarding travel. Starting October 1, masks on planes and trains will be optional, there will be no more COVID testing, and vaccine-free Canadians will no longer be subject to a mandatory quarantine.

Canada’s much-detested ArriveCAN travel app will be also made optional, and a mandate that foreigners must be jabbed to enter Canada is expected to be gone.

Last year, all Canadian airlines in place mandatory jab policies for all staff, even before the government made it mandatory. Many lost their jobs as a result.

Last month, Hill told LifeSiteNews that he has spent “hours” on the phone speaking with pilots who now have health issues as a result of getting the COVID shots.

Hill noted that the silence from the corporate leaders and union leaders after the mandates took effect was telling.

He did say that some credit at least should go to von Hoensbroech, who in the past few months has been calling for an end to the travel mandates.

It should be noted that von Hoensbroech only became WestJet’s CEO earlier in the year. Before his role with WestJet, he served as CEO of Austrian Airlines.

On Monday, Canada’s largest airline, Air Canada, said they welcome “the removal of these restrictions, acknowledging that air travel is safe and that the measures were not justified by science.”

Hill noted that like WestJet, Air Canada seems to be “washing its hands clean” now from having enacted internal policies that went above and beyond what the government at the time had called for.

The group Free to Fly last month announced that they have retained a prominent lawyer to move into a “new phase” in seeking justice for aviation workers wronged due to COVID mandates.

A group of active and non-active WestJet employees are suing the airline and Canadian federal government over forced COVID jab mandates in the aviation sector.

The first crack in the Trudeau government’s insistence on keeping travel vaccine mandates came in June after the government announced a “suspension” of the COVID jab mandate for travelers and federally regulated transportation workers.

Last fall, Prime Minister Justin Trudeau announced a mandate that anyone traveling by air, rail or sea would need the COVID shots to travel both domestically and internationally.

Last week, a federal judge said she will reserve her decision on whether to allow legal proceedings to go ahead against the Canadian government’s travel vaccine mandates.