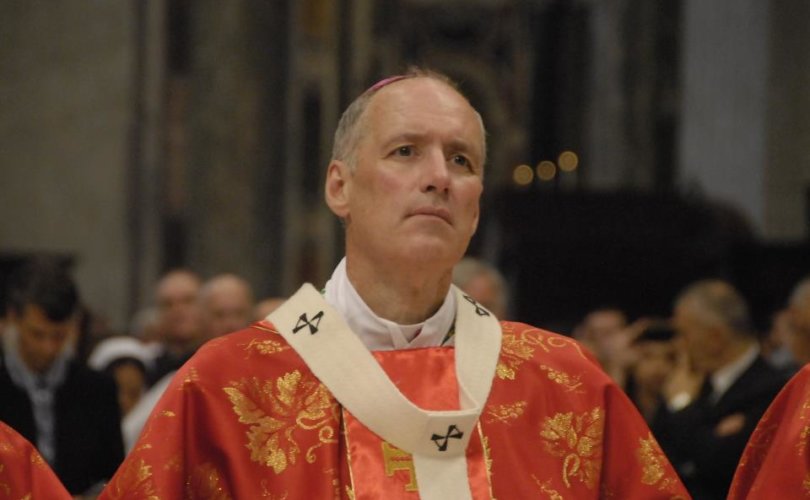 GATINEAU, Quebec, September 23, 2016 (LifeSiteNews) — A Canadian archbishop is defending an award he received Thursday night from a dissident U.S. Catholic group for his work in promoting female deacons within the Catholic Church during the 2015 Family Synod in Rome.

“I believe in building bridges. I believe in dialogue. I might not agree with everything [FutureChurch] espouse[s], and you might not agree with everything I do, yet it is important that in the Church we never stop reaching out to each other and working together for the greater good whenever we can,” Archbishop Paul-André Durocher of the Gatineau diocese in Quebec said during his acceptance speech.

But Michael Hichborn, President of the Lepanto Institute, told LifeSiteNews that “nothing good can come from ‘building bridges’ with an organization founded and rooted in heresy.”

“Our first parents, who were in a state of perfect intellectual integrity, fell from grace because of their ‘dialogue’ with one whose intentions were dishonest from the beginning,” he said, adding, “His Excellency should consider that no canonized saint ever sought dialogue with heretical sects but rather condemned their errors and called them to renounce their false ideas and embrace the Church in all Her glory.”

The Archbishop joined the FutureChurch ceremony via Skype to accept the “Father Louis J. Trivison Award” and shared with the group the reason behind his Synod proposal on female deacons.

Durocher said that while the “central topic” of his intervention was the “victimization of so many women within their marriages,” he felt that the Church could “not really speak with credibility on this issue” unless the Church restructured itself to “recognize and celebrate the inherent dignity of all women.”

“So I suggested we seek ways to listen to the voices of women in our reflections on scripture, in our governance structures and, finally, by studying the possibility of ordaining women to the permanent diaconate,” he said.

Pope St. John Paul II decreed for all time in his 1994 apostolic letter Ordinatio Sacerdotalis that the “Church has no authority whatsoever to confer priestly ordination on women and that this judgment is to be definitively held by all the Church's faithful.” Following the example of Christ in selecting male apostles as the first priests, the Catholic Church holds that only a baptized man can validly receive sacred ordination. Because the diaconate is a part of the sacrament of holy orders, only men are permitted to be ordained deacons. While some scholars argue for a female diaconate by pointing to women in the early Church who appeared to function in that office, others argue that such women played a distinct role necessary for the times, but as a non-ordained minister.

Durocher admitted in his speech that he accepted the award knowing full well that FutureChurch advances positions “that run counter to the Church’s teaching, particularly on the issue of the access of women to the priesthood.”

Hichborn said the Archbishop’s acceptance of the award indicates a “crisis in the Church that has reached fever pitch.”

“Has Archbishop Durocher no fear of God? The Archbishop should be condemning FutureChurch, not appearing to endorse it by accepting it's accolades,” he said.