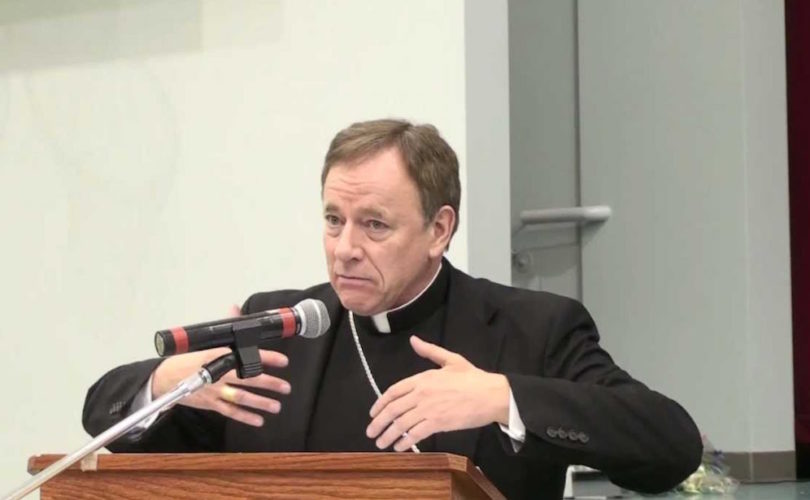 VANCOUVER, British Columbia, May 6, 2020 (LifeSiteNews) — Vancouver Archbishop Michael Miller is donating to a University of British Columbia research team working to develop a vaccine for COVID-19, but only after first ascertaining it will not be derived from aborted fetal cells.

“May the search for COVID-19 solutions also be a moment of solidarity, of collaboration, and of growing together as a visible sign to the world of the healing and reconciliation so needed right now,” Miller said last week, as reported in the B.C. Catholic.

The archbishop donated to the research of Vancouver immunologist Dr. Wilfred Jefferies and his team at the University of British Columbia (UBC), which has been working for several months to develop a vaccine for the coronavirus, it reported.

Ryan Thomas, a special adviser to the archdiocese, told Catholic News Agency that the archbishop made inquiries to be sure that UBC’s vaccine research team does not use aborted fetal cells.

Miller made the donation because he wanted to demonstrate that the Catholic Church supports science and medicine that contribute to the benefit of humanity, and because he believes it’s important that the Church be seen promoting research into a vaccine that Catholics can support in good conscience, Thomas told CNA.

“The Church — as Pope Francis has said from the beginning of his pontificate — is called to go out, we're called to engage, not called to retreat,” said Thomas, who did not reveal the specific amount of the contribution but said it was in the thousands of dollars.

“From a scientific standpoint, that means identifying the research that is worthy of our investment, that meets the high standards that we have to protect life,” added Thomas.

A group of Evangelical Christians and Catholics in Vancouver who wanted to support an ethical vaccine presented Miller with the idea of donating to UBC’s research, CNA reported.

Jefferies, a professor in UBC’s Michael Smith Laboratories and a senior research scientist in the university’s Vancouver Prostate Centre, is using a component called adjuvants that was discovered by UBC researchers in creating and testing his vaccine candidates, according to BC Catholic.

Adjuvants “boost the immune response and enhance longer-lasting immunity and have been tested in other experimental vaccines, for viruses such as influenza,” Jefferies said.

“We know that we can achieve optimal immune responses at low doses using this class of engineered vaccines. We are applying those technologies to COVID-19,” he added.

“Overall, this vaccine approach has the potential to overcome a major obstacle in vaccine development for large global populations by reducing the dosage of vaccine required for complete protection, thereby reducing costs and manufacturing time, and ultimately, saving more lives.”

He also hopes the vaccine will protect against different strains of the virus, which originated in Wuhan, China, that may mutate over time.

“I think the response by the archdiocese is an affirmative and practical way to address the critical need in our society to develop a vaccine,” Jefferies told CNA. “I am sincerely humbled by the support we have received from the archdiocese and from other groups and individuals.”

According to CNA, there are at least 1,000 clinical trials currently taking place around the world to test potential Wuhan virus vaccines.

Last month, U.S. Catholic bishops and pro-life leaders sent an open letter to federal health authorities and the Trump administration asking them to ensure that Americans will have access to coronavirus vaccines that are “free from any connection to abortion.”

“No American should be forced to choose between being vaccinated against this potentially deadly virus and violating his or her conscience,” said the letter, which was addressed to Stephen Hahn, the Commissioner of the U.S. Food and Drug Administration (FDA).

The letter was signed by Archbishop Joseph Naumann of Kansas City, Kansas, head of pro-life activities of the American bishops’ conference, as well as Bishop John Doerfler of Marquette, Michigan; Oklahoma City Archbishop Paul Coakley, and pro-life leaders from around the United States.

The signatories pointed out that federal funding was recently granted to a vaccine development project that is making use of cell lines from an aborted baby. Last month, Janssen Pharmaceuticals, Inc. (Johnson & Johnson) received more than $456 million in federal funding for their vaccine project using the PER C6 cell line, which comes from retinal tissue from an aborted baby.

The authors also noted that “other vaccines such as those being developed by Sanofi Pasteur, Inovio, and the John Paul II Medical Research Institute utilize cell lines not connected to unethical procedures and methods.”

The Congregation for the Doctrine of the Faith’s 2008 document Dignitatis personae condemned aborted fetal tissue research but stated, inexplicably, that for “grave reasons” such as “danger to the health of children,” parents could be permitted make use of a vaccine that had been “developed using cell lines of illicit origin” while “keeping in mind that everyone has the duty to make known their disagreement and to ask that their healthcare system make other types of vaccines available.”

Meanwhile, discussions of the role of a vaccine in containing the threat of the Wuhan virus can take on sinister overtones as the pandemic continues, with Massachusetts Institute of Technology (MIT) researchers suggesting embedding vaccine records “directly into the skin” of children, Canada’s Prime Minister Justin Trudeau mulling whether or not to make a COVID-19 vaccine mandatory, and Bill Gates — whose foundation invests in vaccines — suggesting life will not get back to normal “for some time” — or at least until the population is “widely vaccinated.”