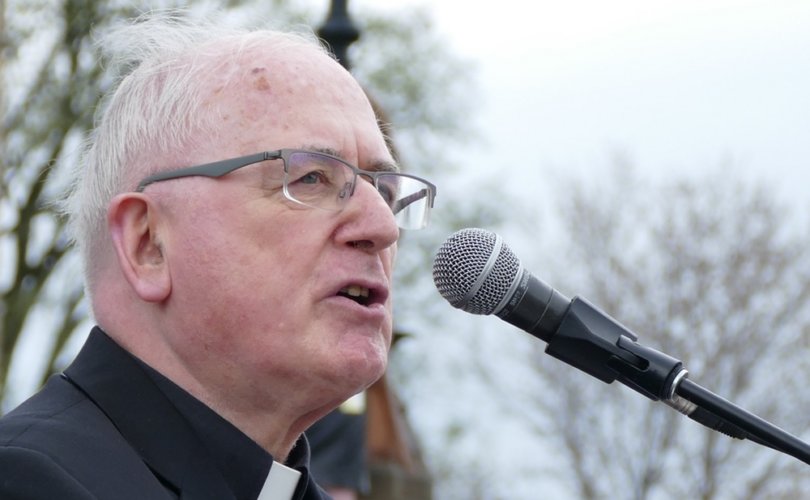 Ottawa Archbishop Terrence Prendergast speaks at the March for Life on Parliament Hill on May 10, 2018.Patrick Craine / LifeSiteNews

OTTAWA, May 23, 2018 (LifeSiteNews) — Catholic teaching on intercommunion can’t change whether or not German bishops reach a consensus to allow it, says Archbishop Terrence Prendergast of Ottawa.

“This kind of open communion is against Catholic teaching and from what I can see in non-Catholic congregations that follow a discipline of ‘open communion,’ it is also spiritually and pastorally unfruitful,” the Jesuit archbishop told the Catholic Register’s Deborah Gyapong in an interview.

“It is puzzling to learn that the Holy Father told the bishops that whatever they determine is acceptable as long as they all agree,” he said.

“Even more important is the challenge to remain faithful to Catholic doctrine and not to propose practices that undermine the faith, and the need to foster loyalty and communion with the universal Church.”

Three-quarters of the German bishops voted in February on a proposal to allow non-Catholic spouses to receive Holy Communion under certain circumstances, but a minority disagreed.

When a delegation of German bishops both for and against the proposal went to Rome May 3 for direction, the prefect for the Congregation for the Doctrine of the Faith relayed the message from Pope Francis that they return home and seek “unanimous” agreement, if possible, on the question.

In response, Cardinal Willem Eijk, Archbishop of Utrecht and head of the Catholic Church in the Netherlands, asked the pope to clarify the matter an open letter May 5.

Eijk’s letter explained both the Catechism of the Catholic Church and Canon Law do not permit intercommunion with Protestants.

In the English-version of his letter published by the National Catholic Register, Eijk wrote he found the pontiff’s response to the German bishops “utterly incomprehensible,” and warned the pope could be setting the Catholic Church on a “drift to apostasy.”

Prendergast told the Catholic Register the intercommunion debate hits the limit of what the Church can propose in varying pastoral practices.

“Pope Francis is right when he says that not every theological debate needs to be settled by authoritative interventions of the papal magisterium,” Prendergast said.

“And Cardinal Eijk is right when he says that the question of intercommunion is a doctrinal matter that cannot be settled by an isolated decision of a national conference of bishops.”

The question of intercommunion with Protestants “is, in fact, a classical situation of discerning between things that are changeable — or possible — and others that are not,” the archbishop observed.

“It seems clear by now that many bishops and Catholics in the world consider ill-advised and doctrinally impossible what a number of bishops in Germany have proposed,” he said.

The German bishops’ majority voted that a Protestant spouse be granted permission to receive Holy Communion if, after a “serious examination” of conscience with a priest or another person with pastoral responsibilities, he or she could “affirm the faith of the Catholic Church,” wished to end “serious spiritual distress,” and had a “longing to satisfy a hunger for the Eucharist.”

At the time, Cardinal Reinhard Marx, president of the German bishops’ conference, made clear the proposal did not require the Protestant spouse to convert to Catholicism.

“Receiving the Eucharist is intrinsically linked to the faith, my personal faith and the faith of the community to which I belong,” Prendergast pointed out.

Prendergast noted the “church is a close-knit network,” and people in his archdiocese are asking about the intercommunion debate.

It’s a chance for Canadian Catholics to look at their own practices regarding Communion, he said.

Catholics in Canada “generally know that receiving communion requires belonging to the Church, among other things,” he said. “This discipline is well-known and widely appreciated in our parishes.”

But there is a need to teach Catholics about the benefits of going to Mass without receiving Communion and what it is “to be properly disposed and in the state of grace,” Prendergast told the Catholic Register.

Catholics often come to church after years of not attending receive communion “as a matter of course,” he said.

“Formalism and cultural routine alone will not cut it…Receiving communion has to make a difference in our lives, and be meaningful. Otherwise we are deceiving ourselves, and as pastors we are deceiving others,” the archbishop pointed out.

“In Holy Communion we receive the Lord, and so, to receiving worthily, we need to be fully open to Him and connected to His Church, visibly and invisibly, institutionally and internally. That and nothing less is Catholic teaching.”