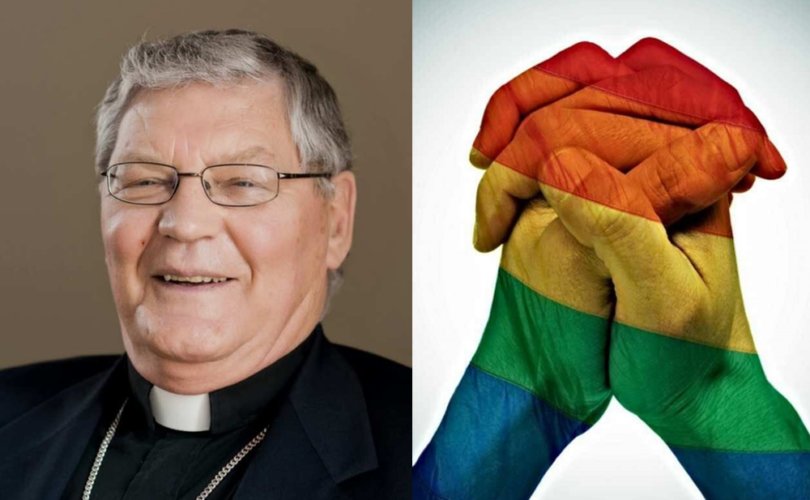 ST. JOHN’S, Newfoundland, June 29, 2017 (LifeSiteNews) — A Canadian Catholic archdiocese has announced in its bulletin that a pro-homosexual “Pride … multi-faith service” will take place next month at a Catholic retreat center run by religious sisters within the archdiocese.

A priest in the Archdiocese who is on the committee organizing the event has previously criticized Catholic teaching on marriage and sexuality as “embarrassing” and as an attempt to “suppress” homosexuals who “wish to live a more open, honest and healthier lifestyle.”

“As part of the St. John’s LGBTQ+ Pride Celebrations this year, there will be a second Multi-Faith Service. People of faith will come together to share their reflections on the theme: Moving Forward with Hope,” states the bulletin.

“We will have people from various faith traditions joining together to witness, share stories, sing hymns of joy and to celebrate our common desire to move forward with hope. Come join us in this moment of faith and hope to help us build our welcoming and loving community,” it adds.

The event is scheduled for July 13 at 7 p.m. at The Gathering Place, a Catholic retreat center run by the Presentation Sisters. St. John’s Pride, one of the province’s foremost pro-homosexual group, lists the pro-gay “Multi-faith Service” in their July calendar of events. The event is listed as being organized by an “affiliate.” Joanne Thompson, the retreat center’s executive director, told LifeSiteNews that The Gathering Place has nothing to do with the event itself, except for providing a place for it to happen.

Fr. Paul Lundrigan, a committee member who is helping to organize the event and who is also the pastor of Holy Trinity Parish within the Archdiocese, told LifeSiteNews that the Pride Multi-Faith Service is “an opportunity to come together and not teach doctrine or promote one point of view or another, but to listen and to share faith.”

Asked if the event would have any place for the Christian teaching against homosexuality, especially as found in St. Paul’s letter to the Romans — where the Apostle speaks about homosexual acts as “unnatural” and “shameless” — Fr. Lundrigan replied that the passage “is not a clear condemnation of homosexuality.”

“There are some who feel differently about that,” he said, adding that Biblical texts can be interpreted differently depending on the “translation that you use” as well as the “cultural context” in which the passage was written.

Asked if the Church should change its teaching about homosexual acts being “objectively disordered” and same-sex attraction being “intrinsically disordered,” Fr. Lundrigan replied: “I don’t think that [changing it] is necessarily a bad thing.”

“There are many things that people are questioning in the Church. I think it's a wonderful thing to have a dialogue,” he added.

Fr. Lundrigan said the “statement or wording” of Catholic teaching on marriage as being between a male and a female is a “small 't’ truth” that can be “open to interpretation.”

“It's not like this was a teaching that was established in the time of Christ, or in the first three centuries, or by the Council of Nicea, or even by the Council of Trent. It was just never considered. It’s only in recent centuries — there were actions taken, there were things that were said — but there was no official teaching written down regarding these issues of sexuality,” he said.

Fr. Lundrigan said that if the Holy Spirit were directing the Church under Pope Francis to change it’s teaching on homosexuality, then “it would be wrong to fight against it.”

This is not the first time Fr. Lundrigan has made statements about marriage and sexuality that do not align with what the Church teaches.

In 2003, Fr. Lundrigan was reprimanded by then-Archbishop Brendan O'Brien after criticizing in a Sunday sermon the Church's teaching on marriage being between a male and a female, not between two members of the same sex. He told CBC News at that time that he found it “embarrassing” to hear Canadian bishops speaking out against the government’s homosexual “marriage” bill that he said would “allow people to get on with their lives.”

“So, while I cannot perform same-sex marriages, neither can I support the institution of the Roman Catholic Church in its efforts to suppress those who wish to live a more open, honest and healthier lifestyle,” he said at that time.

LifeSiteNews asked Archbishop Currie by phone and email about using his bulletin to direct Catholics struggling with same-sex attraction to an event where Catholic teaching on sexuality and marriage is dismissed. His secretary, Janet Stead, told LifeSiteNews that the Archbishop had received the communications but had “no comment.”

Archbishop Currie has a checkered past when it comes to Catholic teaching on homosexuality. He told CBC News in 2014 around the time of the Vatican Synod of the Family that he hoped the Church could “find some accommodation where [same-sex] unions are accepted and respected and they can have a part in the church life.”

Earlier this month, Cardinal Robert Sarah, Prefect of the Vatican’s Congregation for Divine Worship and the Discipline of the Sacraments, wrote in a foreword to a book on the Christian understanding of homosexuality that it is a disservice to same-sex-attracted people to withhold Catholic teaching on sexuality.

“[The Church teaches] … things in the Catechism about homosexuality that some members of the clergy choose not to quote, including the clear warning: ‘under no circumstances can [homosexual acts] be approved’ (CCC 2357),” he wrote.

“The respect and sensitivity to which the Catechism rightly calls us does not give us permission to deprive men and women who experience SSA (same-sex attraction) of the fullness of the Gospel. To omit the ‘hard sayings’ of Christ and his Church is not charity,” he added.

The Cardinal’s message is backed by the experience of same-sex-attracted Catholics who decided to live as active homosexuals after having their same-sex inclination and actions affirmed by dissenting pro-gay clergy.

Ex-homosexual David Prosen wrote this month that being told by a Catholic priest that he could have sexual relations with a man as long as the desire was based in love ultimately left him feeling “hurt and abandoned by shepherds in my Church.” The message conflicted with what he knew to be Catholic moral teaching and made it difficult for him to “stay in a Church” after he rediscovered Jesus Christ and give up his homosexual lifestyle.