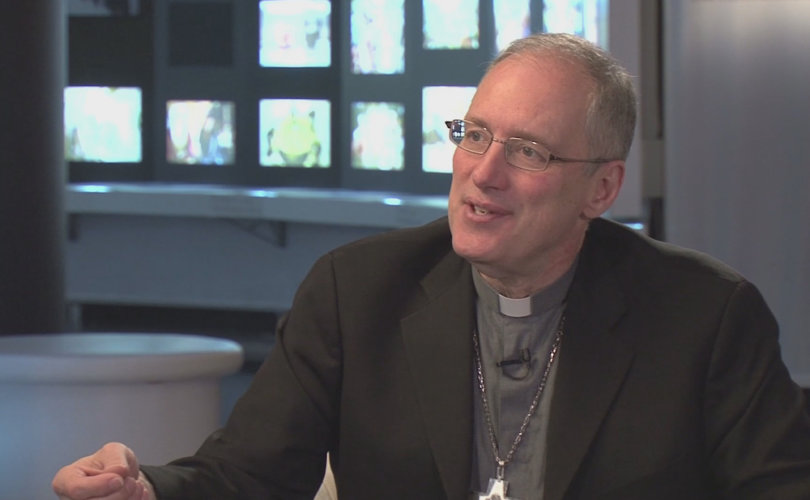 March 5, 2019 (LifeSiteNews) –  The time has come to take women’s place in the Church “seriously,” according to the Archbishop of Gatineau, Québec. The French-speaking bishop, Paul-André Durocher, openly promoted the idea of a female diaconate that would include the celebration of the sacraments of baptism and marriage.

He was speaking on Radio Canada’s Sunday evening chat-show, Tout le monde en parle (“Everyone’s talking about it”), where he had been asked to comment on the recent Vatican Summit on sexual abuse.

Archbishop Durocher made clear that he would have women play a ministerial role in the Church besides taking up increased down-to-earth responsibilities. “If women were deacons, for instance, they would have the power to celebrate marriages and to baptize. They would be part of management teams. I think that would be a first step,” he said.

This goes beyond the role deaconesses are purported to have played as “helpers” of the Christian community in the early centuries of the Church. Nowadays, male deacons, be they permanent or preparing for the priesthood – in which case, they promise to remain celibate –, are ordained ministers and have the power to celebrate the sacraments of marriage and baptism as well as being allowed to preach during mass.

The diaconate — being in this sense an element of Holy Orders — has been reserved for men in the same way and for the same reasons as the priesthood, which configures the ordained priest to Jesus-Christ himself, who was a male according to the flesh.

It is the same logic that traditionally prohibits girls from being altar servers and from playing a public role in the church as lectors or ministers of Holy Communion – although these traditions are often breached in the new Roman rite.

Durocher was somewhat circumspect in his statement, but went several steps further than previous trial balloons he had sent up on the same subject on previous occasions. Last Sunday on Radio Canada, he discreetly raised the even more controversial issue of women priests, stating that as far as priests are concerned, reality is more complex. “The problem on that level is that the Pope has said that that could not change, that women could not be priests. The only way for that change would be for there to be a plenary council of all the bishops on that issue, and that won't happen for a long time,” he said, noticeably avoiding any statement on the radical impossibility of allowing women into the priesthood.

The Archbishop of Gatineau clearly wants to move forward in stages. He is of the opinion that “we should work now on what we're capable of doing,” in particular in the local churches, in order to make clerical institutions more egalitarian.

The idea of promoting women in the church is not a new one for Paul-André Durocher. A prominent member of the Catholic hierarchy in Canada – Durocher, 64, is a former president of the Canadian bishops’ conference –, he was present at the second Synod on the family in 2015 in Rome where he devoted his own three-minute intervention entirely to the “place of women” in the Church.

At the time, he suggested allowing them to hold decision-making positions within the Church and to have access to the permanent diaconate, making a distinction between “ministry” and “priesthood”: “It's a just question to ask. Shouldn't we be opening up new venues for ministry of women in the Church?”

He also brought up the question of preaching by women – going directly against St. Paul's ban on women teaching within a church –, by asking the Synod fathers to “look at the possibility of allowing married couples (…) to speak during Sunday homilies so that they can testify, give witness to the relationship between God's word and their own marriage life and their own life as families.”

When Pope Francis decided in 2016 to create an official commission charged with reflecting on the question of the “ordination of women deacons”, Paul-André Durocher was enthusiastic. “I'm very happy with this initiative,” he said.

The whole idea of promoting women to liturgical service that is ever closer to the ordination of women priests is slowly but surely gaining ground under Francis’ pontificate. In February 2017, Cardinal Gianfranco Ravasi, president of the Pontifical Cultural Council, said in an interview with katholisch.de that he thought “a diaconate for women would be possible.” Explaining that he has himself created a council of 35 women who are charged with “reading and evaluating” everything done at the Pontifical Cultural Counsel – this sounds a lot like the “gender mainstreaming” promoted by the UN – he showed himself open to discussion.

“But of course it has to be discussed, the historical tradition is very complex. In general, I think, constantly fixing on the women's priesthood is clerical. Why do we not start talking about other, very important functions of women in the church? For example, the leadership of a parish, from a structural point of view. Or the field of catechesis, volunteering, finance, architectural planning, design. Why not give it into the hands of women? There could also be a stronger presence of women in the Vatican authorities, even at higher levels. That's what the Pope said. Of course, that does not work right away,” he said.

Here again, we have the tactics of small but significant steps and the idea that things can change drastically in the future. However, presenting women's work in the Church in the field of catechesis, volunteering, finance etc. as a novelty is obviously absurd. Countless women have not waited for cardinal Ravasi to be active in those fields. As for the spiritual leadership and charitable work offered by women from the humblest of nuns and consecrated virgins to the most powerful sovereigns, and even to the Virgin Mary herself, they have certainly shaped the Church and civilization itself from the very beginnings of Christianity.

At the other end of the scale, less than two weeks ago on February 20th, a group of seven parish priests in the north of France – mostly of the graying, young in the 1960s variety – published an open letter against “clericalism” in which they asked for more responsibilities to be given to laypeople, in particular through the creation of women deacons: “Nothing is preventing it, apart from mindsets,” they wrote, adding that the Church will most certainly die if it leaves all the work to be done by a dwindling number of priests.

At different levels in the church, the idea of a female ordained ministry is gaining momentum. The fact that we are nearing the special assembly of the Synod of Bishops in the Vatican for the Pan-Amazon region next October is probably not unrelated. Its preparatory document published in June 2018 suggested that women could play larger role within the Church by way of a special ecclesial “ministry.”

But what does the Amazon have to do with it? The answer probably lies in a footnote in the third part of the document: “Action. New paths for a Church with an Amazonian face.”

Having spoken at length of the “ancestral world-vision” of the aboriginal peoples of the Amazon Basin, the text states: “In the process of thinking a Church with an Amazonian face, we dream with our feet grounded in our origins, and with our eyes open we consider the future shape of this Church, starting from its peoples’ experience of cultural diversity. Our new paths will impact ministries, liturgy, and theology (Indian theology),” this last phrase being accompanied by a footnote.

The said footnote refers to the VIth Symposium on Indian Theology held in Paraguay in 2017 under the auspices of CELAM (Latin American Bishops’ Conference). From there on, it's just a question of unraveling a train of thought. What is Indian Theology? A short text by a progressive French Dominican Father, Alain Durand, offers a succinct answer: it is a form of Liberation theology – very close to the theology of the people dear to Pope Francis – where the importance of the Earth (Pachamama or Mother Earth) and of the community are clearly proclaimed.

And what does all this have to do with married priests (also a theme for the upcoming Synod) and the role of women in liturgy? Fr. Durand had this explanation regarding the equality between men and women in Indian theology: “Man and woman are made to live in harmony, never one without the other. The idea that a man or a woman should live without the person of the other sex is completely foreign to Indian culture. During liturgical celebrations themselves, it is necessary that women should have a function. You can immediately perceive the difficulty this creates for the access of natives to the Catholic priesthood. As I have heard it said by Samuel Ruiz: an Indian who is unmarried is not an adult Indian. The inculturation of the faith and of the Church requires the acknowledgment of this reality.”

The idea of the Synod, seen under this light, would not be to compensate for lack of priests or vocations, nor is it merely to take into the account the “central role which women play today in the Amazonian Church” as the preparatory document says in its paragraph 14. By the simple method of referring to Indian theology, the document discreetly points to a transformation of Catholic liturgy in order to make it palatable to traditional pagan spirituality that is profoundly marked by dualism, and in particular by sexual duality – all the more so that in the native religions of the Amazon, the fundamental divinity is the “Mother,” the life-producing Earth.