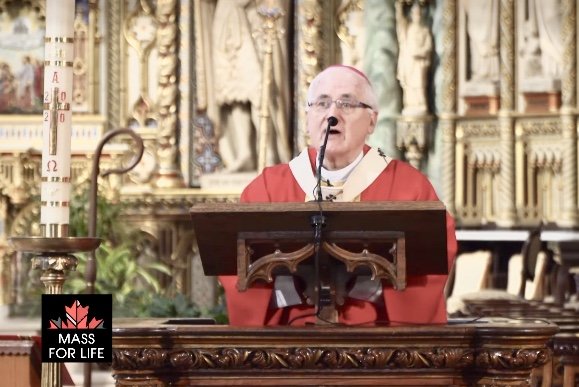 OTTAWA, May 15, 2020 (LifeSiteNews) –  Archbishop Terrence Prendergast of Ottawa said that trying to sell euthanasia and assisted suicide as a “solution” to a problem will lead to a different kind of “infection” in Canada of the continued devaluation of human life.

Prendergast said these words as part of his homily as the celebrant for the National Mass for Life, which was shown live from Ottawa’s Notre-Dame Cathedral on May 14 (watch video here beginning at minute 21:29). The National Mass for Life kicked off the fourth day of the 23rd annual Canadian March for Life. The event is taking place virtually this year because of the coronavirus.

Prendergast began the Mass by saying that the Canadian March for Life is a celebration to  “witness the God-given dignity of the human person from the moment of conception until natural death.”

Prendergast said the goal of the Canadian March for life is to seek an abortion-free Canada.

“We seek a Canada in which every unborn child is protected in law and welcomed into life,” Prendergast said, adding that we seek legal reforms and a spiritual culture renewal, and that the path will be hard but “we cannot give up the fight.”

Prendergast then shifted his sermon to focus on the issue of euthanasia and assisted suicide in Canada. He spoke of how the coronavirus has shown to be particularly deadly to the elderly.

“Selling euthanasia and assisted suicide as a solution to suffering is inviting a different kind of infection to sweep through our communities – the devaluation of human life out of the misguided quest for personal autonomy,” Prendergast said in his homily.

“I ask you, doesn’t every family deserve the right to the care that our elders need to sustain their lives, rather than an expedient means of ending it prematurely?”

Prendergast said the coronavirus has put a spotlight on the fact that Canada’s elderly need better palliative care, and we as a nation need to rethink this “precarious situation in which the elderly live.”

“We are called, dear brothers and sisters, to state boldly that consultations aimed at extending the scope of euthanasia and assisted suicide will place our frail senior citizens at even greater risk, as parliament now contemplates more accessible life-ending measures,” Prendergast said.

Prendergast added that better care for seniors should not be a “privilege” only for the wealthy, “but a basic right for all of our older people.”

Euthanasia was legalized in Canada by Justin Trudeau's Liberal Party in 2016 with Bill C-14. In February 2019, Bill C-7 was introduced, which further expanded on Bill C-14.

Bill C-7 came about as Trudeau's acceptance to a Quebec court decision last September. That ruling struck down the requirement that a person’s “natural death be reasonably foreseeable” to qualify them for death by lethal injection.

Alex Schadenberg, executive director of the Euthanasia Prevention Coalition, warned on day three of the 2020 Virtual March for Life that Canada was on track to become “worst” assisted suicide jurisdiction in the world.

More than a thousand people tuned in during day three of the march to view a screening of a powerful film that deals with the realities of euthanasia and assisted suicide.

For Sunday’s kickoff of the 2020 Virtual March for Life, more than 3,000 tuned in to view a free screening of global pro-life advocate Obianuju Ekeocha’s documentary “Strings Attached.” Sunday’s event saw such high demand that for a brief time the site marchforlife.ca crashed.

More than a thousand tuned in to view the films, which included a conversation with CLC’s global policy and advocacy adviser, Mattea Merta, and the producer of the film, pro-life activist and film producer Jason Jones, who is the founder and president of Movie to Movement.

Day four saw a pro-life Mass in memory of Fr. Alphonse de Valk, CSB, which was followed by the virtual candlelight vigil for victims of abortion.

After the airing of the National Mass for Life, many tuned in to view the Virtual March for Life event, which featured many prominent pro-life leaders, as well as current pro-life politicians in Canada who offered words of encouragement.

Campaign Life Coalition (CLC) decided in April to hold this year’s March for Life virtually, as the coronavirus health restrictions on public gatherings made it impossible to conduct the march in Ottawa.

CLC is the largest leading national pro-life and pro-family political lobbying group in Canada. The CLC virtual Canadian March for Life started Sunday and continued until May 15. This year’s theme was “Be not afraid Canada!”

Being in a virtual format, the 2020 March for Life replicated some of the March’s usual mainstays, such as the candlelight vigil, Masses, and a rally.

The “virtual” march took place on Thursday, May 14. This day was chosen for the March as it is the same day 51 years ago in 1969 when abortion was legalized in Canada. That was the day when then-Prime Minister Pierre Trudeau (Justin Trudeau’s father) passed a heavily criticized omnibus bill amending the Criminal Code to allow abortions to be done in hospitals.

This law remained in effect until the Supreme Court of Canada struck down the 1969 law as unconstitutional in the 1988 Morgentaler decision. The law was removed on a technicality, however. The court ruled that it violated a woman’s Charter right to security of the person since the law could not be applied equally across the country.

The court encouraged the Canadian Parliament to come up with replacement abortion legislation. This effort failed when then-Prime Minister Brian Mulroney’s draft law failed in a Senate tie vote. Canada has since had no abortion law at all, thus abortion is permitted through all nine months of pregnancy.