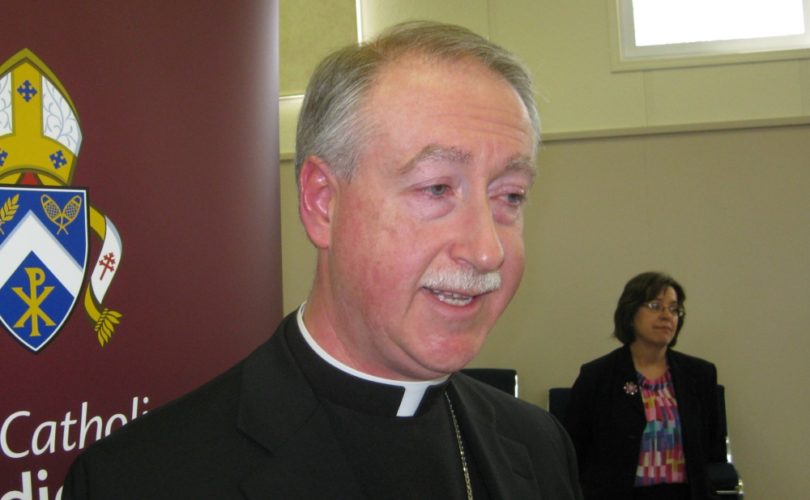 Edmonton Archbishop Richard Smith told colleagues at an annual meeting in Cornwall this week that it’s their job to challenge the current “cultural mindset” holding that what’s legal is “thereby ethical.”

“As bishops we need to speak very clearly now and underscore how morally reprehensible this situation is,” he said, according to Canadian Catholic News’ Deborah Gyapong. “We need to be speaking long term and in a sustained way, to keep alive the truth that this is completely morally unacceptable.”

“We have a role to speak now in the immediate circumstances,” he said.

The comments were given on Monday, the first day of the annual plenary of the Canadian bishops, in which the bishops discussed how they might fight euthanasia and assisted suicide.

Archbishop Paul-André Durocher, head of the archdiocese of Gatineau and president of the Canadian Conference of Catholic Bishops, called the Supreme Court’s decision to strike down the ban against euthanasia and assisted suicide a “deep cause of worry and concern.”

“The millennial wisdom of the Church compels us to see in this decision a radical shift that can inflect our society in a direction that disparages old age, disease and disability,” he said in his opening address to about 90 bishops and eparchs that attended the meeting.

Earlier this month Catholic bioethicist Moira McQueen turned down an invitation to sit on a government panel aimed at developing guidelines respectful of the Supreme Court ruling that would govern how doctors kill their patients, saying she would have no “formal co-operation with evil.”

“When something is really seriously wrong in the first place — Catholic teaching would call it intrinsically wrong — how can you mitigate the harm?” she told the Canadian Catholic News service. “It’s so wrong, no matter what follows from it, [this] is also wrong. I would call it formal co-operation.”

“I’ve been saying and we’ve been seeing for 10 years that safeguards don’t work. They are put in place and over time they evaporate. We saw the same thing in this country with abortion,” she said.

Archbishop Smith told his brother bishops at the meeting that even if Parliament manages to develop “restrictive legislation” within the one year imposed by the courts — coming to an end February 6, 2016 at which point patients can legally request death from their doctors — such legislation “will not survive the inevitable charter challenges.”

“Then it will be open season,” he warned.

Pro-life and pro-family leaders are asking the Canadian government to simply defy the Supreme Court ruling by invoking the “notwithstanding clause” in Section 33 of the Charter of Rights and Freedoms, which allows Parliament to override a court ruling. An online petition asking Parliament to block the Supreme Court ruling by using 'notwithstanding clause’ has been signed by almost 23,000 people.