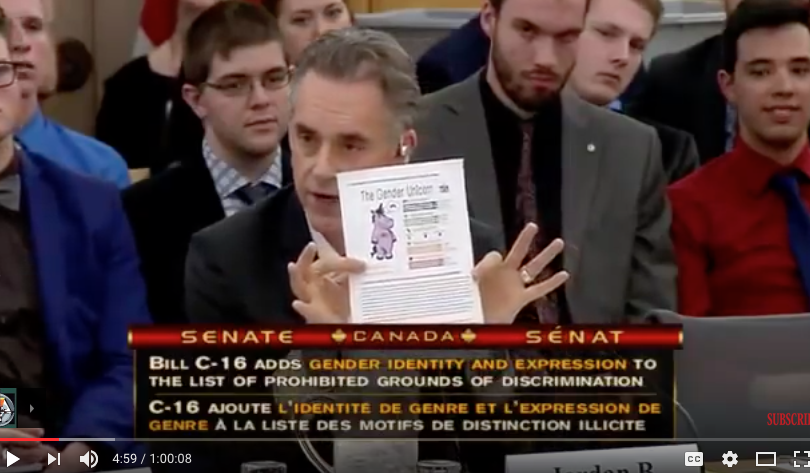 The Senate could vote as early as May 30 on Bill C-16, which adds “gender expression” and “gender identity” to Canada’s Human Rights Code and to the Criminal Code’s hate crime section.

Dr. Jordan Peterson and lawyer D. Jared Brown were among those warned the committee the bill is an unprecedented threat to freedom of expression and codifies a spurious ideology of gender identity in law.

Meanwhile, Campaign Life Coalition has issued an urgent call on Facebook for fasting and prayer that those senators in favour of the bill have a change of heart. As it stands, Bill C-16 is expected to pass.

CLC also commended Peterson for proving to be “a hero in this battle.”

A University of Toronto psychology professor, Peterson told the senate committee May 17 that “it’s unbelievably dangerous for us to move towards representing a social constructionist view of identity in our legal system.”

He believes “ideologues” are “using unsuspecting and sometimes complicit members of the so-called transgender community to push their ideological vanguard forward,” Peterson said.

“The fact that it’s potentially illegal for me not to participate in that is something that I think is absolutely dreadful. It puts a shudder in my heart as a Canadian that we could even possibly be in a situation like that.”

Peterson has become Canada’s preeminent critic of the Liberal bill after he produced three videos opposing the enforcement of gender ideology, one of which blasted Bill C-16, which he said “requires compelled speech.”

He also vowed he would not use “genderless pronouns” such as “zir” and “ze” for those who self-identify as gender non-conforming when requested.

Since then, the university sent him “two letters to cease and desist in my public utterances because they believed that not only was I violating the university’s standards of conduct but also the relevant provisions” of the Ontario Human Rights Code, Peterson told the committee.

The OHRC “explicitly states that refusing to refer to a person by their self-identified name and proper personal pronoun, which are the pronouns I was objecting to, can be interpreted as harassment,” he said.

“I think that’s appalling, first of all, because there hasn’t been a piece of legislation that requires Canadians to utter a particular form of address that has particular ideological implications before, and it’s a line we shouldn’t cross.”

Moreover, “the very idea that calling someone a term that they didn’t choose causes them such irreparable harm that legal remedies should be sought,” is an “an indication of just how deeply the culture of victimization has sunk into our society.”

Bill C-16 also “devolves into a kind of absurdity” because the Liberals did not foresee that there would be “an absolute explosion of identities, first of all, and also of so-called personal pronouns,” Peterson said.

“It has become linguistically unmanageable. Words can’t be introduced into the language by fiat.”

Jail for those who don’t comply

“What was happening is they weren’t defending the law but downplaying its effects. As a practising lawyer, any time a lawyer, and particularly an academic, says, ‘Look away; there’s nothing to see here,’ it gets my antenna way up,” Brown told the Senate.

“I’m not an academic. I live with my clients in the land of legal reality and how the law actually works,” he noted.

“I knew, as a commercial litigator, that anyone can end up in jail if you breach a tribunal order. It is a simple, civil, contempt-of-court process. People go to jail for this.”

The federal department of justice has made clear it will use the Ontario Human Rights Code guidelines, and that these “mandate” the use of genderless pronouns on request, Brown said.

“Mandating use of pronouns requires one to use words that are not their own that imply a belief in or agreement with a certain theory on gender,” he added.

“If you try to disavow that theory, you can be brought before the Human Rights Commission for misgendering or potentially find yourself guilty of a hate crime. To sum up, on the subject of gender, we’re going to have government-mandated speech.”

Those who refuse to go along could be “brought before the federal tribunal,” Brown said.

If the tribunal assess a penalty such as a fine or “non-monetary remedy, such as a cease and desist order or an order to compel them to do something,” and the person refuses, “they will find themselves in contempt of court and prison is the likely outcome of that process until they purge the contempt.”

But even “more dangerous” than the “compelled speech issue” is that Bill C-16 enshrines gender theory in law, Peterson told the committee.

The evidence is “overwhelming” that “biological factors play a role in determining gender identity,” and to insist they do not is “patently absurd.”

“The idea that identity is something you define purely subjectively is an idea without status as far as I’m concerned,” Peterson said.

“Your identity is something you actually have to act out in the world as a set of procedural tools, which most people learn — and I’m being technical about this — between the ages of 2 and 4. It’s a fundamental human reality.”

Moreover, if gender identity is “changing and contextual” then “why is conversion therapy a problem?” Peterson noted.

“This is part of the problem with the policies, is they’re so incoherent that they will work against the people that they’re designed to protect.”

The arguments behind gender theory are not scientific nor factual but “ideologically driven,” he said.

“It’s a tenet of the ideology that identity is socially constructed, and that’s partly why it’s been instantiated into law,” contended Peterson.

“Because there’s no way they can win the argument but they can certainly win the propaganda war, especially by foisting this reprehensible advertising information on children. That’s part of the expressed intent.”

Indeed, although it has no place there, gender ideology is being taught in schools, Peterson said, showing as an example the “Gender Unicorn” cartoon, which he described as “particularly reprehensible, aimed obviously as it is at children somewhere around the age of seven.”

Peterson said when he looked into the policies around Bill C-16 they “made my hair stand up on end.”

He said what’s happening around Bill C-16 is an extension of the “ideological war” that’s been “ripping” campus apart. He described as a battle between modernism and an “ideological variant that is rooted in what is known as post-modernism, with a neo-Marxist base.”

The legislation will harm those it claims to help, he said.

“I believe this is a vanguard issue in a kind of ideological war, and that I’m not going to participate on the side of the people whose ideological stance I find unforgivable and reprehensible, especially the Marxist element of it.”