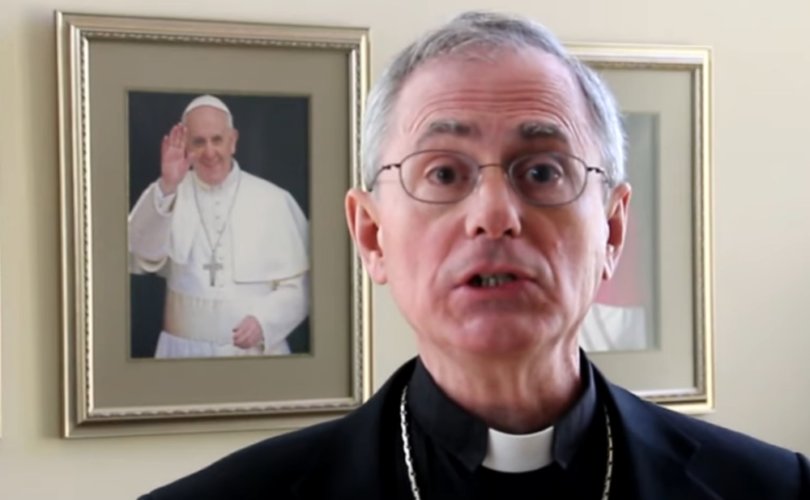 LONDON, Ontario, April 23, 2021 (LifeSiteNews) — Following the recently announced lockdowns in the province of Ontario, Bishop Ronald Fabbro has once again decided to impose a near-complete ban on baptisms and confessions, with exceptions only being granted in “danger of death,” and if a priest decides that there is “a serious need.”

Bishop Fabbro, of the Diocese of London, made the announcement in a press release issued April 17, curtailing nearly the entire public life of the Church in his diocese.

“Baptisms should be discouraged until the lock-down ends, but may be celebrated in danger of death,” he wrote.

A similar restriction was placed by the bishop upon the sacrament of confession, although with somewhat of a greater concession as to when the sacrament could be administered: “Confessions should be discouraged until the lock-down ends, but may be celebrated if the pastor determines a serious need; to be determined on a case-by-case basis; to be celebrated only by appointment.”

There was no guidance as to how a priest would determine whether a “serious need” existed.

The ban on the sacraments comes as the diocese aims to conform to the latest severe restrictions announced by Ontario Premier Doug Ford last Friday. Due to what Ford described as the “strictest measures in all of North America,” a new 10-person limit was imposed upon churches and places of worship.

Meanwhile, big box retail stores will also be reduced in capacity, but not to the extent seen in churches, as they are allowed to operate at 25 percent capacity.

Due to the extreme curtailing on numbers permitted inside the church buildings, Fabbro also moved to cease public Masses, saying that they would instead be “live-streamed or recorded and up-loaded.” This measure he justified by explaining that it ensured the diocese remained “in keeping with the directive of the provincial government and our previous practice.”

Furthermore, he stipulated that “celebrations of First Communion are deferred until the lock-down ends,” as were confirmations, although they could be celebrated “in danger of death.”

Two religious services still offered to the faithful, without any additional restrictions from the diocese, are marriages and funerals, both of which are permitted to take place with the civil restrictions of ten people.

With this sweeping move, cutting the vast majority of the faithful off from the reception of the sacraments, Bishop Fabbro appears to be in violation of the canon law of the Catholic Church. Canon 213 states, “The Christian faithful have the right to receive assistance from the sacred pastors out of the spiritual goods of the Church, especially the word of God and the sacraments.”

It is not the first time since the arrival of the coronavirus that Bishop Fabbro has infringed upon the rights of the Catholic faithful. Back in March 2020, he banned Mass, including funerals, and baptisms.

Confessions were also banned, although permitted “in cases of danger of death.” A later directive reaffirmed this ban, adding that “‘Drive-thru’ confessionals are simply not acceptable,” due to the potential to cause people to gather.

Instead of receiving sacramental absolution, Fabbro urged people to make an act of contrition, and then “experience God’s loving forgiveness.”

Later that same year, Bishop Fabbro issued an ultimatum to any priests in his diocese who did not obey his stringent COVID-19 rules for churches. Clergy who did not ban non-masked people from entering a church or did not force the faithful to receive Holy Communion on their “bare hand,” could face “prosecution,” and even the closure of their churches, warned Fabbro.

The bishop admitted at the time that his dictates went “beyond the requirements in most health unit orders and local by-laws.”

Indeed, his decrees even went beyond his power as bishop: Dr. Peter Kwasniewski, a Thomistic theologian and liturgical scholar, previously told LifeSiteNews in July that bishops who ban Holy Communion on the tongue are abusing their authority.

“Many bishops are abusing their authority right now because … they’re supposed to uphold Canon Law, and Canon Law is really clear that the faithful have the right to receive communion on the tongue. That’s it,” he said.

In fact, retired Polish Archbishop Jan Pawel Lenga last March warned bishops and priests who insist on giving Communion in the hand that their actions put them in danger of “hell.”

While Bishop Fabbro is enacting his most recent restrictions on the spiritual life of the faithful in response to the restrictions imposed by Premier Ford, some of his brother clergy strongly disagree with such a stance.

In an open letter published in May, Catholic clergy — led by former papal nuncio Archbishop Carlo Maria Viganò and Cardinals Gerhard Ludwig Müller, Joseph Zen, and Janis Pujats — reminded politicians around the world that “the state has no right to interfere, for any reason whatsoever, in the sovereignty of the church.”

Archbishop Viganò also mentioned in a talk at the Catholic Identity Conference that “obedience ceases to be a virtue and, in fact, becomes servility if it is an end in itself and if it contradicts the purpose to which it is ordained, namely Faith and Morals.”

These words of Archbishop Viganò are supported by the testimony of Canon Law, since Canon 212 §3 instructs the faithful that “they have the right and even at times the duty to manifest to the sacred pastors their opinion on matters which pertain to the good of the Church and to make their opinion known to the rest of the Christian faithful.”

LifeSiteNews contacted the Diocese of London for comment regarding the prohibitions and restrictions on the various sacraments, but did not receive a response at the time of publishing.

The entirety of Ontario, where the diocese is located, recorded roughly 437,000 cases of positive COVID tests, with 7,863 deaths. More than 14,5 million people live in Ontario, meaning that only .05 percent of the population died with a positive COVID test in the course of about 13 months.