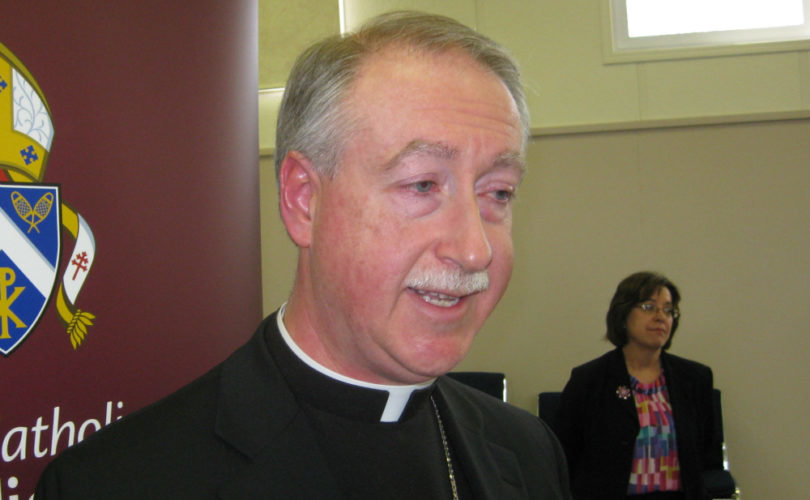 EDMONTON, Alberta, May 8, 2017 (LifeSiteNews) – Canada’s bishops have been dealing with allegations for “quite some time” that their foreign aid agency Development and Peace (D&P) supports abortion, Edmonton Archbishop Richard Smith recently told a Catholic women’s group.

“But when these sort of allegations come out, clearly the Conference of Bishops is not going to ignore them,” he said.

Smith was responding to a question from the Edmonton diocesan’s Catholic Women’s League which held a convention on April 22. One member had asked about the Canadian Conference of Catholic Bishops’ (CCCB) response to allegations that D&P partners with pro-abortion groups.

The question may have been fueled by a series of four investigative reports on D&P published on LifeSiteNews beginning March 28 that show the bishops’ charitable arm partnering with pro-abortion groups in poor countries. See list of recent reports here.

Smith said that a “special standing committee of bishops was established to liaise with Development and Peace so that should these allegations ever come up, we have a place where they can be instantly addressed.”

“Let me just say this,” stated Smith. “If Development and Peace were in any way supportive of abortion, does anybody think that the Bishops of Canada would support the organization for any more than 10 seconds? Of course not.”

LifeSiteNews contacted the Archbishop and asked what was being done to address LifeSiteNews’ recent findings that D&P does partner with a number of groups who do support abortion.

The Archbishop’s Communications Officer, Lorraine Turchansky, responded that “out of respect for this process, Archbishop Smith will not be commenting at this time.”

When LifeSiteNews asked if the statement could be interpreted to mean that a process had, in fact, been begun, Turchansky suggested that LifeSiteNews contact the CCCB or D&P for comment.

LifeSiteNews contacted René Laprise, CCCB’s director of media relationships, and asked if the bishops’ Standing Committee for Development and Peace has examined the allegations made by LifeSiteNews that D&P is currently partnering with pro-abortion groups.

He responded that he did not know if the committee’s agenda from its most recent meeting included addressing the LifeSiteNews allegations. He said he would look into the matter and report back.

“I can do some research and can get back to you if there is anything to report,” he said.

In its May 2 investigative report on D&P, LifeSiteNews found that seven out of ten Latin American grantees listed on the charity’s website are linked to pro-abortion activism.

The most recent investigative reports on D&P come eight years after LifeSiteNews began reporting on the charity funding over two dozen groups in the developing world that advocate for legal abortion, as well as contraception and homosexual “rights.” The Canadian bishops began a reform in 2010, when it established its D&P Standing Committee.