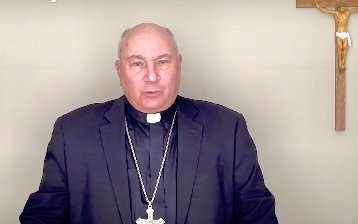 GRAND FALLS, Newfoundland (LifeSiteNews) – Bishop Anthony Daniels of the Diocese of Grand Falls, Newfoundland held a series of listening sessions with parishioners from his diocese where members of his flock called for massive changes to the Catholic Church, including an embracing of same-sex “marriage.”

The diocese released a video called “Invitation to Synod 2021-2023” that was released May 1.

Bishop Daniels, who banned Catholics from the sacraments for months if they did not take an abortion-tainted COVID jab, had his pastors play the video during Mass on Sunday, May 1 in lieu of the homily.

Various laypeople participated in the event and told Bishop Daniels – who chose to wear street clothes rather than his episcopal garb – what they thought about the Church and what direction the Church should go.

The bishop opened the talks by saying that all Catholics, even those who are “unhappy” needed to be listened to, along with “non-Catholics” and “people who have rejected the faith.”

Referring to same sex “marriage,” a woman named Joann said, “So, until Rome, the larger Rome, says that … Jesus is love, love is love, and we love you.”

Piggybacking off those comments another woman named Jessica said regarding homosexual unions, “We would just hope that the religion can see that and value that as well.”

One woman name Susan said that “there is a kind of evolution” in the Church, and that people can now say “what you’ve kept cloistered for all of that time.”

She added that in the past “you weren’t encouraged to do any analysis, to do any thinking.”

Bishop Daniels seems to have missed an opportunity to remind her that for centuries the Catholic Church has provided education for young people wherein the bedrock of the curriculum was classical philosophy with a heavy emphasis on logical reasoning.

Sheila added that the goal of changes in the Church should be for people to leave and say “I feel good, this is special to me.”

Another laywoman named Mary advocated for “meaningful change” in the Church, because in her opinion, there are still “factions within the Church that want to hold back the change that needs to happen” to keep young people in the Church.

While it is true that many young Catholics are not attending Mass overall, Mass attendance is at almost 100 percent among Catholics between 18 and 29 years old who attend the Traditional Mass. This suggests that young people are craving traditional Catholic norms rather than changes to the faith.

A parishioner from the Diocese of Grand Falls who chose to remain anonymous reached out to LifeSiteNews via email and said that “it was extremely hard to watch and endure” the video during Mass.

He called the assertions made about the Church in the video, “shameful” and “disgusting” and “vague.”

He also pointed out the irony that Bishop Daniels banned vaccine-free Catholics from Mass for months but is now holdings listening sessions that are supposedly for all Catholics in the diocese.

“I contacted him on the matter” of vaccine segregation from Mass, “and received no response.”