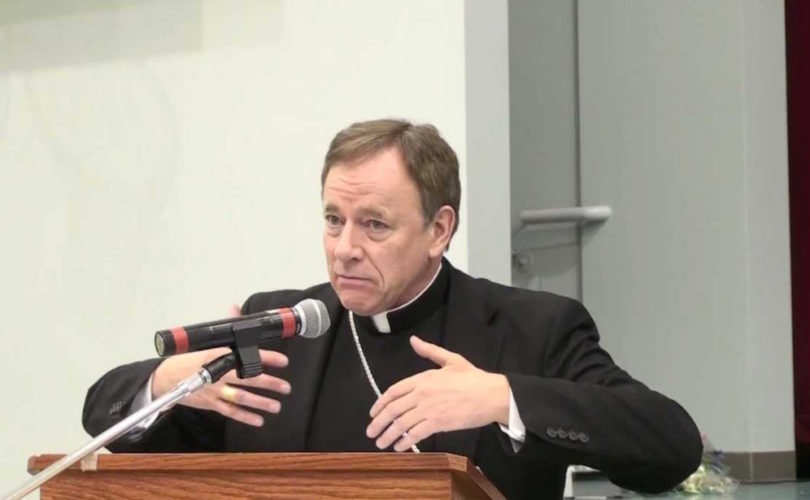 “To borrow from the words of Pope Francis, the report’s recommendations are the approach of a ‘throw-away’ society. They do not reveal the face of God’s mercy,” stated Hamilton’s Bishop Douglas Crosby, president of the Canadian Conference of Catholic Bishops (CCCB), in a strongly worded response released Friday.

“Killing the mentally and physically ill, whether young or aged, is contrary to caring for and loving one’s brother and sister.”

“This is not a matter of ‘medical assistance in dying’,” wrote the Alberta bishops. “What is at issue here is state-sponsored killing of the innocent. Killing is not medicine. This has no place in a just and ethical society.”

“Canadians, especially those dying or suffering from illness, deserve better,” stated Archbishop Miller. “It’s alarming how easily suicide is being offered and respect for life eroded.”

The special committee of five senators and 11 MPs was tasked with providing the federal government a legislative framework for assisted suicide and euthanasia after the Supreme Court struck down the current law in February 2015 as unconstitutional, a ruling that takes effect on June 6.

After hearing from 61 witnesses and receiving over 100 written briefs, the committee tabled 21 recommendations February 25.

Justice Minister Jody Wilson-Raybould stated cabinet would be discussing the recommendations, but that it will “take a little bit of time” to ensure “balance in our approach that recognizes the autonomy of individuals, that recognizes the need to protect the vulnerable, that respects the conscience rights of medical practitioners,” reported the Ottawa Citizen.

And the Canadian and Alberta bishops and Vancouver’s Archbishop Miller were unanimous in excoriating the committee’s recommendations 10 and 11, which effectively deny the conscience rights of health care professionals and institutions opposed to killing patients by medical means.

Recommendation 10 states: “At a minimum, the objecting practitioner must provide an effective referral for the patient.”

An “effective” referral, as the College of Physicians and Surgeons of Ontario defined and mandated in its January 2015 policy directive, is a referral to another physician who is willing to kill the patient.

Or, as Alex Schadenberg, executive director of the Euthanasia Prevention Coalition states, “It’s a referral for the purpose of death.”

But a “physician who conscientiously objects to these practices must not be coerced into referring a patient to another professional for assisted suicide or to be euthanized,” noted the Alberta bishops.

“This would, in fact, be complicity and thus a violation of the person’s right to freedom of conscience.”

Medical professionals must be “protected from intimidation and discrimination,” added the Alberta bishops, who include Archbishop Richard Smith and Auxiliary Bishop Greg Bittman of Edmonton; Archbishop David Motiuk of the Ukrainian Eparchy of Edmonton; Bishop Fred Henry of Calgary; Bishop Gerard Pettipas of Grouard-McLennan; and Archbishop Paul Terrio of St. Paul.

“Where is the plan for protecting the Charter rights of Canadians who don’t want to participate in causing patients to die?” asked Vancouver’s Miller.

“Many health-care workers believe strongly in saving lives and ending suffering — but not in ending lives. Canadians from many ethical traditions just won’t be able to go along with this,” he stated.

“No one can ethically be forced to take part in causing their patient to die,” he added. “New laws need to ensure their Charter rights are protected as well.”

“This is unacceptable at Catholic hospitals, which are committed to the compassionate care of patients to the natural end of life,” wrote the Alberta bishops.

“Canadians have a right to be served by doctors and institutions that practice only medicine and are not involved in state-sponsored killing,” they stated. “They must not be deprived of access to such just because there are other citizens who desire assistance in committing suicide.”

The CCCB’s Crosby stated that the report “fails to show how palliative care and home care can provide true options for those tempted by suicide, nor does it call for a national plan to prevent suicides.”

Suicide rates “are five to seven times higher for First Nations youth in Canada than for non-Aboriginal youth” and are “among the highest in the world, at 11 times” the national average among Canada’s Inuit young people, he added.

The “dignity of the human person and the flourishing of the human community” demand two things, Crosby wrote.

Firstly, the “protection and respect for each human life from conception to natural death,” and secondly, the “freedom of conscience and religion for each person as well as each institution.”

The Canadian, Alberta, and Vancouver Catholic bishops’ statements add to a rising tide of protest against the federal committee’s report.

Four Conservative MPs who sat on the committee stated in a dissenting opinion that the recommendations violate rights of health care workers and fail to protect vulnerable Canadians.

One of the four, Alberta MP Michael Cooper, told the Ottawa Citizen that the report is “very radical” and “dangerous.”

Saskatchewan Conservative MP Brad Trost also denounced the report, calling its recommendations the “most extreme in the world.”