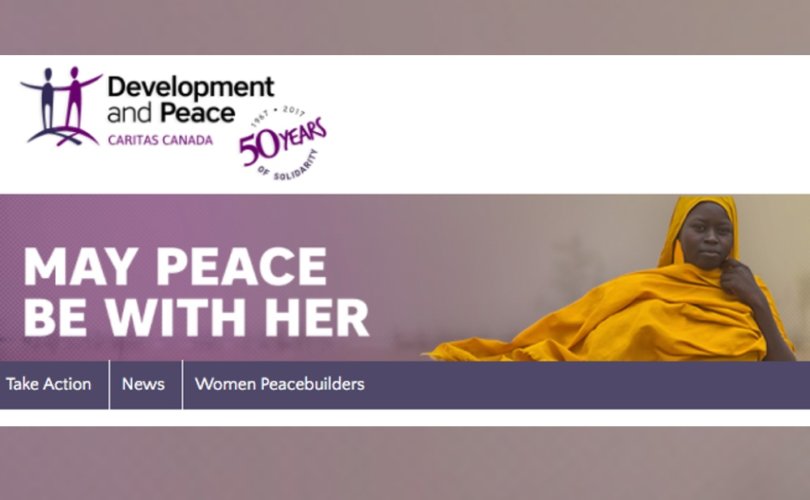 D&P's petition asks the government to dedicate “0.7% of the gross national income to development assistance” that furthers the “Canadian International Assistance Policy announced in June 2017.”

The “Feminist International Assistance Policy,” announced last June, criticized “discriminatory” laws and policies that limit the sexual and reproductive health and “rights” of women and girls. Such laws and policies effect “a lack of comprehensive sexuality education and family planning services [and] restricted access to contraception and safe abortion,” the policy stated.

“Across the globe, 225 million women do not have access to the contraception methods of their choice,” said Minister of International Development Marie-Claude Bibeau during a press conference about the policy. “Every year more than 22 million women and teenaged girls undergo unsafe abortions and every nine minutes one of them dies because of it,” she added.

Just days before the release of the policy, Foreign Minister Chrystia Freeland stressed that the “right to access safe and legal abortions…are at the core of our foreign policy.”

Earlier this year, D&P published on its website praise for the pro-abortion policy while berating its lack of funding.

Trudeau’s feminist policy “follows the choice that many Canadian organizations had already made to put women front and centre in their development work,” wrote D&P researcher and advocacy officer Elana Wright.

She praised Trudeau for his “ambitious feminist vision.”

The policy focusses [sic] on core gender equality work, including preventing and responding to sexual and gender-based violence and supporting local women’s rights organizations and movements, with special funding dedicated to front-line grassroots women’s organizations. A key area of focus of the feminist policy is inclusive peace and security, which includes supporting women’s rights organizations’ engagement in peace processes; advancing women’s rights in post-conflict state building; and addressing sexual violence in conflict zones. The policy does not forget about the roles that boys and men can play in challenging gender stereotypes and changing gender roles and relations.

Wright failed to mention the policy’s explicit support for abortion.

Wright’s praise of Trudeau also failed to mention the Liberals’ doling out $650 million over three years to pro-abortion groups to provide and promote abortion and campaign for its legalization it in developing nations.

Gwen Landolt, vice president of REAL Women, finds this uncritical view of the Liberals’ pro-abortion policy “shocking” and “serious.” It reveals that D&P is “totally in support” of Trudeau’s pro-abortion foreign policy, she said.

“There’s nothing Catholic about it,” she said. “What person sitting in the pew will have confidence in Development and Peace?”

Wright and D&P spokesperson Kelly DiDomenico did not respond to a request for comment from LifeSiteNews, nor did the Canadian Conference of Catholic Bishops.

The bishop’s charitable arm has refused to publish a full list of its partners since a scandal broke in 2009 over its funding of dozens of international groups promoting abortion, contraception, and other evils contrary to Catholic teaching and to the dignity of the human person. Instead, D&P profiles select partners on its website, many of them problematic. When LifeSiteNews sought the full list of partners in 2010 through an access to information request with the Canadian government, D&P went to federal court to block it.

D&P’s special Lent drive is now taking place in parishes across Canada. Its refusal, however, to release a full list of partners makes public accountability impossible. Without transparency, Catholics have no way of knowing whether or not their donations to D&P might end up being funneled to partners engaging in activities contrary to Catholic teaching.

Meanwhile, government funding of D&P doubled from 2013 to 2016, according to Canada’s registry of charitable groups.