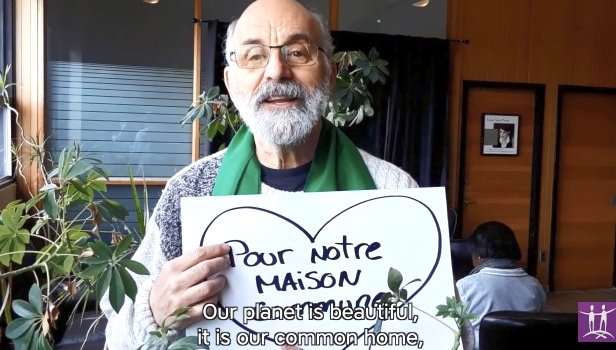 MONTREAL, November 20, 2019 (LifeSiteNews) — The Canadian bishops’ international charitable arm recently released a video highlighting the “importance of nature and its protection” in which it is claimed that “Jesus came to save the planet” and that “Mother Earth has rights.”

Development and Peace (D&P) — currently under investigation for partnering with dozens of pro-abortion and pro-homosexual groups in developing countries — released the video on October 1, just days prior to the opening of the Amazon Synod in Rome where the pagan idol “Pachamama” was worshiped in the Vatican Gardens at an event attended by Pope Francis.

Titled “Speaking up For our Common Home – Intergenerational,” the video showcases various people who lament how the world is affected by “climate change.”

In one section of the video, popular author Fr. Ron Rolheiser, OMI, asserts that “Jesus came not just to save people, Jesus came to save the planet, and Mother Earth itself has rights.”

At another point, a woman digs her hands into the earth and calls it “sacred.”

The video includes a call for Catholics to “learn” from indigenous peoples who need to “teach us” how to “keep this earth a beautiful place.”

However, the message of the video “leans in the direction of pantheism” and is “misleading at best,” according to one theologian.

“If the claim that Jesus ‘came to save the planet’ as well as people’s souls is understood in the sense of St. Paul’s teaching in Romans 8:19-23, there’s nothing wrong with it,” said Father Brian Harrison, a priest of the Society of the Oblates of Wisdom, and retired associate professor of theology of the Pontifical Catholic University of Puerto Rico.

“The Apostle says there that Christ’s redeeming work will eventually restore the whole fallen and sin-stricken universe, that has been ‘groaning’ under a curse since Adam’s Fall. Both Old and New Testaments also speak of a ‘New Heaven and a New Earth’ that is to come,” he told LifeSiteNews in an email.

“However, to say ‘Mother Earth itself has rights’ is not true, except perhaps understood as a loose figure of speech. It’s at best misleading,” Harrison added.

“For only persons can have rights, and to personify the earth as a real ‘Mother’ with ‘rights’ would lean in the direction of pantheism.”

Father Harrison pointed out that man has a responsibility toward the earth that derives from his duty to God.

“It is true that we human beings have a duty to God — not to the Earth itself! — to avoid unnecessary harm and contamination to the earth and its resources. That’s part of the stewardship over the earth that God gave us in Genesis 1,” he told LifeSiteNews.

Christian concern for the environment, he added, “must not become exaggerated or tainted with pantheism, or politicized for purposes of globalist politics.”

That’s echoed by Michael Hichborn of the Lepanto Institute, which recently petitioned the U.S. bishops to withdraw support for the Catholic Campaign for Human Development (CCHD), the U.S. counterpart of D&P,  for “persistent funding of organizations that promote abortion, contraception, homosexuality, and Marxism.”

He rejected the notion of Mother Earth, observing that in the D&P video, “someone actually says that they are part of the earth, and the earth is a part of them, and that it is ‘their mother.’”

“Our Mother is the Mother of God, Blessed Mary Ever Virgin! The entire concept of a ‘mother earth,’ which is perpetually pregnant and never delivering the child in the womb, is the very image of a fruitless faith,” Hichborn said.

But “the more insidious and dangerous aspect of this video is its participation in the global environmentalist movement,” he told LifeSiteNews.

Leonardo Boff, the laicized priest and theologian of reference for the Amazon Synod, said in 1980 the global environmental movement “would be used to promote the revolutionary process,” and Boff said of Marxist liberation theology, “To the cry of the poor we added the cry of the earth,” Hichborn pointed out.

Brazilian Dominican Frei Betto, who spoke of “the opportunity to use the (Amazon) synod to promote liberation theology” also warned that the phrase ‘liberation theology’ sets people on edge, so instead, he proposed talking ‘about socio-environmental issues,’” he added.

“While it is true that we all have a duty to be good stewards, the devil’s ploy is to twist the truth without denying it. Certainly, we can find better ways to handle refuse and toxic chemicals, but the agenda of these socialist environmentalists goes well beyond that,” Hichborn said.

“The fundamental goal of the socialist-environmentalist agenda is depopulation through abortion, contraception, and even homosexuality.”

The Catechism of the Catholic Church teaches that “God willed creation as a gift addressed to man, an inheritance destined for and entrusted to him” (154), and that “we are to take good care of God's gift to us,” noted Steve Mosher, president and founder of Population Research Institute.

However, “to suggest that creation is somehow equivalent to the creature — us — that it was created for, is to misstate its purpose and exaggerate its importance,” he said.

“Yet that is what the video does in saying that ‘Jesus came not just to save people, Jesus came to save the planet. And Mother Earth itself has rights,’” he told LifeSiteNews.

“We are a fallen race who have sinned before God and require salvation. Inert matter, nerveless plants, and even soulless animals are incapable of sin and therefore do not require salvation,” Mosher added.

“God did not send his only Son to die on a cross for endangered species, or to combat global warming, but to save fallen mankind. Period.”

Meanwhile, Pope Francis said last week that he’s thinking of adding “ecological sin” to the Catechism, and he quoted the Amazon Synod final document, in which the bishops proposed to define “ecological sin as an act or omission against God, against neighbor, the community, and the environment, ” LifeSiteNews reported.

As for the review of the Canadian bishops’ review of Development and Peace partnering with 52 groups overseas that promoted abortion or homosexuality, its findings have not yet been published.