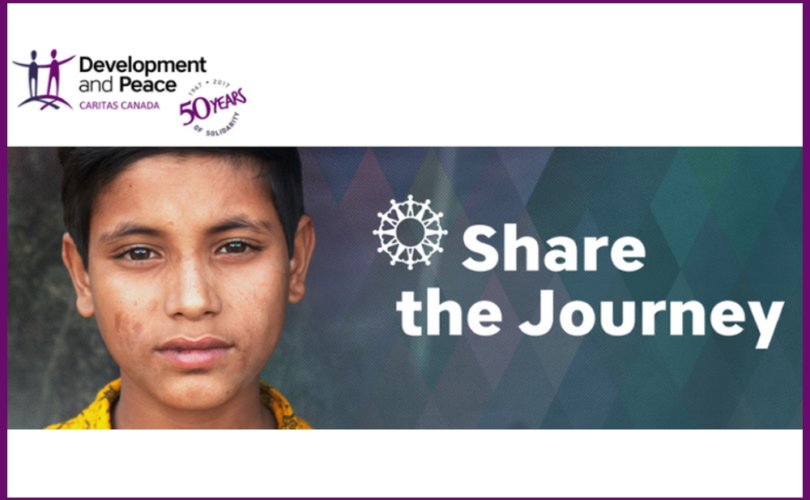 OTTAWA, Canada, November 22, 2018 (LifeSiteNews) – The Canadian Council of Catholic Bishops will continue to investigate the partners of Development and Peace (D&P), the Catholic aid agency it oversees, despite assurances from the charity that it has dropped 52 problematic partners.

According to Montréal’s Présence: Information Religieuse website, the Canadian Catholic Organization for Development and Peace has announced that it is temporarily suspending funding to 52 of its partners after it was determined through an internal investigation that they did not adhere to the “values and teachings of the Catholic Church.” Donations made to the 2018 Share Lent campaign will not, therefore, be going to these organizations.

These groups represent a quarter of D&P’s 180 partners.

D&P’s decision follows the Canadian Bishops’ investigation into their charity after it was revealed that it partnered with at least 40 groups in developing countries that were pro-abortion or pro-homosexuality.

Since April 2018, 12 Canadian dioceses have been holding back contributions earmarked for D&P because of the “actions and statements” of some of the charity’s partners in the Global South that raised “certain questions concerning their respect for the teachings of the Church.”

According to Présence, on November 19, the Toronto and Edmonton archdioceses confirmed that they were still withholding these donations.

Présence says that it has obtained a copy of a three page letter, dated November 16, written by D&P’s executive director, Serge Langlois, in which he informs all heads of the charity’s diocesan councils, that “Development and Peace financially supports only projects that adhere to the values and teachings of the Catholic Church.”

“At the end of 2017, at the request of the Canadian Conference of Catholic Bishops (CCCB), Development and Peace began a review of its 180 partners from Africa, Asia, Latin America, and the Middle East, to ensure that they respected the values and social teaching of the Church, such as the sanctity of human life and the dignity of the person,” Langlois continued.

The scrutiny of the partners was made “in collaboration with the CCCB, thanks to the ad hoc committee specifically convened for this purpose,” the Director General added.

By the time the review was finished to the CCCB’s satisfaction, they had found not just 40, but 52 partners who should not be receiving Catholics’ money.

“The CCCB representatives on this committee identified 52 partners who, according to data obtained online, posed some questions regarding their respect for the teachings of the Church,” Langlois wrote.

He mentioned also that Development and Peace had done previous investigations into their partners in April 2018 and September 2018, but they had not satisfied the bishops’ doubts.

“Unfortunately, it seems that we had interpreted differently the nature of the request,” Langlois said, “and after the recent Plenary Assembly of the bishops, they asked us to provide a supplementary analysis, particularly on the criteria that we use to choose our partners.”

Relations between Development and Peace and the bishops are strained, but Langlois is hopeful that their relationships will improve.

Since the September meeting of the bishops, the leaders of Development and Peace “have proposed different avenues and possible solutions to help us rebuild a climate of confidence with the bishops of Canada,” he wrote.

According to Présence, Langlois’ letter suggested that if the Bishops are still not satisfied, they might withhold their support from Development and Peace’s next campaign.

“Even though questions have been asked about the 2019 Lent Campaign, we are confident that a solution to this crisis will be found, thus allowing the Church to confirm her participation,” Langlois wrote.

Lisa Gall, Communications Coordinator for the Canadian Conference of Catholic Bishops, confirmed that the CCCB had received the same letter as the D&P directors.

“The review is ongoing,” she added.

LifeSiteNews has been extensively reporting for years on Development and Peace’s funding of pro-abortion, pro-contraception, and pro-LGBT groups in the developing world.

LifeSiteNews initially broke the news about Development and Peace’s funding scandals in 2009, when it reported the Catholic aid association was funding pro-abortion groups in Mexico.

Those revelations prompted the bishops to investigate, and that same year they released a report purporting to exonerate  Development and Peace of all wrongdoing. But in 2010, they acknowledged the ongoing scandal by establishing a standing committee to monitor Development and Peace’s activities and international partners.

Following LifeSiteNews' reporting in 2009, Development and Peace stopped publicly listing most of the groups it supports, and even went to court to prevent the list from being published.

The group still refuses to publish a complete list of its partners, thus making it impossible for outside third parties to investigate the truth of its claim that it “financially supports only projects that adhere to the values and teachings of the Catholic Church.”

Since then, D&P has provided LifeSiteNews with many more stories about Canadian Catholics’ cash going to problematic causes. For example, it reported last March that D&P had been funding at least seven Latin American organizations that actively promote the legalization of abortion, including one in Haiti.

Dioceses across Canada donate to Development and Peace through the annual Share Lent campaign, or ShareLife in Toronto every Lent.