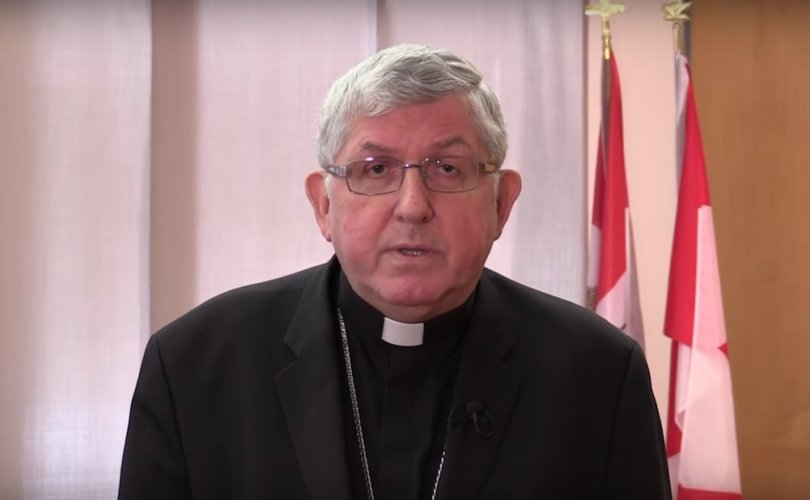 OTTAWA, April 15, 2016 (LifeSiteNews) — Canada’s Catholic bishops have denounced the Liberal bill legalizing euthanasia and assisted suicide as “an affront to human dignity, an erosion of human solidarity, and a danger to all vulnerable persons.”

“Suicide and euthanasia are contrary to the most profound natural inclination of each human being to live and preserve life.”

The Liberals’ long-awaited draft legislation introduced April 14 is intended to amend the two Criminal Code sections prohibiting assisted suicide and euthanasia that were struck down by the Supreme Court’s February 2015 Carter decision as unconstitutional. That court decision takes effect June 6, 2016.

But the proposed legislation, “no matter how it will be amended” is a “danger to all vulnerable persons — particularly the aged, disabled, infirm and sick who so often find themselves isolated and marginalized,” stated the CCCB.

“Moreover, it is a violation of the sacrosanct duty of healthcare providers to heal, and the responsibility of legislators and citizens to assure and provide protection for all, especially those persons most at risk.”

The bishops urged provincial and the federal governments “to renew efforts to guarantee accessible home care and palliative care,” and to “protect the conscience rights of healthcare providers and agencies refusing to be part of euthanasia and assisted suicide.”

Other bishops echoing these concerns included Edmonton’s Archbishop Richard Smith, who warned in a statement Thursday that Bill C-14 “makes legally acceptable in some circumstances what is morally wrong in every circumstance: the taking of innocent human life.”

“It is deeply worrisome to see law thus separate itself from a fundamental moral norm,” Smith stated.

“At a time when our priority should be fostering a culture of love, and enhancing resources for those suffering and facing death, assisted suicide leads us down a dark path,” noted Toronto’s Cardinal Thomas Collins.

“At first sight it may seem an attractive option, a quick and merciful escape from the suffering that can be experienced in life,” Collins said, “but fuller reflection reveals its grim implications, not only for the individual but for our society, and especially for those who are most vulnerable.”

“I am struck by the bleak dissimilarity between this proposed legislation and the papal document Pope Francis released last week, in which he called assisted suicide and euthanasia ‘serious threats to families worldwide’,” noted Vancouver’s Archbishop J. Michael Miller, referring to the pope’s apostolic exhortation Amoris Laetitia.

Miller blasted the bill’s failure to “recognize the right of health care institutions to reject providing these measures to patients entrusted to their care.”

Catholic hospitals, “so long an integral part of Canada’s health care system, are left completely unprotected by this proposed law,” he stated.

And he echoed anti-euthanasia activists in excoriating the bill’s ambiguity “as to who qualifies for assisted suicide,” as “inexplicable” and “very dangerous.”

The Supreme Court’s Carter decision ruled that the law preventing competent adults who have a “grievous and irremediable medical condition that causes enduring and intolerable suffering” from seeking “physician-assisted dying” infringed their Charter Section 7 right to “life, liberty and security of persons.”

Bill C-14 restricts eligibility for assisted suicide and euthanasia to competent persons aged 18 and over who have an incurable serious illness or disability, are in an advanced state of irreversible decline, in intolerable suffering and whose “natural death is reasonably foreseeable.”

“The draft legislation appears to make assisted suicide available to anyone whose death is deemed ‘reasonably foreseeable’,” Miller stated.

“But whose death is not reasonably foreseeable? This level of ambiguity in a law that aims to regulate life and death is not only inexplicable, but also very dangerous.”

“What is already clear is that this legislative step introduces into law the chilling message that some lives are less worth living than others,” noted Edmonton’s Smith.

“In a truly just and ethical society, our communal response to those who suffer is not killing but compassion,” he said.

“In this respect I repeat the urgent call echoing throughout Canadian society for increased access to good quality palliative care.”

Collins also urged people to “continue to dialogue with their members of parliament” for “effective palliative care for all” and the protection of conscience rights for health care workers and “institutions, hospices and long-term care facilities whose mission, vision, and values commit them each day to heal, not to hasten death.”

“In a cold world of euthanasia, havens of hope are all the more needed,” he said. “We must especially offer love and compassionate assistance to those who are tempted to suicide.”

The cardinal told the Catholic Register he was concerned about the bill’s lack of protection for conscience rights for health care workers and institutions.

“If they’re going to do it, what we do ask is that they do not force or compel in any way either an individual or an institution to facilitate their wish against the conscience of the person or the institution.”

Collins appeared before the special joint parliamentary committee in February on behalf of the Coalition for HealthCare and Conscience.

Collins joined other bishops in blasting that report, which he said should “shock us to the core.”

The proposed federal bill contains no explicit protection of conscience rights. The Liberals are leaving it up to the provincial and territorial governments to decide to what extent medical practitioners and publicly funded institutions will be compelled to participate in or provide euthanasia and assisted suicide.