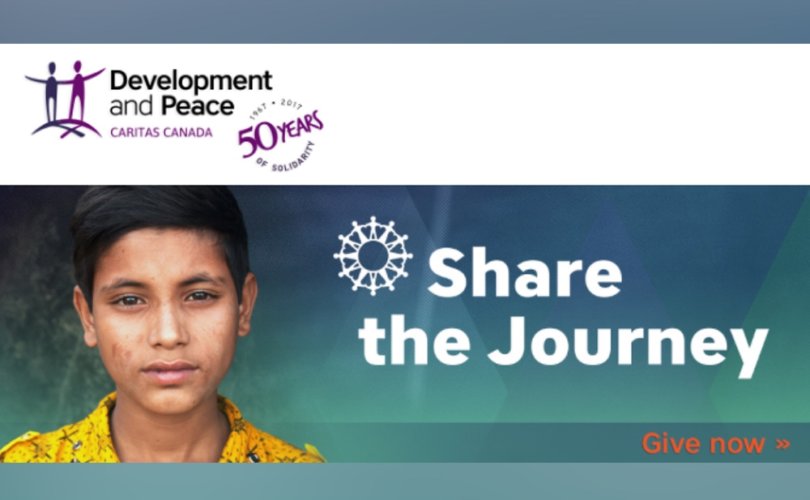 OTTAWA, April 3, 2019 (LifeSiteNews) – Canada’s Catholic bishops are asking the faithful to give to its scandal-plagued charitable arm Development and Peace (D&P) this Sunday despite admitting that an ongoing review revealed the charity has partnered with as many as 52 organizations in developing countries that don’t share the Church’s “social doctrine and moral teaching.”

While the bishops claim in their March 29 “update” that “no questions have been raised about any projects that CCODP [Canadian Catholic Organization for Development and Peace] is helping to fund”, LifeSiteNews investigations in 2017 uncovered that the charity had been funding at least seven Latin American organizations that actively promote the legalization of abortion, including one in Haiti.

LifeSiteNews has been reporting extensively for years on D&P’s funding of pro-abortion, pro-contraception, and pro-LGBT groups in the developing world, and broke the news in 2009 that the Catholic aid association was funding pro-abortion groups in Mexico, which prompted the bishops to investigate, and ultimately to establish a standing committee on D&P.

Since this time, D&P has refused to publish a complete list of who it funds, thus making transparency impossible.

The bishops’ latest investigation into D&P began in late 2017, with a February 2018 interim report revealing the charity partnered with at least 40 groups in developing countries that were pro-abortion or pro-homosexuality.

The March 29 joint update from the Canadian Conference of Catholic Bishops and D&P confirmed the review has identified 52 of the Catholic aid organization’s 183 partner organizations as problematic.

In 2018, Development and Peace implemented a funding moratorium “on all 52 partners until all questions regarding their suitability have been resolved,” according to the statement, which adds the moratorium will remain in place until the review is done.

“All funds collected for the 2019 Share Lent campaign, as also was the case last year, will be used to support other justice, solidarity and peace projects fully in keeping with the values and principles of the Gospel and Catholic Social Teaching,” it says.

The update gives no definite date for the review’s conclusion, only that it “will come to a close as soon as possible,” and that the sub-committee of the two organizations has met for “three full days” since January, with more meetings to come.

The outcome will be “a series of recommendations as to whether partnerships should be ended, continued, or continued subject to certain conditions,” which will then be submitted to both D&P’s national council and the “CCCB’s Permanent Council and eventually all the Bishops of Canada” for deliberation.

Dioceses across Canada donate to Development and Peace through the annual Share Lent campaign, or ShareLife in Toronto, and the update urges Catholic to be generous.

“Share Lent is the biggest fundraiser of the year for CCODP and is vital for long-term community development projects to support those in need in the Global South and for education work in parishes across Canada,” the March statement says.

A dozen bishops announced last year they were holding back the Share Lent 2018 contributions based on the February 2018 interim report.

By October, 10 of the 12 had “quietly” released the funding, according to Catholic Register, with two holdouts, Archbishop Richard Smith of Edmonton and Cardinal Collins of Toronto, following suit two months later.

Collins informed parishes in December that ShareLife was releasing its 2018 collection of $800,000 to Development and Peace according to protocols established in 2009, in which Toronto archdiocese requires “a letter of endorsement from the local Catholic bishop or bishops’ conference, affirming that the project and partners are in harmony with our faith.”

Toronto’s 2019 contribution to Development and Peace to “will be determined upon completion of the ongoing review being carried out by the Canadian Conference of Catholic Bishops,” Collins said then.

He also referred to a November 26 statement released jointly by CCCB and D&P that explained the bishops decided in their fall plenary the review’s “findings would not be made public until the examination is complete.”

“It is regrettable that unauthorized and incomplete data was released in a recent media report without the consent of either the CCCB or the CCODP,” the statement said.

Earlier in November, LifeSiteNews reported that Montreal’s Présence: Information Religieuse website had obtained a November 16 letter Development and Peace executive director Serge Langlois sent to all heads of the charity’s diocesan councils and the CCCB that suggested a strained relationship between the bishops and their international aid organization.

He also mentioned Development and Peace had done previous investigations into their partners in April 2018 and September 2018, but the bishops still had concerns.

“Unfortunately, it seems that we had interpreted differently the nature of the request,” Langlois said, “and after the recent Plenary Assembly of the bishops, they asked us to provide a supplementary analysis, particularly on the criteria that we use to choose our partners.”

According to a December statement on Edmonton’s archdiocesan website, the Alberta bishops received a November 27 letter from Langlois telling them “of the steps being taken to address the specific issue of the partners identified as problematic.”

He advised the bishops that Development and Peace “are revising partner selection criteria, adjusting their Partnership Policy and taking measures to improve communications with both the Bishops and all CCODP members. All of this is unfolding in collaboration with officials of the CCCB.”

“On the basis of the information provided and CCODP's guarantee that the funds collected in 2018 will not be forwarded to partners under review, the Bishops of Alberta have decided to release those same funds to CCODP by the end of this year,” their statement said.

“We have requested that they give a full accounting to us of the way in which these 2018 funds are eventually distributed,” they stated.