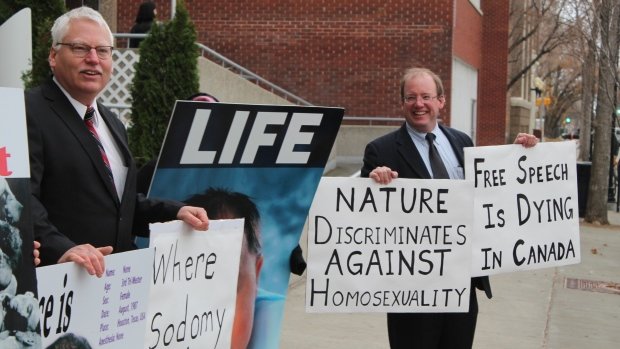 American anti-homosexuality crusader Peter LaBarbera has just been notified personally of the decision by the CBSA, formerly Canada Customs, because his copy of the 2014, hour-long film was seized as he crossed the border this spring.

“It’s absurd for a democracy like Canada,” said LaBarbera, who is the founder and president of Americans for Truth About Homosexuality. “I don’t endorse everything in this film. But I hate to see a great nation like Canada suppressing debate in the name of political correctness. It weakens a nation, it debilitates it. In a free society people evaluate information themselves. They don’t give the responsibility to a bureaucrat.”

LifeSiteNews contacted Canada’s Border Services Agency for an explanation of the decision, but did not hear back by press time.

Dr. Charles McVety, the founder of Toronto’s Canada Christian College and a prominent Evangelical leader, called the ban on Sodom “outrageous.” He said it was part of a trend that included his being kicked off TV for calling Toronto’s Gay Pride Parade a “sex parade,” and Trinity Western University’s law school project being threatened because of its adherence to Christian teaching.

“We are reaching the stage where a person who holds to traditional Christian values will have no standing in Canada. Eventually we won’t be able to even get a job in this country.”

LaBarbera said he loves Canada—“We went there on our honeymoon”—but may not return after getting stopped for several hours on two recent visits. “It is getting wearying.” LaBarbera was detained for several hours by Canadian border officers in the Spring and subjected to an immigration hearing to determine if he could be refused entry for committing hate crimes.

Sodom is the work of a celebrated Russian journalist and TV personality, Arkady Mamontov. He is best known in the West for a 2012 documentary on the occupation and desecration of a Russian cathedral by Pussy Riot, a dubious band of anti-religious, pro-gay young people. Mamontov accused the U.S. State Department of orchestrating their event.

The same conspiratorial theme runs through Sodom, reinforced by a State Department directive revealed by Wikileaks urging all American diplomats to push for homosexual and transgendered rights worldwide.  The film alleges that the U.S. is promoting a “powerful wave” against traditional values with new footage of President Barack Obama making a congratulatory phone call to the first gay couple legally married in an unnamed U.S. state.

Interviews with worried conservatives are interspersed with obscene footage from Gay Pride parades, and interviews with homosexual parents asserting their superiority to heterosexual couples because they had to work so hard to conceive children artificially, whereas heterosexuals have children “accidentally.”

With a single example of an Australian gay couple jailed for prostituting their adopted son offered as evidence, the film hints that at best gays will raise children who are morally and psychologically confused, but at worst want them for pedophilia pursuits.

Extensively interviewed on Sodom is American Evangelical Scott Lively, who told LifeSiteNews he is “Public Enemy Number One” to the U.S. homosexual lobby. He lives up to the billing on film as he describes how the homosexual “five-step plan” is unfolding in the U.S., Canada, and the European Union.

First, homosexuals secure tolerance, then acceptance, then they demand they be celebrated, then the rest of society must participate (rainbow and crossdressing days and gay-straight alliances in schools), and finally dissenters are punished. To show that the final stage has arrived in the U.S., there is a lengthy segment about an American caterer, Baronella Stutzman, sued for refusing to work on a homosexual wedding.

A German Protestant, homosexual pastor is shown making the case that Jesus never mentioned homosexuality but did tell everyone to “love your neighbour as yourself,” which in his view trumped anything St. Paul or the Old Testament had to say on the subject. But a Russian Orthodox priest is then given the chance to rebut.

He and the film’s narrator contend that God’s will is clear from Scripture and from nature: sexual activity should be heterosexual. When whole societies abandon this, ruination follows. The film even suggests that resisting the homosexual onslaught will forestall the end of the world, based on Jesus identifying the end times, in Matthew 24:37-38, with the sexual immorality that presaged the Flood.

Scott Lively told LifeSiteNews the film speaks to the “sincere, powerful moral conservatism” he found when he toured Russia, successfully promoting the passage of the law that now bans homosexual propaganda. “I was stunned at how many people came forward after my talks to tell me, ‘This will never happen in Russia.’”

As for Canada, he is not surprised Sodom has been banned there. “Canada has always led the U.S.” in abandoning traditional moral and economic values, he said. Now Canada, the U.S., and the European Union are embracing socialism and homosexuality just as Russia is going in the other direction.

His comments were reinforced by Alexey Komov, head of the (Russian Orthodox) Patriarchs’ Commission on the Family and the Protection of Motherhood and Childhood in Moscow. “It [the ban] reminds me of Russia under the Soviet Union when some topics could never be brought up,” Komov told LifeSiteNews.

Komov, who helped the filmmaker distribute Sodom through pro-family and pro-life organizations world-wide, added, “Now Canada is practicing a softer form of that, where the people are not given the political freedom to decide for themselves how to protect their children. They don’t have the freedom to decide what information they can look at. Now the schools can indoctrinate their children about homosexuality using sex education.”

Komov said the filmmaker’s plan “was to make a shocking movie which gets all the facts about sodomy-homosexuality together in one convenient form, its history, its consequences for society and for health, to alarm the public about what is really happening behind the pure-sounding term human rights.”

The film has been shown in 18 different languages and, as far as Komov knows, Canada is the only country that has banned it.