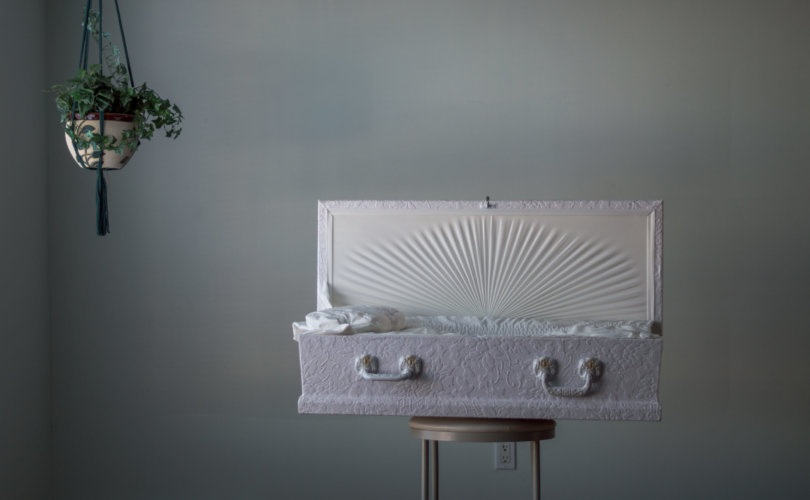 (LifeSiteNews) – A Canadian casket maker sounded an alarm over what he says is a significantly higher than usual amount of child coffin sales, which he has linked to the COVID jabs.

In a recent episode of the Stew Peters show, Toronto area casket salesman Mick, who asked only his first name be used, revealed that child-size coffin sales have gone through the roof.

Mick noted that the “smaller-size orders have never been so popular.”

“I would like to mention that all casket sales are up dramatically in the last two years, call it what you will, magic or the vaccine, but something has happened that is causing unprecedented amount of deaths,” Mick said.

Peters said to Mick that the jabs “are an intentional plot” to kill millions.

Mick said that they have sold five years’ worth of stock in “seven months.”

“Those are the numbers people don’t want to hear. It’s gross,” he said.

Mick noted that in the funeral industry it is not “looked upon” to talk about the dead, so many kept their mouths shut.

Mick works for a company that has been making coffins since the mid-1980s and today is in the wholesale casket business, selling to big retailers such as Costco.

According to Mick, the firm he works for delivers about 80 percent to 90 percent of Canadian bulk order coffin demand.

LifeSiteNews reached out to Mick to ask him about casket sales. As of press time, there has been no reply.

According to a recent report in the Western Standard, Mick said he has never seen such a demand in bulk order sales of kid-sized coffins for those age 18 months to 10 years old.

Mick said that there is “no denying it” that the sales of caskets from before the COVID crisis to now are up “30%, maybe 40%.”

“And in this industry, for a 30% or 40% increase in sales, something dramatic has to have happened,” Mick noted.

According to Mick, in a normal year between 50 to 60 child coffins would be sold. However, just in the last eight months, sales have shot up to around 450 child-size caskets.

While coffins for small babies have stayed more or less the same, Mick says that “everything else has increased.”

He noted that this phenomenon is not specific to certain areas but is “throughout North America” and even in parts of Europe.

“North America seems to be experiencing it at a higher rate than everywhere else that that we deal with specifically.”

The alarm was first sounded by the coffin salesman in April.

“My family owns a casket manufacturing plant. I’ve said this publicly many times; we make coffins. Yesterday my cousin received a request for a bulk order of under 5 foot caskets. Never has that ever happend in 37+ years. For you idiots, those are children-sized coffins,” Mick tweeted under the user name @highesthalfling.

Mick’s tweets are now protected for his followers only after earlier being open.

Recent data out of some provinces, most recently Alberta, show that deaths attributed to “ill-defined and unknown causes” in 2021 were double that of previous years.

Mick said the higher than normal death rates in Canada are showing through the rise in demand for caskets.

He noted that Costco is the company that has ordered the most child-sized caskets in the last few months.

“Costco is not in the habit of sitting on stock,” said Mick, adding that “their last few orders have been staggering in comparison to what they were ordering before.”

As reported in the Western Standard, Mick said that the rise in child coffin sales has “something to do with the vaccines.”

“I don’t want to say we’re a group of people who weren’t convinced (by the science), but you know, I think (a family member) got one dose, had a horrible reaction and then nobody else in his family got it. No one in my family has gotten it,” Mick noted.

Mick added that the jabs are “something serious” that are causing “young people to just immediately die.”

“I think there’s going to be … a steady increase in deaths just because of the trend of caskets getting ordered. Costco is not in the habit of sitting on stock,” he added.

Also, for a while now experts have been sounding the alarm over what can be described as a flood of COVID vaccine injury reports.

Countries such as Sweden and Denmark have stopped the use of the Moderna injection in young kids due to a notable rise in myocarditis and pericarditis linked to the jabs, which are potentially fatal heart conditions.