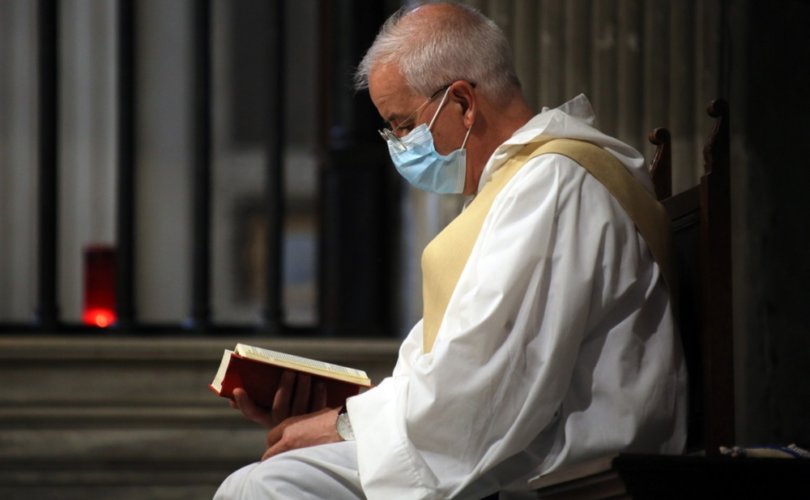 KITCHENER, Ontario, October 30, 2020 (LifeSiteNews) — A Canadian Catholic church has suspended its Sunday Latin Mass due to a “lack of adherence to Diocesan safety protocols,” causing some who attend the Mass to voice their anger over the decision.

On Friday, October 16, parishioners of St. Mary Our Lady of the Seven Sorrows Roman Catholic Church, located in Kitchener, Ontario, were notified by their parish that the Mass in the Extraordinary Form celebrated on Sundays would be suspended “until further notice.”

“Due [to] the lack of adherence to Diocesan safety protocols, the 3 pm Latin Mass has been suspended until further notice,” reads the note from the parish posted to its Facebook page and website.

“This was a difficult decision for the leadership of St. Mary’s and the Chancellor of the Diocese to make. For those wishing to attend a Latin Mass, two others are still taking place at St. Ann's Parish in downtown Hamilton — one at 8 am and the other at 12 noon.”

LifeSiteNews spoke with an attendee of the Latin Mass at St. Mary’s in Kitchener, who said she believes that the postponement was “odd,” done not only because some attendees were not wearing masks.

“Is it not odd? There have been Latin Masses. It’s really weird — three, which have been recently canceled,” said a regular parishioner and attendant of the Latin Mass at St. Mary’s, who asked not to be identified due to fear of being stigmatized, to LifeSiteNews.

“What’s really behind this decision? I wonder. Is it just masks? There is no indication of when this will be reviewed, reinstated. What’s the measure which you [the diocese] are deciding to do this?”

Fr. Brendan McGrath is the Hamilton diocesan director of pastoral care for the Extraordinary Form. He serves as the main celebrant of the Latin Mass in Kitchener and in other parts of the diocese that offer the Latin Mass. LifeSiteNews reached out to him for comment on the situation but as of press time did not receive a response.

In the Diocese of Hamilton, in addition to St. Mary’s in Kitchener, LifeSiteNews confirmed that the Latin Mass has also been postponed at St. Mary of the Assumption Parish in Owen Sound and canceled at St. Basil’s Parish in Brantford.

According to a Facebook post dated July 5, the Latin Mass in Branford was canceled due to COVID-19 as well as “misconceptions” regarding the Extraordinary Form.

“Dear Friends in Christ, [I]t is with a heavy heart to inform you that Fr. D’Souza has cancelled the Latin Mass at St. Basil’s. His reasons were administrative, COVID related and misconceptions on the TLM. We are now parish orphans. We are waiting to hear back from Fr. McGrath on where we can possibly go and/or what can we do[.] Please pray,” reads the July 5 Facebook post from the Brantford Latin Mass Community.

Currently, the Latin Mass is still being said in the Hamilton diocese at St. Ann Parish. The diocese’s website still lists Kitchener and Owen Sound as locations.

Ontario premier Doug Ford announced in early October that masks would be mandated in all indoor “public” settings. Regarding private places, such as a church or a place of worship, the government’s guidelines state that face coverings are “strongly recommended.”

Bishop Douglas Crosby of the Diocese of Hamilton revised his diocese’s COVID-19 protocols on October 7 to in effect make the wearing of masks mandatory. Masks were previously not explicitly mandated.

Churches in the Diocese of Hamilton reopened their doors for the celebration of Mass on June 16, following the government of Ontario under Premier Ford allowing indoor worship to resume effective June 12.

Under the Diocese of Hamilton’s reopening guidelines, issued by Bishop Douglas Crosby on June 10, there is no mention of mandatory mask-wearing. However, the October 7 guidelines state clearly that masks must “worn at all times,” adding that those who are unable to wear a mask must sit in a “designated zone.”

“In accord with the current government legislation, all persons are required to wear a mask or face covering upon entry into the church. This includes priests and other liturgical ministers. Only the priest, reader and cantor are permitted to remove their masks when in the sanctuary at a distance of four metres from the members of the assembly,” read the guidelines.

“Those who are unable to wear a mask because of an underlying medical condition which inhibits their ability to wear a mask, are to be admitted to the church, and are to be seated in a designated area at least four metres away from others. They may not come forward to receive Communion with others; the priest or extraordinary minister will bring them Communion where they are seated,” read the guidelines.

LifeSiteNews contacted the Diocese of Hamilton’s communications and public relations manager, Pam Aleman, and the Very Reverend Monsignor Murray J. Kroetsch, the chancellor of the Diocese of Hamilton, for comment regarding the suspension of the Latin Mass at St. Mary’s in Kitchener. There was no response as of press time.

The Latin Mass attendee of St. Mary’s in Kitchener who spoke with LifeSiteNews said she estimates that about 40 percent of those who attended the Latin Mass before it was postponed wore masks, but she refused to do so.

“In the house of God, I refuse to wear a mask. … I don’t wear the mask in God’s house. I feel it’s a form of sacrilege, and I’m not being rash and cavalier,” the attendee told LifeSiteNews.

A September 29 Facebook post from the Kitchener Latin Mass Community spells out that those who attend the Latin Mass must “remain obedient to our spiritual and government leaders or we risk the closing of our church.”

“The Hamilton diocese is requesting that all parishioners entering their churches wear a face mask in compliance with local bylaws. Despite the discomfort and inconvenience of wearing a mask during Mass we must remain obedient to our spiritual and government leaders or we risk the closing of our church. Please offer this up as a penance for our individual sins and for the conversion of sinners,” reads the September 29 Kitchener Latin Mass Facebook post.

LifeSiteNews also spoke with a second Latin Mass attendee of St. Mary’s in Kitchener, who also did not want to be named. She claimed there was a buildup of pressure, from church staff in the weeks leading up to the last Latin Mass said on October 11, for people to wear masks in church.

“They speak of charity and then chastised us for not wearing masks,” said the attendee.

The first Kitchener St. Mary’s Latin Mass attendee who spoke to LifeSiteNews also claimed she witnessed “really callous treatment” of an elderly person who refused to wear a mask after he was asked to do so by church staff.

“The courtesies that are extended at Costco, for those who don’t wear a mask, are not being extended at the church, and people are being bullied, and shamed.”

LifeSiteNews contacted the Pastor of St. Mary’s in Kitchener, Father Toby Collins, to ask him why the Latin Mass was suspended. As of press time, there was no response.

A Catholic theologian who works at a Canadian Catholic university provided an opinion to LifeSiteNews about whether or not a bishop can mandate that his flock wear masks in church. The professor concluded that although one could argue that a universal masking mandate inside a church does not bind one in conscience to following the law, one should generally still obey his bishop in this regard.

“Even if a given law does not bind in conscience, we should generally still obey, if disobedience would cause significant ‘scandal and disturbance,’” said the professor, who asked not to be named, to LifeSiteNews.

“The thing about authority is that it itself need not be ‘just,’ but it’s still authority. It’s almost a moot point whether the bishop has the legitimate authority to mandate masks; in theory, he does (imagine a truly lethal pandemic, for example — but in such a case, we wouldn’t need laws to prompt us to protect ourselves). Yet, for all intents and purposes, the bishop is the final court of appeal — barring an intervention by the Pope, which is, to say the least, not likely. What he says in a church or diocese usually goes.”

The Diocese of Hamilton’s June 10 re-opening message from Bishop Crosby mentioned that Holy Communion is to be received on the hand only. The diocese’s October 7 message added that “no exceptions” to this rule will be allowed.

“We are heartsick and soul-sick,” said the second Kitchener St. Mary’s Latin Mass attendee who spoke to LifeSiteNews.

“We haven’t lost hope because we recognize God does not abandon us. Praying is very important, but being active is important as well.”