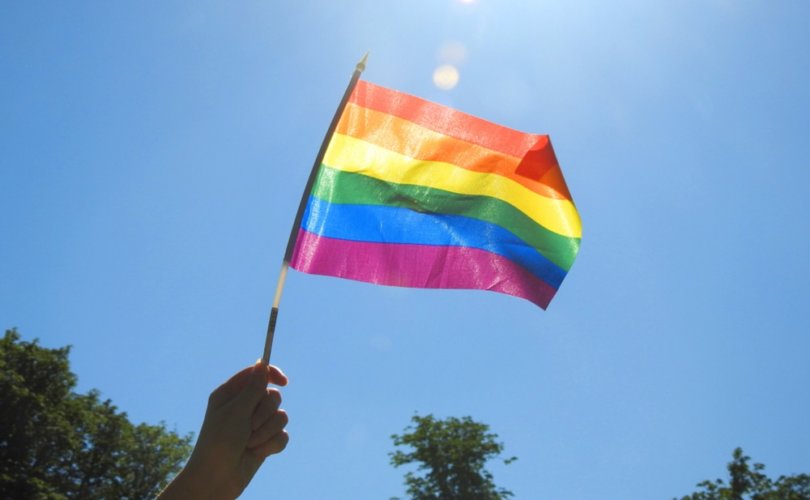 St. Jerome’s University, a publicly funded Catholic institution federated with the University of Waterloo, explained in a press release that it was doing so to be welcoming to all.

“In recent years, it had become painfully evident that our decision not to fly the Pride flag was sending the wrong message; namely, SJU was not a welcoming space for people who identified as LGBTQ+,” interim president Dr. Scott Kline said in the release.

“This was never our intention and, in fact, that message contradicts our mission and dedication to being community builders. For us, the flag represents our commitment to our students and to all members of the SJU community. The time was right to provide a symbolic reminder that ‘all are welcome in this place,’” stated Kline.

“As an academic community rooted in the Catholic tradition, the virtue of hospitality provides direction to us. It calls us to reflect on how we treat our guests and to consider our place in the broader community.”

But the rainbow “Pride” flag must be seen as a symbol of the celebration of homosexuality and dominance of the LGBT agenda, as pointed out by LifeSite’s Doug Mainwaring.

Christian institutions might intend “Pride” flags to show “inclusiveness and tolerance,” but “their presence is in reality a sign of the unabashed brazenness of the ancient enemy of Christ planting his flag wherever he can to claim God’s people for himself,” warned Mainwaring.

LifeSiteNews contacted Kline for a comment but did not receive a reply. However, a number of SJU alumni took to Twitter to decry their alma mater’s move, including Campaign Life youth coordinator Josie Luetke.

As an alumna of @StJeromesUni, I am ashamed that SJU is making such a public mockery of its “Catholic heritage.” I call on @DioceseHamilton and @Fr_Toby to publicly condemn this move. https://t.co/3yw8lp3LEx

Luetke was “dismayed but not surprised” by the decision, she told LifeSiteNews in an email.

“While there are still some truly excellent professors at the university who I must recognize, it did become apparent to me early on in my time there that many more of those at SJU were highly interested in manipulating or attempting to redefine Catholicism,” she said.

It was “quite revealing that University of Waterloo President Feridun Hamdullahpur tweeted in response: ‘I wish more people were open to change and building a more inclusive society like this.’ Indeed, change is what SJU is after,” added Luetke.

St. Jerome's proudly displaying its taste for modern fashions and fetishes, but nary a sign of its Catholicism. Indeed, the crucifix & rainbow flag are incompatible. https://t.co/hB6l8Bicqe

There is very little that distinguishes St. Jerome's from any other secular university or college.

SJU is known for its high toleration of dissent. In one notable instance, it invited transgender activist Sason Bear Bergman, a woman who presents herself as a man, who is married to J. Wallace Skelton, equity adviser for the Toronto District School Board, to speak at its 2015 symposium.

“What bothers me the most is knowing that other Catholic youth like myself will be lured to St. Jerome’s under the impression that it is an authentically Catholic university, and once there will unknowingly absorb false teachings, like this celebration of the LGBTQ agenda,” Luetke told LifeSiteNews.

SJU describes itself on its website as “historically associated with the educational vision of the Congregation of the Resurrection,” a community of priests, brothers, and deacons founded in Poland in the nineteenth century.

“The Congregation of the Resurrection and the Diocese of Hamilton (which are affiliated with SJU), I would think, bear some responsibility in protecting the faithful from this danger, and so, at the very least, ought to publicly reprimand SJU for this decision,” Luetke said.

“If they do not, their silence will serve as a fitting explanation as to how ‘Catholic” colleges like SJU are able to get away with all that they do.”