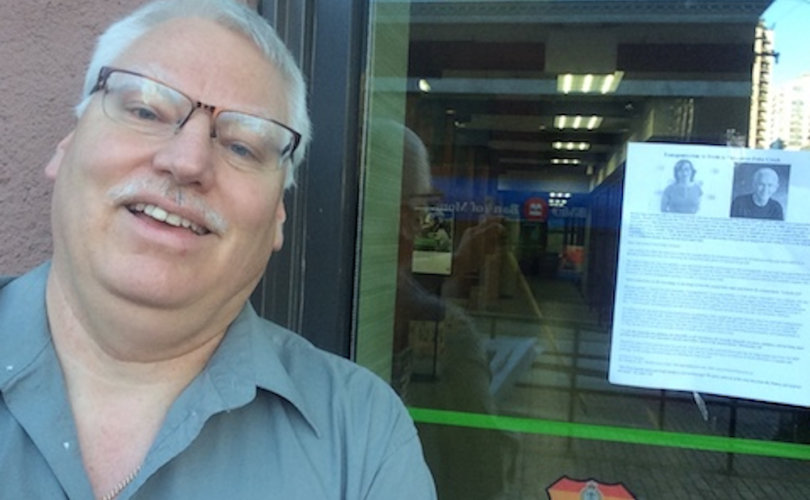 Bill Whatcott with his flyer

After a brief appearance Monday, Whatcott is scheduled to be back in a Toronto court on September 20 for state evidence against him on the criminal charge he wilfully promoted hatred against an identifiable group — the gay community.

And from September 10 to 13, he will go before the BC Human Rights Commission answering to allegations of discrimination from transgender activist Morgane Oger.

If found guilty of the crime of inciting hatred, Whatcott, 51, could be sentenced to up to two years in jail.

If found guilty by the BCHRC, Whatcott could be fined up to $75,000, and if he does not pay the fine, he could be charged with contempt of court and sent to jail.

On the positive side, public pressure is building on Ontario Premier Doug Ford’s government to drop the hate crime charge.

It was authorized under former Liberal attorney general Yasir Naqvi, who was turfed out of office in the June 7 Conservative landslide.

Some 39,660 people have signed a CitizenGo petition asking the charges be dropped. LifeSiteNews has launched a similar petition directed at Tory Attorney General Caroline Mulroney, which can be signed here.

Tell the Ontario government drop the charges against Bill Whatcott!

Moreover, American conservative media has decried the hate crime charge, with Ben Shapiro calling it “fascism” while tweeting an article from his Daily Wire, and Texas-based Mass Resistance and the Federalist linking to Whatcott’s impugned 2016 “gay zombie safe-sex” pamphlet his bail order forbids him from publishing.

“More people have read my flyer now than would have read it if the LGBT lobby would have left me alone rather than charging me with a hate crime,” Whatcott observed on his web portal Free North America.

“God does indeed work all things out for good, for those of us who love Him.”

Whatcott also describes the criminal charge as “politically motivated by homosexual activists” and warns that it bodes ill for free speech in Canada.

Toronto police charged Whatcott with the hate crime in May and issued a Canada-wide warrant for his arrest.

The charge resulted from a nearly two-year investigation into complaints against Whatcott after he registered in the 2016 Pride parade under the pseudonym Robert Clinton on behalf of the Gay Zombies Cannabis Consumers Association.

He and five others, dressed as erstwhile “gay zombies” in skin-tight green body suits and face masks, distributed some 3,000 “zombie safe-sex” packages that included a flyer warning of the physical and spiritual dangers of homosexual activity.

It blasted the alleged “homosexual activism” of Trudeau, as well as the sex-ed curriculum rolled out by former Ontario Premier Kathleen Wynne and its connection to one-time deputy minister of education Ben Levin, convicted in 2015 of three child pornography charges.

Well known for his Gospel-based activism, Whatcott turned himself in on June 22 in Calgary. He then endured a weekend in custody during which he was allegedly not given any food for 24 hours and deprived of medication for several hours for pink eye and a leg inflammation.

When released on bail, Whatcott returned to Alberta to discover he’d lost his job as an oilfield bus driver, and GoFundMe had shut down his wife’s fundraising page. The couple have since started a fundraising appeal on GoGetFunding.

The latter two are plaintiffs in a $104 million class action lawsuit that Elliott launched in August 2016 against Whatcott, and anyone who aided and abetted the “gay zombies.”

Ontario Superior Court Justice Paul Perell ruled in March 2017 the plaintiffs could not claim defamation of an entire group, such as the Pride Parade participants or the “LGTBTQ2SI Community,” or a sub-class of Liberals, but only of individuals.

But Perell ordered Whatcott to give the names of his fellow “zombies,” as well of the “unidentified financial backers” who funded the group’s expenses. That order is in abeyance while both parties appeal Perell’s decision.

As for the BC Human Rights hearing, Oger, who was born Ronan Oger and is vice president of BC’s NDP, claims two pamphlets Whatcott distributed during Oger’s May 2017 provincial election campaign were discriminatory and exposed him to “hatred and contempt” under BC’s Human Rights Code.

BC’s Liberal government amended the code’s Section 7 in July 2016 to include gender identity and expression as a basis for discrimination.

“The truth is there are only two genders, male and female, and they are God given and unchangeable,” wrote Whatcott in his flyer.

People can’t change their biological sex, but can “only cross dress and disfigure themselves with surgery and hormones to look like the gender they are not,” he wrote. “This practice is harmful and displeasing to God.”

The tribunal ruled in June that Whatcott could not access Oger’s medical records or have him undergo DNA testing as evidence he was born male, the Toronto Star reported in June.

Tribunal member Devyn Cousineau argued then that “the ‘truth’ of the statements in (Whatcott’s) flyer is not a defence” and proving Oger was born a male is “not relevant to legal issues.”

Oger protested early in the proceedings that a tribunal’s interim order erred in describing him as “born a male” and requested it refer to him as a “transgender woman.”