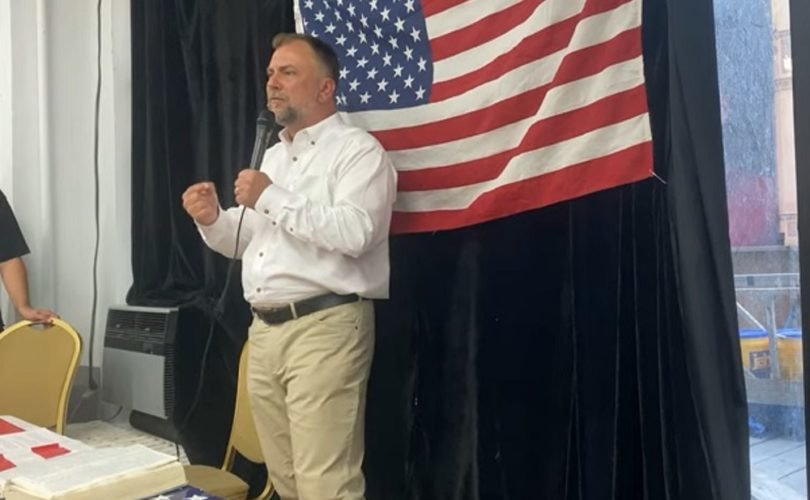 (LifeSiteNews) – Canadian Christian pastor Artur Pawlowski was arrested by customs officials Monday for offenses said to have occurred months ago upon returning home to Calgary from a tour of the United States.

Video of the arrest filmed from inside a private plane and posted on Pawlowski’s YouTube channel shows a border guard handcuff Pawlowski only inches away from the plane’s wing and escort him away.

According to a Rebel News report, Pawlowski was arrested on two charges, one related to a “court order” and the other for not “wearing a mask.” The charges stem from offenses said to have occurred in March and June of this year.

After being taken by border officials, Pawlowski was then handed over to the Calgary Police Service, where he was processed, searched, and placed in a holding cell.

Late Monday night, Pawlowski was let out on bail, according to attorney Sarah Miller, as reported by CTV.

Pawlowski said his arrest was “absolutely sickening” and that he has “never skipped bail” or “a court.”

“Everything they are doing to me, it symbolizes the tyranny of the Liberal and Conservative government, (Jason) Kenney’s government. Kenney has become a tyrant, that’s what he is,” Pawlowski said in a report from Rebel News.

Pawlowski landed at the Executive Flight Centre in Calgary on Monday afternoon, and there were many from his church awaiting his arrival. They never got to see him.

LifeSiteNews contacted Pawlowski for comment, but as of press time he has not been able to reply.

A video posted by Rebel News of the arrest includes an added part with a prerecorded message from Pawlowski, where he says, “If you’re watching this video right now that means I am in jail and they successfully arrested me.”

“Please pray for me, please support if you can, and may God bless you for everything you are doing to help me to get out there and be the light in this dark world.”

On Sunday, Pawlowski mentioned on his social media channels that he was returning home on Monday afternoon. He shared the fact he was flying via a private airplane.

Pawlowski spent the better part of July, August and September in America on his Courageous Faith tour, telling the crowds about his ordeals with police and health officials who targeted him for not following local COVID rules.

In mid-September, Pawlowski appeared virtually in court to argue against a pending jail sentence. He told a judge that he stood before the court as a “political prisoner of conscience.”

At the September hearing, AHS lawyer John Siddons argued that in addition to a 21-day jail sentence, Pawlowski should be fined $2,000 and pay $15,000 in costs. Siddons also recommended Dawid face a 10-day jail sentence.

The court is adjourned until October 13, at which time a judge will give his final ruling.

In June, a judge ruled that Alberta Health Services (AHS) had proved that the brothers were guilty “beyond a reasonable doubt of contempt” of court. This came after the brothers earlier breached an injunction order against them that said they would go to jail if they held church services.

In July AHS asked the court for a 21-day jail sentence against Pawlowski for “openly” flaunting COVID rules after holding worship services at his Cave of Adullam church located in Calgary in the spring of 2021.

Alberta Premier Jason Kenney recently introduced a vaccine passport system in the province, despite earlier saying he would not do so.