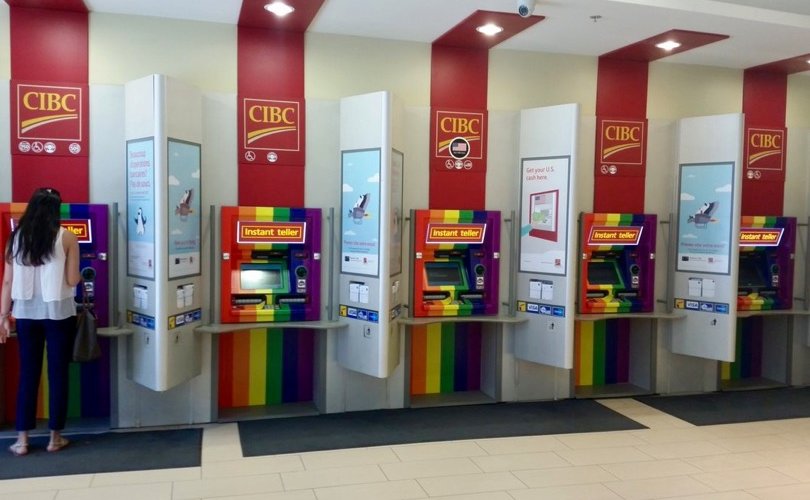 CIBC's rainbow painted ATMs in support of 'equality' and 'diversity'

OTTAWA, July 7, 2016 (LifeSiteNews) — The Canadian Imperial Bank of Commerce (CIBC) is defending the decision of a local Ottawa branch to paint its ATMs located in the front entrance in rainbow colours in support of homosexuality.

Ottawa resident Donald Bruneau said he was shocked when he saw the rainbow painted ATMs while making a recent trip to the branch located at 84 Bank Street in Ottawa.

“When I asked the teller the meaning behind the rainbow colors, she replied, ‘Equality.’ When I asked her if they would be willing to paint an image of the Christian cross that I wear around my neck on an ATM to celebrate Christian equality, she did not answer,” he told LifeSiteNews.

Bruneau said that CIBC’s decision to push the “gay agenda” on its ATMs has made him decide to switch to a different bank.

“When I use a bank, I simply want to perform financial transactions and not be confronted in my face with propaganda from the homosexual movement,” he said.

LifeSiteNews reached out to branch manager Robert Jenkins for comment, but Jenkins did not return messages left on his voicemail as well as an email.

LifeSiteNews then reached out to CIBC’s corporate head office located in Toronto. Olga Petrycki, CIBC’s Director of Public Relations, responded that CIBC is “proud” to support the LGBT movement.

“CIBC is proud to be an inclusive organization that supports the diversity of Canada and our communities,” she said in an email response.

On its website, CIBC states that it was one of the first corporations in Canada to “dedicate an entire month to the celebration of diversity” through “diversity education” of its about 40,000 employees. It also has its own employee-led “Pride Network” to support “gay, lesbian, bisexual and trans-identified employees.”

Last May at the Rome Life Forum LifeSiteNews editor-in-chief John Henry Westen spoke about what he believes is the forthcoming “imposition” of the homosexual ideology on individuals through pressures exerted by huge corporations, such as banks, who have signed onto promoting the ‘diversity and equality’ agenda.

“We have seen the financial coercion go from the international level to the national. As I mentioned earlier we have also begun to see it affect certain individuals. I would suggest it will not be too long before that pressure is applied to each individual,” he said.

The list of other banks which have gone out of their way to show their support for homosexuality includes, but is not limited to, Toronto-Dominion Bank, the Royal Bank of Canada, as well as the Bank of Montreal.

Westen fears the time is coming when individuals who refuse to embrace the homosexual agenda will have their financial freedoms stripped away as a penalty for not being an “upstanding citizen.”

Bruneau said that Christians need to start seeing the signs of the times with regard to the advancement of homosexuality.

“We Christians need to wake up, or we are going to be swallowed by this movement. I decided to leave this bank as a way of making a statement of my beliefs as a Christian,” he said.