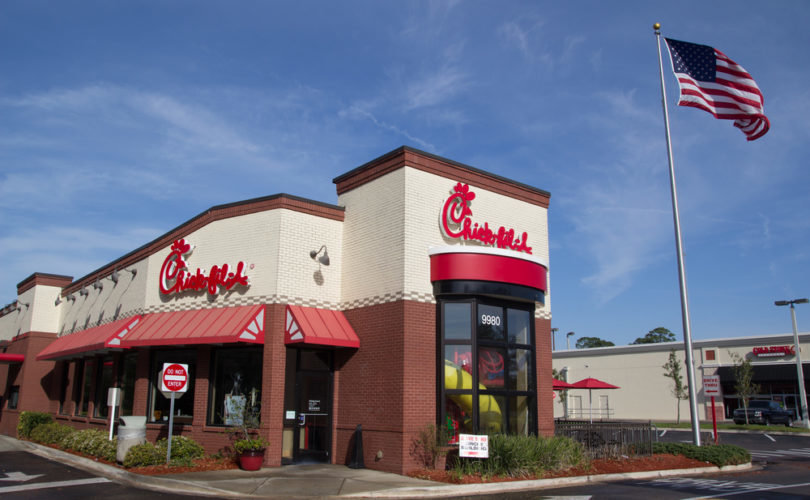 NANAIMO, British Columbia – City councilors from Nanaimo, B.C. voted last month to ban a Christian leadership conference scheduled to be podcast at the city’s convention centre because one of the sponsors of the conference was U.S. restaurant chain Chick-fil-A. According to one councilor, the chain spreads “divisiveness, homophobia…[and] expressions of hate” because of its CEO’s pro-marriage views.

News of the cancellation has made international headlines in recent days after video footage of the council meeting was featured on Canada's Sun News Network by host Ezra Levant.

The conference, which was simulcast at numerous venues around the world, featured top-level speakers including Laura Bush and Desmond Tutu.

The Christian view of marriage should “almost be a criminal point of view in this day and age.”

Chick-fil-A owner and Christian businessman Dan Cathy came under fire by homosexual activists in 2012 for publicly supporting marriage as a union between one man and one woman. Cathy reaffirmed his support for marriage earlier this year, but suggested he would be less outspoken on the issue.

But according to the Nanaimo councilors, that viewpoint is beyond the pale and not welcome in their city, even in the remote form of a conference sponsored by a fast-food chain owned by a man who holds that view.

At its May 5 meeting, the Nanaimo councilors voted 8-1 to revoke an approved booking for the “Beyond You” Leadercast event, scheduled for May 9 at the taxpayer-owned Vancouver Island Conference Centre. The motion banned “any events that are associated with organizations or people that promote or have a history of divisiveness, homophobia, or other expressions of hate” at the conference centre.

Councilor Jim Kipp said that banning the event was no worse than banning an organized crime ring, saying the Christian view of marriage should “almost be a criminal point of view in this day and age.”

However, Councilor Bill McKay, the only one to vote against the last-minute motion, argued that event organizers were not made aware that a vote against the event was taking place and that they should be permitted to defend their event before the city council.

During their televised meeting the councilors didn’t specify what they found “hateful” about the fast food chain. But Fred Pattje, who crafted and presented the motion, argued that the Christian view of marriage had no place in what he called a “progressive and open minded” city such as Nanaimo.

However, during a meeting on Monday, the mayor read a statement to “reaffirm” the rights and freedoms of “men and women of all faiths” to “utilize facilities that are owned by and/or in the control of the City of Nanaimo in the same manner that any such facilities are available for use by all members of the general public, subject always to the rule of the law.” He offered no apology for the May 5 motion.

As a result of the city council’s May 5 motion, lawyer and Sun News host Ezra Levant, one of Canada’s best known “freedom fighters,” has announced he plans to launch a lawsuit.

“We need to make sure these anti-Christian politicians learn their lesson,” he wrote on his website promoting the lawsuit. “We need to show them how wrong they were. We need to take them to court, to teach them, first-hand, that the Charter of Rights guarantees religious equality to everyone – including Christians. That’s why we’ve got to sue them, and not let them off the hook.”

Levant critiqued the city council proceedings as “vicious” against those who hold Christian beliefs.

“Imagine if it were a Jewish or Muslim or Sikh or Hindu group that was denounced in this vicious manner. It’s impossible to imagine. The media reaction would have been immediate and powerful – and the bigoted councilors would have been forced to resign,” he said.

Levant has created an online petition asking city councilors to reverse their ruling. He is also hoping to raise $5,000 to aid legal proceedings against the city.

“I know Nanaimo well – it’s one of my favourite cities,” said Levant. “This explosion of rage and anti-Christian bigotry does not represent the city – or Canada. We’ve got to fight back now.”

The high-profile Leadercast event brings together some of the world’s most powerful movers and shakers to empower participants to become better, more effective leaders. This year’s event took place in Atlanta, Georgia and was to be simulcast in many cities around the world, including a planned venue in Nanaimo.

‘Progressivism’: the greatest source of death and terror in the twentieth century
Why do ‘progressives’ use force to redefine society? Nietzsche knew
Obama’s second-term agenda: A progressive army
‘Guilty as charged’: Chick-Fil-A owner stands by true marriage stance
Chick-Fil-A confirms record-smashing sales on Appreciation Day
Chick-fil-A CEO: Supreme Court rulings on gay ‘marriage’ mark ‘a sad day for our nation’
Chick-fil-A CEO: I still oppose gay ‘marriage’ but won’t be too vocal about it