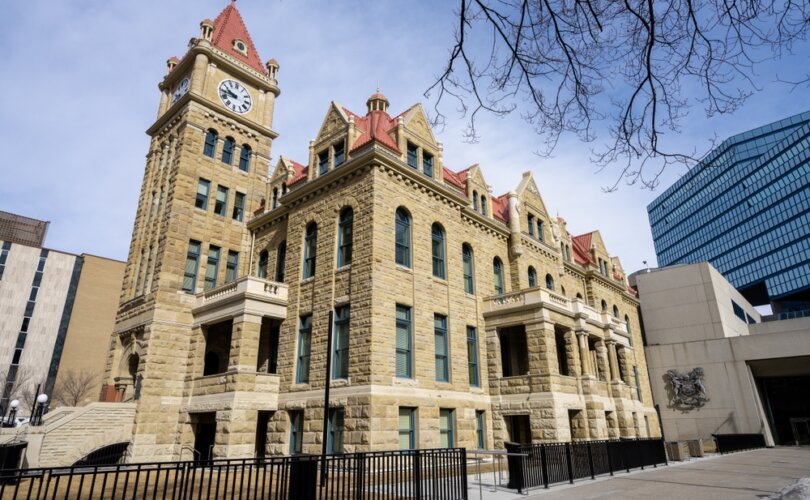 CALGARY, Alberta  (LifeSiteNews) — Canada’s most populous western city has passed a motion directing its managers to draft a bylaw that would severely limit the distribution of pro-life flyers to people’s homes, in what is being described by a top pro-life group as a direct attack on “pro-life speech.”

The motion (found on page 1325) was brought forth by Calgary’s Ward 2 Councilor Jennifer Wyness and was unanimously passed last Wednesday with the full support of the city’s left-leaning mayor, Jyoti Gondek .

Specifically, the motion directs the city administration to draft a bylaw that would require that all “flyers containing one or more images showing, or claiming to show, a fetus or any part of a fetus, must conceal these images from view through means such as, but not limited to: securing through adhesives and envelopes.”

The bylaw would also mandate that flyers containing “one or more images showing, or claiming to show, a fetus or any part of a fetus, include a viewer discretion warning,” with a final provision in the motion saying the bylaw will include “any other related measure that Administration deems advisable.”

As reported by Global News, Wyness claimed that the new restriction is about “representing the community and finding a way to balance everybody’s belief system and rights.”

Campaign Life Coalition’s (CLC) Director of Communications Pete Baklinski told LifeSiteNews that while Calgary city councilors are “right to be disturbed by abortion victim images,” they should work “to ban what the images represent, the brutal and horrific murder of children inside the wombs’ of their mothers.”

“Censoring these images is morally equivalent to censoring images of the holocaust, or of child labor, or of racial injustice. Shame on these city councilors and on Jennifer Wyness for choosing to distance themselves from the real victims here – preborn babies destroyed by abortion,” Baklinski stated.

Baklinski continued by saying that Wyness and other councilors who want to restrict the pro-life flyers are “choosing to stand with those who want to deny and hide the abortion holocaust,” adding that the bylaw is nothing more than a “direct attack on pro-life free speech.”

Bylaw will ‘likely be subject to legal challenge’

Lawyer Marty Moore with the Justice Centre for Constitutional Freedoms (JCCF) told LifeSiteNews that from a constitutional perspective, “there are serious concerns with Calgary City Council’s move to place restrictions on pro-life mailbox flyers.”

In defense of the crackdown on the flyers, Gondek said the city has been “fighting” pro-life flyers for “a long time,” and images of babies who have been aborted are “incredibly traumatizing.” She also stated that she had a flyer with these images “dropped” into her “mailbox after a miscarriage and that is not something I wish for other people to go through.”

Overall, the new bylaw seems to be very specific in its targeting of pro-life messaging, which may present an issue according to constitutional lawyers, although Gondek seems unconcerned.

“If you want to make an argument, you can go ahead and make it. You can be pro-life all day long, but we don’t need to see your graphic images,” she said, according to the Calgary Herald.

However, Moore told LifeSiteNews that as a preliminary constitutional issue, Calgary “does not have jurisdiction to enact restrictions for the purpose of expressing moral condemnation on certain kinds of expression.”

“That is the exclusive jurisdiction of the federal government. There are several indications that Calgary City Council is acting on the basis of moral opposition to certain pro-life flyers, which could legally render a bylaw invalid,” explained Moore, adding that the proposed bylaw “clearly restricts the Charter protection for freedom of expression.”

“With the bylaw proposal specifically targeting expression bringing awareness to the results of abortion, and not graphic imagery more generally, a strong argument could be made that the proposed bylaw is seeking to limit political expression, which should not be restricted without very significant demonstrated justification,” outlined Moore.

“A restriction on graphic images that applies equally, for example, to images of victims of car accidents and abortions would be easier for government to justify than a restriction clearly targeting political expression on a particular issue, in this case abortion.”

Moore also told LifeSiteNews that the potential constitutional concerns surrounding the proposed bylaw, “will likely be subject to legal challenge.”

In response to the passing of the motion, CLC is urging all “pro-life advocates living in Calgary” to contact their city councilor and urge them to stand with “preborn victims and to defend freedom of expression for pro-life advocates.”

CLC has an online tool to contact one’s city councilor.