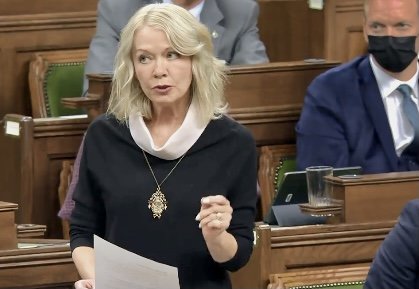 OTTAWA (LifeSiteNews) – Candice Bergen, the deputy leader of the Conservative Party of Canada (CPC) blasted Prime Minister Justin Trudeau’s name-calling of Canadian truckers taking part in the freedom convoy, reminding her opponents of his past when he wore blackface many times.

In response to Bergen, Liberal MP Marco Mendicino, who is also Canada’s Minister of Public Safety, tried to lump in all freedom convoy protesters as vaccine deniers and extremists.

Bergen said in response to Mendicino, “I apologize that that minister is misleading Canadians.”

Trudeau has a history of wearing blackface and has said he does not even know how many times he has put on black makeup.

Canada’s parliament resumed sitting on Monday after more than a month off, while at the same time tens of thousands of Canadians from coast to coast have gathered in Ottawa as part of the “Freedom Convoy 2022” in protest against COVID mandates.

As the trucker convoy neared Ottawa, Trudeau fled the city, citing a COVID positive case in his family as the reason. Yesterday, he tweeted that he had tested positive for the virus despite having had three COVID jabs.

Trudeau on Monday in a press conference claimed the freedom convoy was full of Nazi and racist sympathies after mainstream media repeatedly highlighted a man seen at the protest holding a Confederate flag, as well as another image of a man holding a Nazi flag.

However, many conservative political commentators think the Nazi and Confederate flag holders were paid provocateurs, and not real convoy protesters. Some media outlets have put a reward for information leading to their identity.

Bergen did not take kindly to Trudeau lumping all the freedom convoy participants into the same group as two lone provocateurs.

“Contrary to some, there are thousands of passionate, patriotic and peaceful Canadians on the hill right now who just want to be heard. Well, the prime minister extended olive branch,” Bergen said.

The reality on the ground in Ottawa is that the thousands who gathered over the weekend as well as into this week have been peaceful, with zero arrests reported.

The “Freedom Convoy 2022” group says they are not going anywhere until their demands are met. They have raised $9.8 million in funds thus far.

Bergen’s fiery exchange with her Liberal opponents is a stark contrast to what CPC leader Erin O’Toole has publicly said. He has waffled repeatedly in his support for the freedom convoy.

Indeed, O’Toole’s days as leader of the CPC could soon come to an end. News broke Monday that 35 of his MPs signed a letter demanding an immediate leadership review.

Public opinion for COVID measures in Canada no longer has the will of the majority of Canadians, according to a recent poll.

In a poll released Monday, 54 percent of Canadians now say it’s time to “remove restrictions and let Canadians manage their own level of risk.”