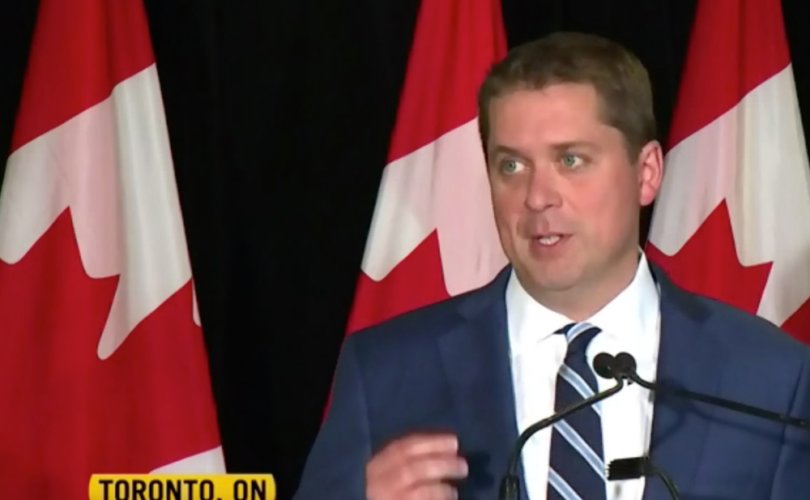 OTTAWA, August 29, 2019 (LifeSiteNews) — Canada’s Conservative leader Andrew Scheer stated repeatedly in a press conference today that if he wins the upcoming October election, he will “oppose” any “measures or attempts” to reopen the abortion debate and other “divisive social issues” such as homosexual “marriage.”

And while MPs can “express themselves on matters of conscience,” Scheer said, he would “ensure” a Conservative government would not reopen “divisive social issues.”

The Conservative leader’s position is a “slap in the face” to pro-life Canadians and put the Catholic leader in spiritual peril, Gunnarson told LifeSiteNews.

“Three hundred children are killed by abortion every day in Canada – this matters to a lot of MPs, and to many Canadians,” he told LifeSiteNews.

“So if Scheer will shut down any attempt to debate this issue, he’s not governing for all Canadians. Instead, he’s bowing down to the very loud minority of abortion activists who are afraid of a debate, and who will do anything to uphold abortion on demand in Canada.”

Scheer faced the media Thursday after not holding any public events for a week, during which time he’s been under attack and beset by questions about his views on abortion as well as homosexual “marriage.”

Last week, Liberal Minister for Public Safety Ralph Goodale tweeted a 14-year-old video in which Scheer spoke against homosexual “marriage” in the House of Commons.

To be a leader for all Canadians, the Conservative Party leader should now end his lifelong boycott of Pride events and explain whether he would still deny same-sex couples the right to marry, as he said in Parliament. pic.twitter.com/5WEyja6Ov5

Scheer said in 2005 that homosexual couples could not be married because they could not “commit to the natural procreation of children.”

He’s also been dogged by controversy over abortion after his Quebec lieutenant Alain Rayes told Conservative candidates in the province that as backbench MPs, they could not introduce private members’ bills or motions to restrict abortion, Global News reported Wednesday.

A reporter asked Scheer Thursday to “clarify today whether backbench MPs will be able to introduce motions or bills on issues touching on abortion or same-sex marriage and if you would allow a free vote both for your caucus and cabinet on such matters.”

“Well, I’ve always been very clear, nothing has changed for our party on this issue,” Scheer said today.

“Our party constitution grants, recognizes the rights of individual MPs, but it also recognizes that a Conservative government will not reopen these types of issues, and I will ensure that that happens,” he said.

“Canadians can have confidence…that a Conservative government will not reopen these debates, we will oppose measures that reopen these types of questions,” he reiterated.

“I will oppose measures or attempts to open this debate,” Scheer said.

“My personal views are that LGBT Canadians have the same inherent self-worth and dignity as every other Canadian and I will always uphold the law and always ensure that they have equal access to the institution of marriage as it exists under the law,” he said, as reported by Canadian Press.

Scheer said the Liberals are attempting to frame the debate.

“It’s really just the Liberals who are pushing this trying to distract from their record of failure and corruption and scandal, trying to dredge up issues from long ago that are, in an attempt to divide Canadians,” he said.

Gunnarson criticized Scheer for saying he would essentially muzzle MPs if elected.

“So much for allowing MPs to ‘express’ themselves when they can’t act on their convictions,” he said.

“This is a soft version of Trudeau’s anti-pro-life edict from 2014. What he’s saying is, you can ‘express’ yourselves on matters of conscience, but if you do, I’ll silence you, because we’re a team, and the party is more important than your personal beliefs and the beliefs of the Canadians who elected you,” added Gunnarson.

Campaign Life “has engaged thousands of its supporters to consider nominating, volunteering and electing pro-life candidates,” he said, adding: “While we prefer electing pro-life candidates regardless of what legislation may or may not happen, it is a slap in the face to tell all these people of goodwill that their candidate isn't allowed to bring forward pro-life legislation,” he said.

“It brings scandal to the Catholic Church, demoralizes Andrew Scheer’s base and jeopardizes his eternal soul,” he said. “May God have mercy on him. We continue to pray for him.”