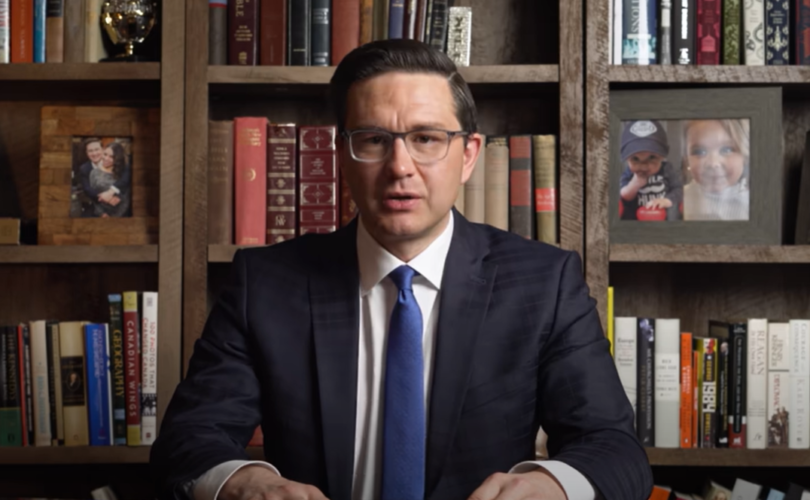 Pierre Poilievre, new leader of the Conservative Party of CanadaYouTube

OTTAWA (LifeSiteNews) — Conservative Party of Canada (CPC) leader Pierre Poilievre has rejected the notion that Canada should expand its already permissive euthanasia laws to include children and those suffering from mental illness.

In a September 22 letter published by the Canadian Physicians for Life, Poilievre condemned the recent talk by some doctors calling for Canada to expand its “Medical Assistance in Dying (MAiD)” laws to allow those suffering solely from mentally illness, minors and even young infants to qualify for the life-ending procedure.

“I do not support expanding physician assisted suicide to minors or people who are unable to truly consent,” continued Poilievre, adding that he does not accept “assisted suicide as a solution for mental illness.”

“My government will always promote and prioritize the health of Canadians across the country. We need to promote policies that prioritize compassionate palliative care, rather than making medically assisted dying the only option.”

A recent report in the National Post highlighted comments made by Dr. Louis Roy, a member of the Quebec College of Physicians, saying that assisted suicide should be expanded to infants up to age one, as well as minors under 18.

Roy made the comments to the House of Commons Special Joint Committee of MAiD (Medical Assistance in Dying).

Pro-life CPC MP Leslyn Lewis – who was recently appointed by Poilievre to his shadow cabinet – has likewise blasted the idea of expanding euthanasia to minors.

When Medical Assistance In Dying (MAID) was intro’d, it was to reduce suffering for those dying. Now, we compel doctors to act against their conscience, & the QC College of Physicians suggests MAID for infants. We’re running out of slope to slide down. This must stop. https://t.co/pyayaMe1O5

“We strongly object to Dr. Louis Roy’s suggestion that Canada should expand the euthanasia/MAID criteria to include infants from newborns to 1-year-olds,” wrote the group in an open letter released October 17.

“Medicine needs to be humble enough to admit that it doesn’t have all the answers when a life-limiting prognosis is given to an individual. We do not and cannot foresee exactly what a child’s quality of life will be in a few years and it is misplaced compassion to suggest that ending the child’s life constitutes care.”

The pro-life doctors also noted that there is no way “for parents to reasonably adjudicate whether ending their child’s life is legitimate.”

“Even the idea of this places immense pressure and unjust guilt on parents for the suffering of their children and families. Furthermore, we know that much physical suffering can be dramatically alleviated through proper palliative care.”

The group added that expanding euthanasia to infants “violates the principle of autonomy which was supposed to be essential to this law in Canada.”

“We are warning that this opens the door to prematurely ending the lives of persons with intellectual disabilities or other cognitive impairments.”

Euthanasia was legalized in Canada by the Liberals under Prime Minister Justin Trudeau in 2016 with Bill C-14.

The new law took away many “safeguards” found in the 2016 bill, including the prerequisite that the person who is looking to take his or her own life with assistance be terminally ill, and able to provide their consent at the time of death.

Bill C-7 also took away the requirement that two witnesses be present to demonstrate that the person who is seeking to kill himself indeed wanted to “die” with medical aid.

Due to this expansion, a recent report highlighted how disabled Canadians are now choosing assisted suicide to escape poverty and not because they are terminally ill.

Last month, the pro-life Delta Hospice Society  told LifeSiteNews that “thousands” of Canadians have moved to protect themselves from assisted suicide via its “Do Not Euthanize’ Advance Directive (DNE),” as they fear the current laws do not adequately protect them.