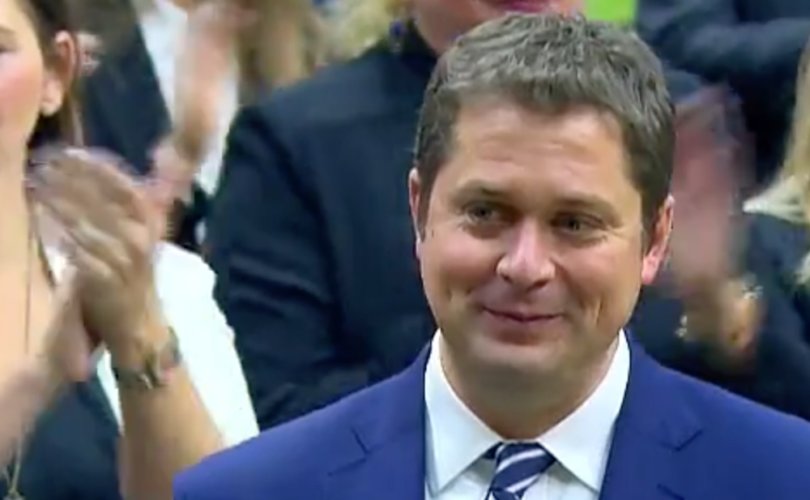 Andrew Scheer announcing that he will resign as leader of the Conservative Party of Canada, Ottawa, Dec. 12, 2019. Facebook live / screen grab

OTTAWA, Ontario, December 12, 2019 (LifeSiteNews) – Conservative Party of Canada leader Andrew Scheer announced today that he will resign as party leader. His announcement comes after his party lost the federal election to Justin Trudeau’s Liberals in October.

The 40-year-old Catholic father of five announced his decision to his caucus Thursday, and publicly in the House of Commons.

Scheer tweeted about his announcement and posted a video of it using Facebook.

“Our party is not a cult of personality it is not shaped by whoever’s name is on the masthead,” Scheer said. “My only ask to my fellow Conservatives is this: let’s stay united.”

The National Post reported that according to its sources, Scheer’s decision to resign was prompted by allegations he was using Conservative Party money to pay for his children’s private school tuition, first reported Thursday morning by Global News.

The Conservative Party’s executive director Dustin van Vugt responded to the allegation shortly after Scheer addressed the House, saying it was “normal practice” to cover expenses associated with relocating the national leader to the capital, including, in this case, “a differential in schooling costs between Regina and Ottawa.”

“CLC believes the Conservatives lost the election because Andrew Scheer betrayed the Party’s socially-conservative base, and essentially ran on a socially liberal platform, thus suppressing the party’s ‘small-c’ conservative base sufficiently enough to snatch defeat from the jaws of victory,” the organization stated in a press release.

“Scheer abandoned his socially conservative principles as leader and promised to ‘ensure’ his pro-life caucus members would not be able to bring forward the issue, and that he would continue Trudeau’s policy of funding foreign abortions with taxpayer money,” it added.

Jeff Gunnarson, National President of Campaign Life Coalition, said that his organization has “heard from many supporters who were looking for alternatives to the Conservatives or staying home on election day because they were displeased with Andrew Scheer as leader.”

“While many in the media say that the Conservatives were limited to their base, we believe that many more pro-life, pro-family and religious Canadians would have voted Conservative if the leader and party gave them a real reason to, other than the fact they were not Justin Trudeau. Scheer’s poorly articulated and clearly uncomfortable position of claiming to be personally pro-life while vowing to not touch the issue upset his socially conservative base, confused many people, and was seen as disingenuous,” he said.

Although Scheer had a perfect pro-life, pro-family voting record as an MP, as leader, he repeatedly insisted he would not open the abortion debate.

Moreover, he stated in August that while his MPs could  “express themselves on matters of conscience,” he would “ensure” a Conservative government would not reopen “divisive social issues.”

Scheer also stated then that he would uphold “homosexual marriage.”

“My personal views are that LGBT Canadians have the same inherent self-worth and dignity as every other Canadian and I will always uphold the law and always ensure that they have equal access to the institution of marriage as it exists under the law,” he said.

Scheer further stated on the campaign trail in October that he would personally vote against any private bills to restrict abortion.

As leader, “it is my responsibility to ensure that we do not re-open this [abortion] debate” and “that’s exactly what I’ll do and that’s why I’ll vote against measures that attempt to re-open this debate.”

After the election, Scheer’s critics both within and without his party blamed the Conservative loss on Scheer’s failure to distance himself from his past support for pro-life laws and opposition to same-sex “marriage.”

But Campaign Life's post-election analysis argued that Scheer’s many poor decisions angered and alienated the party’s natural social conservative base, and represented “voter suppression” by Scheer against his own voters.

It’s not clear yet what the rules of the leadership race will be, but the party’s convention is scheduled for April 16 to 18 in Toronto.

Campaign Life Coalition is now calling on all pro-life and pro-family Canadians to join or renew their membership in the Conservative Party so they can vote in the upcoming leadership contest to choose a replacement for Scheer.

The pro-life organization is asking pro-lifers who have joined or renewed for this purpose to let Campaign Life know by email (click here) they have done so.

Any Canadian 14 years of age or older can join the Conservative Party.

For information about joining the Conservative party, click here.