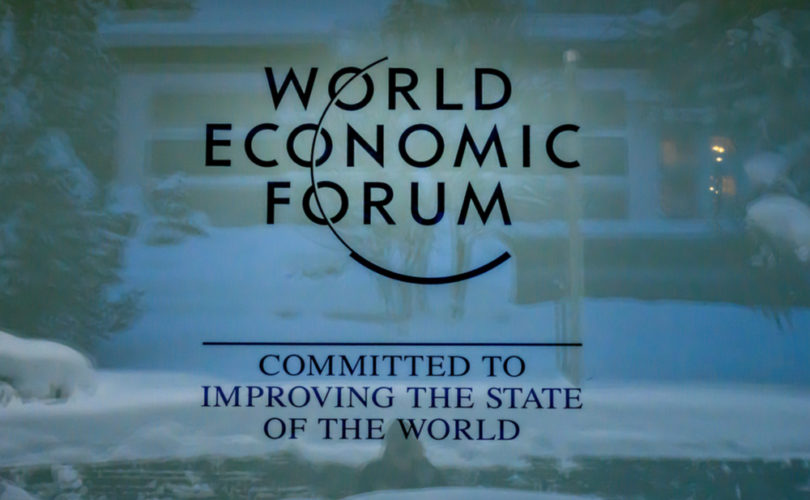 “Well, listen, I don’t think that the WEF threatens Canada’s sovereignty,” Charest replied in response to a question by Rebel News reporter Alexandra Lavoie about globalists influence in Canada.

“Besides, the last time I was there I was there with [former Conservative Prime Minister] Stephen Harper,” the candidate added.

.@JeanCharest_ says: “I don’t think the WEF threatens Canada’s sovereignty,” when asked by @ThevoiceAlexa and refused to answer whether he’s worried about digital security after Trudeau froze bank accounts.https://t.co/U3rVpK1Wmj pic.twitter.com/nDMURzwF0z

After dismissing the WEF’s influence over Canadian politics, despite both Prime Minister Justin Trudeau and Finance Minister Chrystia Freeland having ties to the organization behind the radical “Great Reset” agenda, Lavoie asked Charest what his stance is on digital IDs and digital security, particularly after the Trudeau government froze the bank accounts of Freedom Convoy protesters without a court order earlier this year.

Refusing to answer, Charest said he was taking her question as a “comment,” and if “there are any other questions” to “please go ahead.”

As mentioned by Charest, he himself has ties to the World Economic Forum, being listed under the “people” affiliated with the globalist group on their official website.

Despite being in the race for federal conservative leadership, Charest has formerly held office as the Liberal Party premier of Quebec, drawing criticism from other candidates that he is not a genuine conservative.

Charest has also been under fire by leadership opponents for his role as a consultant with Chinese telecommunications company Huawei during the time it was alleged that Huawei’s 5G networks allowed surveillance by the Communist Chinese government.

During a leadership debate, front-runner candidate Pierre Poilievre pressed Charest by asking him how much money he received from Huawei during his time as a consultant, and much like the question by Rebel News regarding digital security, Charest refused to answer.

For those unfamiliar, the WEF’s Great Reset is a radical socialist plan designed by global elites that “seeks to ‘push the reset button’ on the global economy” and establish a radical New World Order that seems to closely emulate many aspects of the Chinese Social Credit System.

In fact, the architect of the agenda, WEF chairman Klaus Schwab, has praised Communist Chinese President Xi Jinping and the “progress” his totalitarian regime has made in recent years.

China’s “Social Credit System,” which Schwab seems to especially admire, has become mandatory in China during Xi Jinping’s reign. One critic has called it the “nightmare of the world’s first truly totalitarian state” with the rollout of a nationwide system that rates the “trustworthiness” of its 1.4 billion citizens.