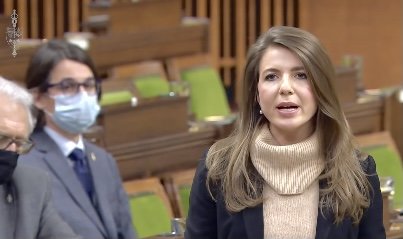 OTTAWA (LifeSiteNews) – Canadian Conservative Member of Parliament (MP) Raquel Dancho had harsh words for Prime Minister Justin Trudeau during a speech she delivered last night, saying “shame” on him for how is treating Canadians.

She opened the speech by praising the Freedom Convoy and expressing her contentment that after “two long years of division” that a debate was finally taking place in Parliament.

She called on the Prime Minister to work for “national unity” considering all the “trauma” that his policies have cause Canadians.

“If there’s any member in this house that does not believe Canadians have been through trauma these past two years, they clearly have not been doing their job and listening to their constituents,” she said.

She stated a litany of “horrific” things she has heard from her constituents in her riding of Kidonan-St. Paul, Manitoba.

She said she has seen eating disorders rise, as well as seniors opting for assisted suicide “rather than live one more month through isolation.”

“I’ve had grown men who’ve called me crying,” she said, “because their businesses are falling apart.”

She added that it was “not surprising” that Canadians have decided to mobilize to end COVID policies, because it is “an eruption of something that’s been simmering of pain and trauma and frustration for two long years.”

She derided Trudeau for his flip-flopping on the vaccine issue. “He said so many times … ‘vaccines for all those who want them, it’s a choice’ … then within days of calling that election he was yelling into a microphone at a Liberal rally that you have a right to not get vaccinated, but you don’t have a right to sit next to someone who is.”

“People are mobilizing because their governments have not listened to them for two years,” she said. “We’re seeing other governments around the world step up … none of that in Canada, absolutely none of that from the Prime Minister.”

“They need somebody in this house of privilege to come down from our ivory towers and say, ‘OK, little people we hear you, so sorry we’ve traumatized you … we’re going to step up and we’re going to give you some hope, here’s a deadline.”

To this statement, the “member from Papineau” – Justin Trudeau – started laughing.

“Shame on that member,” she said to the Speaker of the House, referring to the Prime Minister.

So far, Dancho’s speech has been viewed by millions of people across video and social networking platforms.

One supporter said she was “sobbing” from the speech that spoke to so many “broken” and hopeless” Canadians.