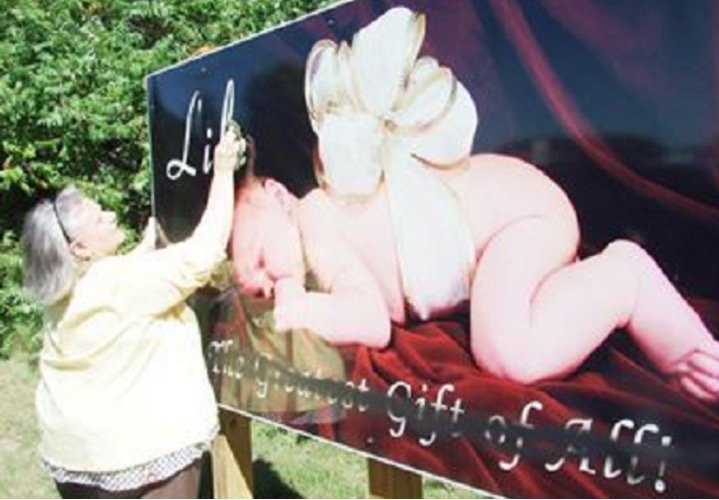 ORILLIA, Ontario, September 20, 2016 (LifeSiteNews) – Canadian pro-lifer Julie Holjevac is “sorry” rather than angry at the unknown vandals that spray-painted over two signs she and husband Mike erected in a Catholic cemetery bearing pro-life images and messaging.

“I wasn’t angry. I felt sad and I felt sorry for the person who did it,” Mrs. Holjevac told the Orillia Today. “They must really be hurting somewhere along the line or they are full of hate.”

One of the signs bears an image of an infant and adult holding hands with the caption, “Take my hand not my life.” The other shows a baby in a gift-wrapped bow over the message, “Life is the greatest gift of all.”

While Mrs. Holjevac was carefully removing the vandal’s black paint with lacquer thinner as a photographer with the Orillia Today looked on, a presumably pro-abortion person driving by yelled “b****” at her. She replied with equanimity: “Thank you. Your mother brought you into the world too.”

“We expected this might happen,” husband Mike, 70, told LifeSiteNews. “There are probably more pro-choice people in Canada than pro-life.” He said the two signs were erected two months ago and defaced about one month ago.

“We prayed that we’d be able to clean off the paint easily,” he said. “And we were.” Now the Holjevacs are considering a product they can spray on first so graffiti easily washes off.

The two 8 foot-by-4-foot signs cost the couple $1,200, and the local Knights of Columbus paid for the poles. This turned out to be the easy part, after the project became briefly snarled in red tape. The board of the Catholic cemetery readily agreed to the installation of the two signs, and the Department of Highways approved. But the City of Orillia insisted its permission was also needed and fined the Holjevacs $94 for erecting the signs without its consent.

Now all the paperwork has been approved and the only problem is with vandals. “It’s a hate crime,” Mrs. Holjevac said. “Freedom of speech cuts both ways. You don’t have to agree with me, but you don’t have to be destructive.” The Holjevacs have elected not to file a complaint with the police.

Simcoe.com, a local online news agency, quoted an unnamed woman calling the signs “horrible” and “obscene,” adding, “It’s sad and disgusting and it’s judgmental.” She argued that women who have abortions should not have their conduct challenged. “To have to then drive by that and see it would make someone feel worse.”

But Mr. Holjevac says, “If people want to make those kind of comments, the newspaper should print their names.” He said he had received plenty of support from pro-lifers and even the offer of financial assistance if the Holjevacs decided to buy the graffiti repellent. Its producer is an American manufacturer, Coval Molecular.

BC pro-life billboard remains up despite multiple vandal attacks