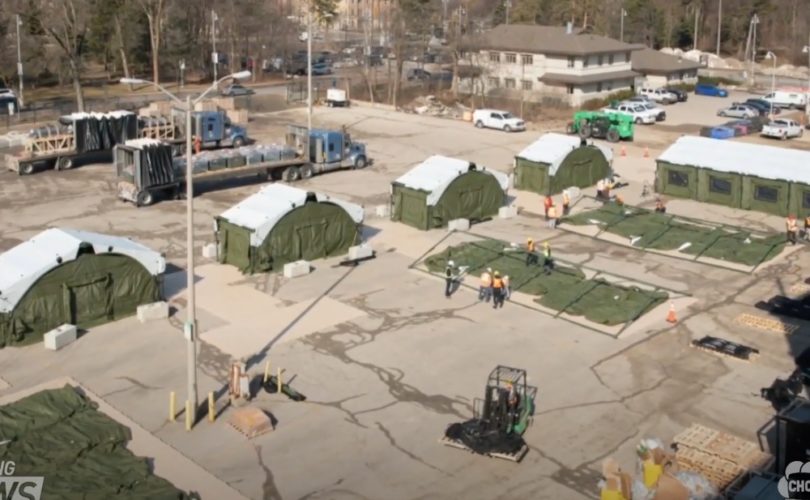 Ontario field hospital as it was under constructionYouTube / screenshot

HAMILTON, Ontario, July 8, 2021 (LifeSiteNews) — A “last resort” field hospital set up in Canada’s Ontario province to treat overflow COVID-19 patients was ordered to be shut down last month because the military-style facility had not been needed to treat a single patient.

According to a report by Canada’s CBC News, the Ontario Ministry of Health sent out a staff memo June 30 ordering the field hospital, set up by Hamilton Health Sciences (HHS), to close its doors immediately.

HHS public relations specialist Wendy Stewart affirmed that the facility, which was opened May 31 and equipped to treat up to 80 patients in eight tents, never treated a single one. She said the unit will be taken down by early September.

The memo which ordered the decommissioning lauded staff for the “tremendous amount of work [that] went into planning, constructing, staffing and equipping the state-of-the-art Hamilton Mobile Health Unit to ensure it was ready to receive patients from across Ontario if needed.”

“Hundreds of people were involved, and HHS is proud to have been part of this pandemic response initiative, along with our local, regional, provincial and federal partners,” the memo read.

Global News reported that upwards of 30 patients per week were being transferred to Hamilton from other Ontario localities in late April. In May, however, that number had already sharply declined.

“It's come along very well,” she said, but it’s “looking very unlikely that we will ever use it.”

“It certainly has been of value to see it there as we think about what could've been the trajectory of COVID.”

Hamilton’s field hospital is not the only one folding up its operations.

Toronto’s Sunnybrook Hospital was also ordered to close down its field unit, which saw only 32 patients during its four months of operation.

Robert Burgess, senior director of emergency preparedness at Sunnybrook Hospital in Toronto, told Global News that equipment and supplies were already being moved from the field unit into the main hospital building. He said the patients treated in the facility were “lower risk” and occupied only two of the unit’s 10 tents.

“The vast majority of the patients we saw, in fact all 32, were treated within the system and then either discharged or they moved on to the next level of care, like rehabilitation,” Burgess said.

The news of the mobile health units’ closures comes hard on the heels of previous reports which claimed that Ontario’s hospitals were overcrowded, with the federal government looking to recruit members of the military and the Canadian Red Cross to assist healthcare workers at the field units.

In April Stephen Warner, a spokesman for Ontario’s Solicitor General’s Office, said the federal government wanted to recruit additional help to deal with a “third wave” of coronavirus “cases.”

“We are exploring every potential measure to further build up Ontario's health-care workforce, including ongoing provincial initiatives to bolster the workforce and ensure our trained health-care professionals are deployed where they are needed most during this third wave,” he said in an email.

HHS spokeswoman Wendy Stewart told the media at the time that recruitment for the field hospital in Hamilton was “ongoing.”

At the end of April Ontario hospitals were supposedly “beyond their limits,” with 875 COVID-19 patients in critical care, according to Global News.

In a media release, the HHS said its ICU capacity was “severely stretched,” with its hospitals under significant pressure.

But just a few months later, Ontario’s Ministry of Health ordered the field hospitals in Toronto and Hamilton, determined unnecessary to deal with the COVID-19 caseload, to close down.

Many hospitals reported empty emergency rooms last year due to many people electing to forego treatment out of fear of contracting the coronavirus.

“Patients who may need to be coming in to get care … are choosing not [to] because of their fear of getting COVID in hospital,” said Dr. Gaurav Puri of Southlake Regional Health Centre in Newmarket in May 2020.

“They’re not even staffing [the hospital] with nurses because there's no patients,” Puri said. “It's eerie. It's definitely eerie.”

In the U.S., a study examining excess deaths between March 2020 and January 2021 found that “[e]xcess deaths not attributed to COVID-19 could reflect… non–COVID-19 deaths secondary to the pandemic, such as from delayed care or behavioral health crises.”

Meanwhile, Cancer Research UK reported in September 2020 that cancer screenings had been cancelled for roughly 3 million U.K. residents, with a 39 percent reduction in diagnostic tests for cancer.

In October 2020 the British Heart Foundation reported excess deaths from heart disease were up 13 percent for those under 65, saying, “We believe that delays in people seeking care, coupled with a reduced access to routine tests and treatments during the pandemic, have likely contributed to the rise in excess deaths.”