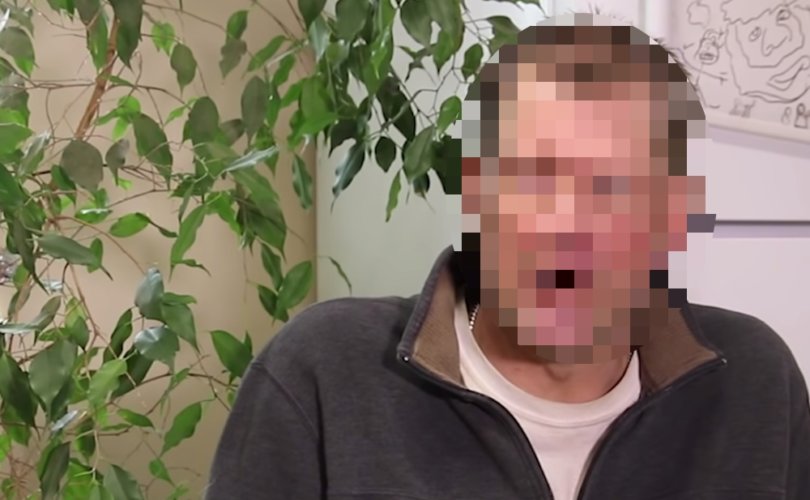 Canadian dad, referred to as 'CD' in court documents, speaks to Dan Dicks of Press for Truth on March 10, 2020 about his efforts to save his daughter from being 'transitioned' into a 'male.' His face has been blurred to respect court rulings.

VANCOUVER, British Columbia, September 4, 2020 (LifeSiteNews) — A British Columbia father, who went to court to stop his then-14-year-old daughter from receiving male hormones in her attempt to “identify” as male, now faces charges of criminal contempt of court for allegedly violating a publication ban forbidding him from identifying the parties in the case.

British Columbia’s attorney general filed an application in family court July 30 claiming the father gave three interviews in June in breach of the ban, and asking the court to declare this is criminal contempt of court.

Carey Linde, the father’s lawyer, says that as far as he knows this has never been done.

“This is not a pure criminal proceeding. It’s not a case of whether he pleads innocent or guilty. It’s in a family matter,” he told LifeSiteNews. “That’s what’s so peculiar about it.”

Linde and the father, who is referred to in court documents as CD, plan to challenge the publication ban on the grounds that it violates CD’s Charter right to freedom of speech.

If their Charter challenge to the publication ban fails, CD will argue that he engaged in “civil disobedience” for “a higher cause,” Linde said.

That higher cause is to warn parents of the terrible harm posed to their children by transgender activists, the B.C.’s Infants Act — which allows minor children to consent to medical treatment despite their parents’ objections — and the province’s Sexual Orientation and Gender Identity (SOGI) pro-transgender sex-ed curriculum — all issues that CD contends parents won’t hear about in mainstream media.

The father is thus prepared to tell the court he is “compelled by conscience to express those interests and to face whatever consequences the courts may decide,” Linde said.

However, Linde’s first line of defence during the father’s initial court appearance on Wednesday was to ask for a day to argue that B.C. Supreme Court Justice Michael Tammen should recuse himself for “perceived” bias.

The judge agreed to hear the matter on November 30.

Lawyers for the attorney general were present for the proceedings, and Tammen suggested then that the Crown consider bringing criminal contempt of court charges against Thompson and the father.

Thompson has not been charged and has since removed her February interview with CD. However, it is still accessible on sites within Canada and has been widely disseminated outside the country on such sites as Mass Resistance, as well as proliferating on social media. Other media interviews with the father are also easily accessible online.

Thompson told LifeSiteNews shortly after the March proceedings that the daughter’s lawyers — who include “queer” activist Barbara Findlay — admitted they were not acting under the direction of their client, who is now 15 years old and presumably does not want to pursue charges against her father.

“The tragedy is that statistically the odds are that this child will desist” — that is, return after puberty to identifying as her birth sex, Linde told LifeSiteNews.

“But the lawyers on the other side have so much invested in this child. It’s their trophy case. They’re going to ruin this kid's emotionality by leaning over backwards and saying, ‘No, no, no, don’t desist.’”

The tragic case has moved away from the fate of the daughter, who began receiving testosterone shots in March 2019 and has chosen to have minimal contact with her father.

It is now about the unrelenting efforts of the lawyers — and now B.C.’s NDP government — to stop CD from speaking publicly about his nightmarish experience.

Despite this, the father’s unsuccessful court battle to protect his “very vulnerable” daughter gained international attention since it began in early 2019.

CD and his wife share joint custody of the teenager, and he argued that his daughter, who has suffered ongoing emotional distress and depression since her parents separated in 2013, lacked the maturity to understand the radical and long-term consequences of testosterone, and had fallen under the sway of transgender activists.

When the girl was 13, school authorities referred her and her mother to a Vancouver-based transgender activist psychologist, who encouraged the girl to identify as a boy and to medically mutilate herself to appear more like a boy.

In August 2018, the girl and her mother met with a paediatric endocrinologist at the BC Children’s Hospital who recommended in the first meeting that she start testosterone shots.

When the mother told CD this was going to happen, he objected, but the endocrinologist told him a letter in December 2018 his consent was not needed.

In February 2019, B.C. Supreme Court Justice Gregory Bowden ruled that CD’s efforts to stop his daughter’s “transition” constituted “family violence” and he ordered the father to refer to his daughter by her preferred male pronouns and male name and not to discourage her “transition.”

In April 2019, Judge Francesca Marzari, who has ties to West Coast LEAF, issued a protection order at the behest of the daughter’s lawyers forbidding CD from speaking to the media and from referring to his daughter as a girl or using female pronouns when referring to her, under penalty of immediate arrest and jail.

In January 2020, however, the B.C. appeal court ruled that the father had not committed family violence and mitigated the previous rulings by supplanting them with conduct orders, which do not carry the penalty of immediate arrest and imprisonment for alleged breaches.

The conduct orders directed the father to refer to his daughter by her preferred male name and with male pronouns, and not to speak to any media and expired on April 15, 2020.

The appeal court ruled that the publication ban remain in effect “indefinitely.”