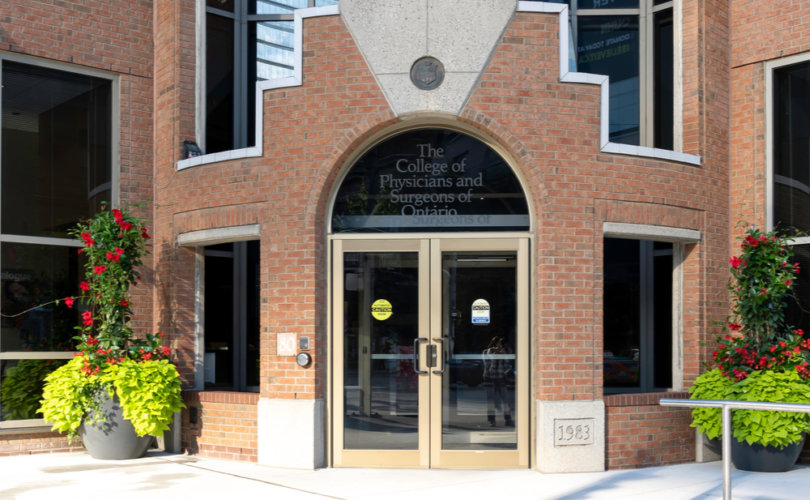 OTTAWA (LifeSiteNews) – A Catholic doctor of nearly 50 years from Ontario was stripped of her medical license because she refused to cooperate with a medical college investigation into why she allegedly gave out medical exemptions to patients for the experimental COVID shots.

Dr. Mary O’Connor confirmed with LifeSiteNews in an email that at midnight on December 23 the College of Physicians and Surgeons of Ontario (CPSO) took away her medical license, which was first granted in 1973.

“The College did take away my license on Dec 23, midnight.  They consider me a high-risk person that must be urgently dealt with,” O’Connor said via email.

“I just keep praying for strength, and I have had so much prayer support from so many people.”

A search on the CPSO website shows O’Connor’s status as suspended as of December 23. Restrictions on her license were first imposed by the college on November 5.

O’Connor, along with three other doctors, became the recent target of legal action by (CPSO) after refusing to cooperate with an investigation into why she allegedly gave medical exemptions for the experimental COVID shots.

In November, O’Connor along with Dr. Mark Trozzi, Dr. Rochangé Kilian, and Dr. Celeste Jean Thirlwell had a legal filing against them by the College of Physicians and Surgeons of Ontario because they did not comply with a request to hand over confidential patient information pursuant to an “investigation” by the college as to why they were granting COVID-19 vaccine medical exemptions to patients.

The college in its court filing is demanding that the Ontario Superior Court mandate its compliance.

The court filing, set to be heard on January 7, seeks to also allow investigators entry into the offices of the doctors to copy or remove “necessary documents.”

According to a report in the Ottawa Citizen, the CPSO has also taken issue with O’Connor calling the COVID injections “gene-therapy experiments” as opposed to calling them “vaccinations.”

In her email to LifeSiteNews, O’Connor said that her lawyers along with the other doctors “are committed to fight very hard.”

O’Connor said that Dr. Thirlwell is no longer part of her group fighting the CPSO’s demands, but that Ontario Dr. Patrick Phillips has been added.

“What an honour to be associated with them,” O’Connor told LifeSiteNews.

The CPSO’s investigation against O’Connor concerns “her conduct in relation to the COVID-19 pandemic and her completion of medical exemptions for COVID-19 vaccinations and diagnostic testing.”

Instead of releasing the records, the college maintains that O’Connor insisted they must first “define COVID-19″ and that she “will not be able to move forward without the College’s precise definition of COVID-19.”

The CPSO also claimed that O’Connor requested for them to “advise if [the college] knows the ingredients of the gene therapy experiments, the so-called vaccinations, being administered to humanity without informed consent.”

O’Connor’s lawyer, Michael Swinwood, said she will fight the case in court and that he does not “see the need for an investigation.”

“There is no malpractice or incompetence involved,” Swinwood said.

This is despite governments, media, and most in academia along with the medical community insisting that the COVID jabs not be called “gene therapy” or “experimental,” even though the jabs are in the clinical trial phase until 2023.

Also, the COVID jabs have been linked to a multitude of negative and often severe side effects.

In Ontario, official reports released by its Public Health unit state that more than 100 young people from ages 12 to 24 were diagnosed with myocarditis, or heart inflammation, after getting the shots.

In reality, the effects from the jabs on the young are feared to be much higher, according to Trozzi and others.

Despite reports of injuries and even deaths from those who have had the COVID jabs, the CPSO itself says that medical exemptions are only to be given out if one had a first dose of the jab and was injured.

LifeSiteNews set up a LifeFunder campaign for O’Connor in November, which to date has raised nearly $18,000 to help her cause.

Please consider supporting O’Connor in her brave stand for patients’ rights. All money raised will go towards paying her significant legal fees.