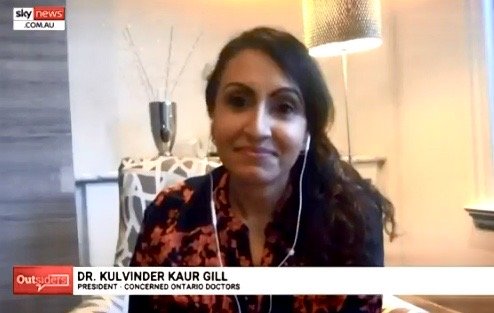 September 4, 2020 (LifeSiteNews) – A Canadian doctor said the “smears against Hydroxychloroquine” as an effective treatment for COVID-19 “need to stop,” and she raised concerns that a physician could get into trouble for even talking about the drug.

In a Sky News Australia interview during an August 29 episode of “Outsiders,” Dr. Kulvinder Gill alleged that in most of North America, along with a large portion of European nations and Australia and New Zealand, a doctor prescribing Hydroxychloroquine could invite an investigation from their local doctors’ college.

“In some jurisdictions, they’re even starting to investigate doctors who are merely talking about it,” Gill said. “They’re being censored as being spreading dangerous information when they’re simply talking about evidence-based medication.”

In May, Gill said a now dead Canadian government deal with China to produce a coronavirus vaccine is a “dangerous endeavour” and that Canada should instead fund vaccine trials with allied nations.

During the interview, Gill also talked about how the physician-patient relationship worldwide has seen a dangerous level of government intrusion due to the “extremely politicized” discussion around the prescription of Hydroxychloroquine to treat coronavirus.

“It’s absolutely appalling that we are seeing this unprecedented violation of the doctor-patient relationship where we have many of the developed countries around the world that are actually prohibiting doctors and sanctioning them if it is prescribed to their patients,” Gill said.

“And such a violation I have to stress has never occurred before for any medication ever. So this discussion has become extremely politicized. We really need to get back to talking about the science and the logic and the facts.”

Gill said that in “2020 we see a very dangerous and unprecedented violation of that very doctor-patient relationship.”

She noted that in the first stage of infection, the virus replicates and that is when flu-like symptoms are prevalent.

Gill said this is the stage when Hydroxychloroquine in combination with Zinc and Amithromycin is important, especially for older patients with comorbidities.

“There's one fundamental aspect which is critically missing in this discussion and people don’t seem to realize that there are two stages for COVID-19 disease that are very distinct and different,” Gill said.

“When not treated, high-risk patients may progress to the second stage,” added Gill, noting that this stage is when patients could experience pneumonia or an attack on organs such as the heart.

Gill stressed that Hydroxychloroquine is a “safe and generic” medication, noting its approval 65 years ago, and added that it is sold over the counter in many nations and is listed by the World Health Organization (WHO) as an essential medicine.

She also noted that when used in the right dosage, “there has been no reported cardiac or toxicity in all of the clinical trials and studies done in COVID-19 patients to date.”

“I think it's so fundamental for the public to understand that Hydroxychloroquine has its on-label uses for such things as Malaria prophylaxis or for the treatment of certain autoimmune conditions,” Gill said.

“However, doctors have always, always had the ability to prescribe existing approved medications for non-indicated conditions. This is known as off label use of that medication.”

Last week, Australian Labor MP Chris Bowen brought forward a motion in parliament that directly accused Gill and other doctors of spreading “misinformation” regarding the effectiveness of Hydroxychloroquine.

In her Sky News interview, Gill was asked about the attack by one of the show's hosts.

On social media, Gill blasted the fact that, according to her, certain medical terms seem to be forbidden.

“Published scientific evidence is now “#wrongthink” when it goes against the political narrative. The Truth, Humanity, T-cell Immunity and Hydroxychloroquine are now #ForbiddenWords and punishable in Trudeau’s Canada,” Gill wrote in an August 12 tweet.

Gill also came under fire for saying on social media that a COVID-19 vaccine is not necessary and that extended lockdowns do not accomplish anything.

“If you have not yet figured out that we don't need a vaccine, you are not paying attention. #FactsNotFear,” Gill tweeted August 4.

In another tweet on the same day, Gill blasted the lockdown measures.

“There is absolutely no medical or scientific reason for this prolonged, harmful and illogical lockdown. #FactsNotFear,” Gill wrote.

Gill’s Twitter messages drew the ire of André Picard, who works as the health columnist at The Globe and Mail. Picard said it was “shocking” to see a doctor say such things.

Gill tweeted back to Picard, saying, “It is quite shocking that a journalist with absolutely no medical training is attacking a MD for stating scientific facts. Not surprising given @picardonhealth is a Pierre Trudeau Foundation Mentor & on its Trudeau ‘#COVID19 Impact Committee’ to drive the political WHO narrative.”

Due to the attacks against her medical opinions, Gill announced on Twitter that she was seeking legal counsel to help fend off the attacks.