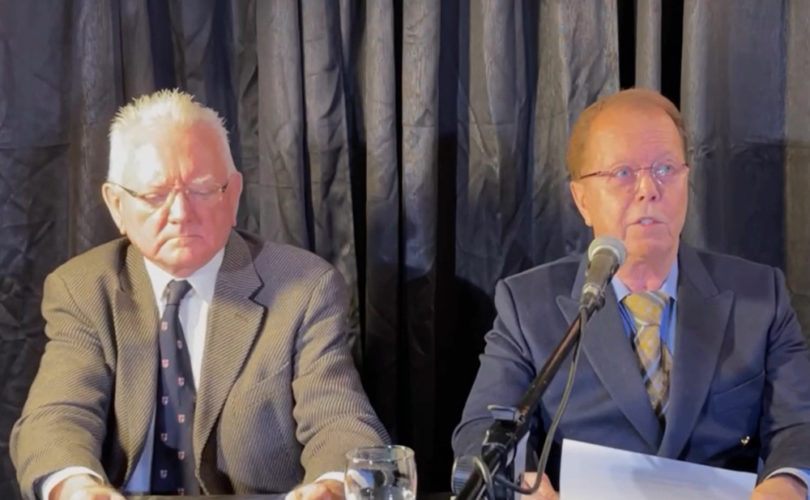 EDMONTON, Alberta, April 16, 2021 (LifeSiteNews) — Two prominent Canadian doctors have publicly blasted their provincial government for “intimidating” people “into compliance” with COVID-19 lockdowns, and called on politicians to open society back up.

“The entire population has been intimidated into compliance with the threat of outrageous fines and actual jail for disobedience. The government’s encouragement of citizens to snitch on each other is utterly reprehensible,” said Alberta Dr. Roger Hodkinson in a video announcement on April 12 in Edmonton that also featured Alberta Dr. Dennis Modry.

“Nothing works to stop the spread of this virus through society. Nothing could work, nothing did work, and nothing will work. This virus must just be allowed to run its course. Government must simply … allow the public to use its abundant common sense. Open up, Alberta.”

Both Modry and Hodkinson have been outspoken against COVID lockdowns. Their video address was posted by the anti-lockdown personality The Angry Albertan, and was directed at Alberta Premier Jason Kenney, Chief Medical Officer of Health Dr. Deena Hinshaw, and Minister of Health Tyler Shandro.

After their video conference, both Modry and Hodkinson attended and spoke at an anti-lockdown protest which took place at the Alberta legislature in Edmonton the same day.

Hodkinson explained that “the testing of asymptomatic people” should stop “immediately” and that the COVID-19 variants are “nothing to fear.” He talked about the failure to promote “the lifesaving potential of vitamin D,” of which he said there is “overwhelming evidence of protection from COVID-19.”

In the joint video, Hodkinson said that he is “not … anti-vaccine” or a conspiracy theorist, but that what is desperately needed today is for “the general public to hear common sense from a qualified person. And I’d like to think that’s me.”

“The government’s entire focus has been on one virus, ignoring all other measures of health and wellbeing. Furthermore, the profound loss of personal freedom resulting from the various mandates are an unforgivable assault on the very essence of our humanity and totally unwarranted given the scale of threat,” said Hodkinson.

“This is not Ebola. This is not SARS. In fact, Sweden and Florida clearly demonstrate that draconian actions have little impact on the final toll from COVID. However, even to debate these questions is now stigmatized by government, the media, and professional colleges as irresponsible, and to be resolutely suppressed.”

Hodkinson is a medical specialist in pathology and virology and served as the former chairman of the examination committee in general pathology for the Royal College of Physicians of Canada. He is also the chairman of a biotechnology company in North Carolina that sells COVID-19 tests.

Hodkinson questioned in his video conference why governments have failed to inform the public that COVID “vaccines are all strictly experimental,” lacking the “customary two to four years adverse event trials,” and are therefore, “in my view, by any definition, unsafe.”

“That is a failure, a spectacular failure of the second important medical ethic, that of informed consent. There was no need for a rushed vaccine given the scale of risk. And in my opinion, its use is profoundly reckless,” said Hodkinson.

LifeSiteNews posted a video of Hodkinson’s remarks on YouTube, which immediately saw the suspension of LifeSite’s account for one week. The account has since been banned permanently.

Modry was one of Alberta’s top heart surgeons, himself performing the province’s very first transplant in 1985. He is now retired.

“For over a year now, similar, ongoing, misleading information has continued to be promulgated by the mainstream media, while at the same time suppressing evidence that is counter to the government and industry-controlled narrative,” said Modry.

“Incentives for lockdowns are several and include massive financial and corporate motives, the protection of professional reputations that are on the wrong side of the science, political goals, possibly the proposed Great Reset of capitalism, as well as cognitive dissonance — that unique but all too common inability to accept new evidence which is counter to what you have been brainwashed to believe.”

Modry said “so many physicians, scientists, politicians, media professionals and business professionals” have been silenced for speaking out against lockdowns. “It is because they know that they will be sanctioned and run the risk of losing their professional license, their research grant, their tenure, or their job. And many have fallen prey.”

He mentioned the Great Barrington Declaration, which he said “defined the evidence in support of a targeted approach to protect the elderly and the vulnerable without creating the massive emotional, physical, mortal, and economic harm from lockdowns that we have witnessed and that so many of us have experienced.”

“In essence, thousands upon thousands of deaths worldwide and in Alberta have been quoted apparently as having died from COVID-19 as opposed to with a coincidental finding of COVID-19 where it was actually the underlying disease that killed the patient. Why is this happening in Alberta? It is because Alberta Health Service does not record the cycle thresholds for every patient that they claim died from COVID-19. So their data is misleading.”

Recently, Modry blasted the Kenney government’s approach to lockdowns, saying there’s “no logic to these usurpations of people’s civil rights.”

Last December, Modry wrote a letter to Kenney calling for an end to mask mandates and lockdowns. Almost three months later, on March 15, Kenney finally responded to Modry’s letter with one of his own, sharply rebuking him. Kenney called his submitted evidence “false.”

On March 31, Modry fired back at Kenney’s March 15 letter.

Its pastor, James Coates, had refused to comply with draconian coronavirus regulations and was jailed for 35 days. Grace Life members have now gone underground to worship.

Recently, in an unprecedented political move, 17 United Conservative Party of Alberta (UCP) MLA’s blasted their party leader and Premier Kenney for taking the province back into a severe COVID-19 lockdown.

Alberta premier crassly labels those at the Monday protest, which featured Modry and Hodkinson, as “unhinged conspiracy theorists”

At the Monday protest at the Alberta legislature in Edmonton, the crowd at one point called for Alberta’s Chief Medical Officer Dr. Deena Hinshaw to be put behind bars, chanting, “Lock her up! Lock her up!”

Sunday’s protest angered and enraged Premier Kenney, who took to Twitter to blast those with opposing views to COVID jabs and lockdowns as “unhinged conspiracy theorists.”

“Today protestors at the Legislature called for Dr. Hinshaw to be ‘locked up.’ They also chanted ‘just say no’ to vaccines,” tweeted Kenney. “Albertans respect the freedoms of speech and protest. But breaking the law, trespassing, threats and intimidation go too far. I condemn these actions and statements. It is increasingly clear that many involved in these protests are unhinged conspiracy theorists. Their words and actions are unacceptable.”

Former Canadian MP and leader of the People’s Party of Canada, Maxime Bernier, was also in attendance at the protest, where he spoke out against COVID lockdowns.

He blasted Kenney for implying that those with differing views are “unhinged conspiracy theorists.”

“‘Spreading misinformation and making threats is beyond the pale’, @jkenney, you’re describing what you, your police, your public health apparatchiks and those of all the other governments in Canada have been doing for over a year,” wrote Bernier on Twitter.