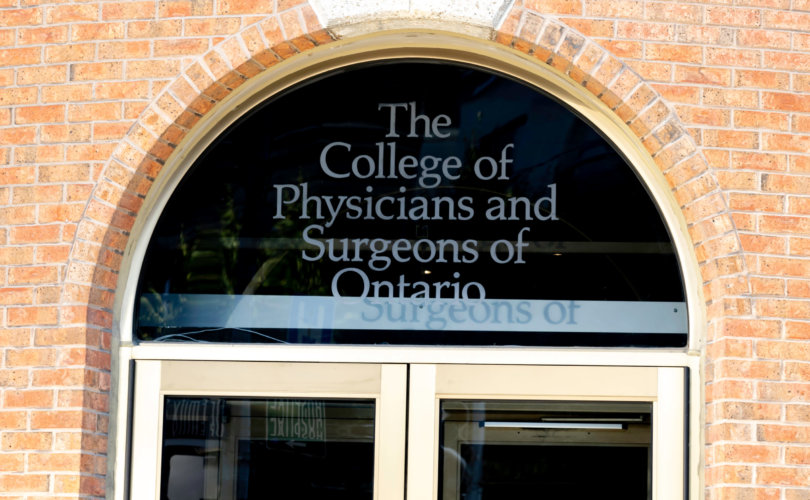 (LifeSiteNews) — A group of doctors under-fire for standing up to the COVID regime in Canada recently appeared with their lawyer on a podcast to share their story of resistance as they are now having their medical licenses threatened by the College of Physicians and Surgeons of Ontario (CPSO).

Drs. Mark Trozzi, Crystal Luchkiw and Patrick Phillips appeared alongside lawyer Michael Alexander and explained their ordeal of being investigated by the CPSO, which recently saw a landmark trial by the College where Alexander defended his clients and their right to advocate for patients, even if in ways not accepted by the mainstream COVID narrative.

LifeSiteNews reported on the trial, which took place on November 23, and Alexander described on the podcast what was he saw as the main lines of defense.

For Alexander, there were three fundamental issues at stake that he believed made the actions of the CPSO unlawful.

He said the first thing that was egregious in the case is the CPSO’s directive that “doctors may not say anything… contrary to public health orders and recommendations.” The second issue is the policy that “no doctor may write a medical exemption for COVID-19 injections except for in the most extraordinary circumstances.” “And the third,” he continued, “is [that] nobody may prescribe alternative, though approved, medications for the treatment of COVID-19 or its prevention.”

It is Alexander’s legal opinion that the CPSO had admitted its own defeat considering how they have defined the restrictions. “They admitted that the restrictions are just recommendations or guidelines,” he said.

Beyond the legal arguments, the doctors themselves explained their actions from the perspective of highly-trained medical professionals.

Luchkiw said she saw early on what she described as “cruel” treatment, especially of the elderly, due to COVID restrictions. In her professional opinion, this cruelty was not benefiting patients, but was actively contributing to declining health.

She also said that she was pressured into labeling someone as having died of COVID when they had died after a long and drawn out battle with cancer. These pressures, among others, eventually led to her opting to resign.

Phillips, on the other hand, is being investigated because he went public with adverse events he discovered that he said were denied by public health. He lost his position at the hospital where he worked, leading him to start his own family practice.

Both doctors faced investigations due to complaints about their medical practices. However, every complaint except for one against Phillips and Luchkiw did not come from patients, but instead other doctors who were upset with their approach. In one case a patient, who is a nurse, complained about Luchkiw, as the nurse believed that Luchkiw didn’t enforce COVID protocols strongly enough, also taking issue with some of her social media posts.

However, another investigation was launched against Luchkiw, which she said was done for the same reasons for which she was already exonerated. This insistence on investigating her medical professionalism led her describe the behavior of the College as “abusive” and “threatening.”

“It’s basically trying to just threaten the entire profession into compliance with whatever whim the College has… I just cannot participate in that,” she said.

She called the actions of the College “harmful to the patients of Ontario,” as the methods of the College stifle any helpful dissent from medical professionals, which is useful to scientific discourse.

— Article continues below Petition —
PETITION: Demand the Conservative Party apologize for not resisting Trudeau's COVID regime
Show Petition Text
4414 have signed the petition.
Let's get to 5000!
Thank you for signing this petition!
Add your signature:
Show Petition Text

Trozzi, who has been particularly outspoken, said that he has taken the stance he has because he believed it was his duty as a doctor to be cautious about the safety of Canadians. “I followed my Hippocratic Oath… I remained an intact, intelligent human being with a heart, and no matter how much money I could have made to kill off the citizens of Ontario, I wouldn’t do it.”

He said he learned from the research early on that a vastly higher number of people died “within a few months” of taking the experimental jab than is consistent with any other vaccine on the market.

He expressed a particular concern over the alarming rate of miscarriages that took place during the Pfizer trials. Trozzi said the COVID jab makes “thalidomide look like a Flintstone vitamin.”

Alexander explained that he took a unique legal approach, something that has not been done regarding CPSO matters before, and used a legal permission to challenge the jurisdiction of the CPSO before the clients themselves were even assessed. It is his legal opinion that what the doctors have done and said is protected by the Canadian Charter of Rights and Freedoms, and is thus protected by the highest law of the land. In his estimation, therefore, any CPSO regulation must be subject to that.

As of yet, there has been no ruling in the case of the doctors, and Alexander told LifeSiteNews it might take months before any such developments.