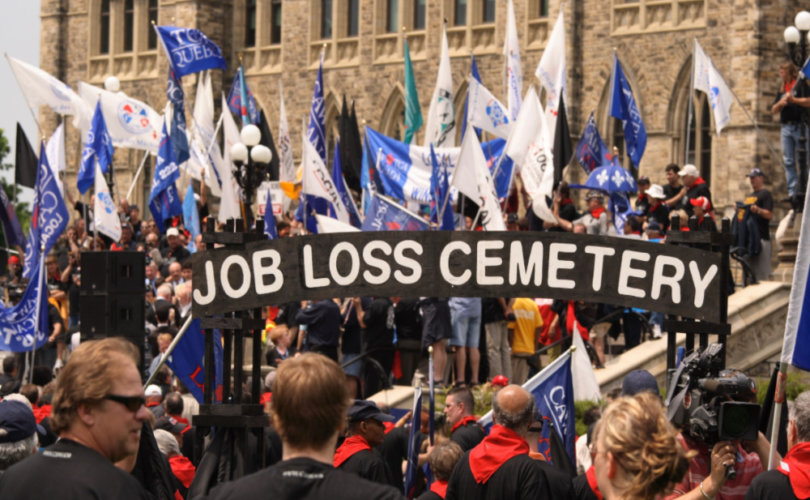 (LifeSiteNews) — Statistics Canada’s most recent data shows that the number of jobs in the nation dropped by over 30,000 in July, bringing the total number of jobs lost in the last two months to nearly 75,000.

To make matters worse, the 31,000 figure takes into account the 23,000 jobs that were added in July, meaning in raw numbers, roughly 53,000 jobs were lost in a one-month period.

The healthcare sector alone made up 22,000 of those 53,000 lost jobs, which is a sector that has become notorious in Canada for already having a destabilizing worker shortage.

Despite the “unexpected” decrease in jobs through June and July – economists had predicted a job increase — the unemployment rate reportedly remained the same at a low 4.9 percent.

Although people assume that the unemployment rate is calculated based on the number of Canadians of working age who are not employed, the statistic does not consider a person to be unemployed if they are not actively looking for a job.

In effect, while 4.9 percent of Canadians looking for jobs are unemployed, the number of working aged Canadians without a job is a higher figure.

While LifeSiteNews has produced multiple reports about the current global economic crisis, particularly on the topic of inflation, mainstream outlets in both America and Canada seem insistent on downplaying the severity of the economic climate.

However, critics of Prime Minister Justin Trudeau have consistently called out his government’s “reckless” deficit spending as a cause for the current inflation crisis in Canada, taking particular issue with the unprecedented actions taken during the so-called COVID pandemic.

In 2020 and 2021, Trudeau’s federal government nearly doubled the national debt, which in turn massively inflated the country’s money supply and contributed to the increase in the price of consumer goods.

While it is true that other countries, such as the United States and the United Kingdom, are also suffering from high inflation, the central banks in those countries likewise suppressed interest rates and racked up massive levels of debt.

At least one Conservative politician, Pierre Poilievre, has made reference to the Trudeau government’s spending and his finance minister’s ties to the World Economic Forum’s “Great Reset” agenda, suggesting the economic crisis may be an intentional part of the Great Reset’s goal of ensuring by the year 2030, “You’ll own nothing and you’ll be happy.”

It is not just inflation and a downward trend in jobs that has Canadians worried about the economic future, but rising interest rates as well.

While it is typically necessary for central banks to increase interest rates in order to tame inflation, a top real estate executive in Canada says that as interest rates rise and the housing market cools, institutional investors such as Blackstone — another WEF-linked entity —  are likely to start buying up more Canadian properties.

“The lower you can buy as an investor, the higher the chance of selling high. [These companies] are well capitalized, they are smart and they have the means to make an impact in the marketplace,” ReMax Canada president Christopher Alexander warned.

While institutional investors have been primarily focused on the American real estate market, Blackstone, and another firm called Core Development Group, have recently pledged billions of dollars to expand into the Canadian market – for the purpose of renting out the properties in perpetuity – effectively transferring the ownership of large swaths of real estate from individual Canadians to billion-dollar corporations.