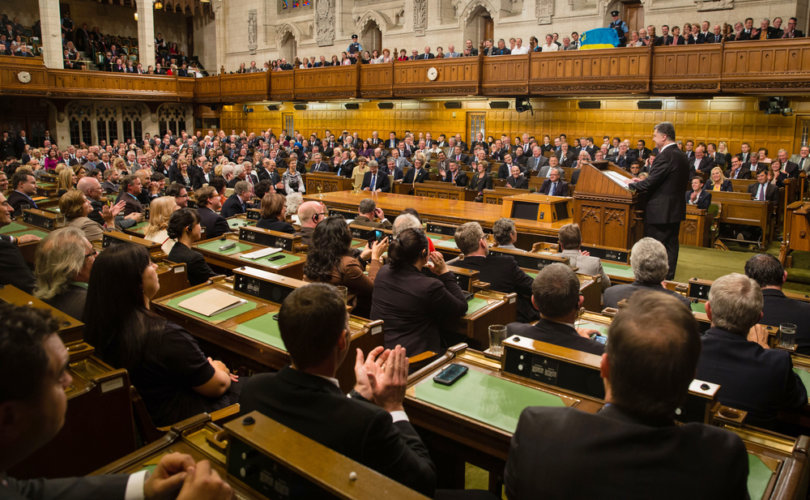 OTTAWA, May 31, 2016 (LifeSiteNews) — The Liberal government’s controversial Bill C-14 legalizing euthanasia and assisted suicide passed third reading Tuesday night by a vote of 186 to 137, and now heads to the Senate.

Meanwhile, a rally is planned for Wednesday noon on Parliament Hill to protest the coming euthanasia regime and the Liberal bill — which the Senate could amend but which Euthanasia Prevention Coalition executive director Alex Schadenberg has condemned in its present form as providing “legal cover for murder.”

The legislation is the Trudeau government’s response to the Supreme Court’s February 2015 Carter ruling striking down the current law as unconstitutional, which comes into effect June 6.

Bill C-14 had passed report stage Monday night by a vote of 192 to 129 — but not before MPs resoundingly defeated nine opposition amendments, six of which were put forward by rookie Alberta Conservative MPs Garnett Genuis and Michael Cooper.

Genuis submitted four amendments, among these: that individuals seeking assisted suicide or euthanasia be given information on full range of palliative care options; that the phrase “natural death” be changed to “imminent” death; and that requests for euthanasia or assisted suicide be verified by a competent legal authority.

Cooper proposed that individuals with an underlying mental illness or condition be required to have a psychiatric assessment to determine their capacity to consent.

He also put forward an amendment allowing healthcare providers and institutions the right to refuse to “provide direct or indirect medical assistance in dying.”

Opposition MPs used Tuesday’s third reading debate to slam the Liberals for refusing amendments to the bill, and using closure and time allocations to rush it through the House.

And they also repeatedly blasted the Liberals for not adding explicit conscience protection for health care workers and institutions to Bill C-14, and for dragging their feet on improving palliative care, including breaking a campaign promise to allocate $3 billion for that purpose.

“It’s extremely disappointing that so many reasonable amendments were presented by opposition and not one of them made it into the bill,” noted Manitoba MP James Bezan.

Bezan criticized the bill’s lack of conscience protection, noting that the World Medical Association has condemned euthanasia and assisted suicide as unethical, and stated he would work to improve palliative care.

“I do not believe we should institute physician-assisted suicide,” he said. “Expanding palliative care is by far the better option… As someone with very strong Christian values, I cannot support Bill C-14.”

“Time and time, this government has limited debate and tried to strong arm a flawed bill through,” said NDP Murray Rankin, whose amendment to broaden the bill’s scope had been defeated Monday.

The Victoria MP stated that the Alberta and Ontario courts recently ruled against the federal government’s approach, which restricts eligibility to euthanasia or assisted suicide to an individual who is suffering from an “incurable” disease, illness or disability, “in an irreversible state of decline” and whose “natural death is reasonably foreseeable.”

The Alberta court ruled a 58-year-old woman with a psychiatric condition was eligible for assisted suicide, and an Ontario court ruled that the Supreme Court’s decision did not limit eligibility to those whose death is reasonably foreseeable.

Rankin, co-chair of the joint parliamentary committee, submitted a last-ditch motion Tuesday to return Bill C-14 to the justice committee because the bill was “patently unconstitutional.” The motion was defeated by a vote of 267 to 54.

Manitoba Tory MP Ted Falk criticized the Liberal-dominated justice committee, of which he is co-chair, for not approving any “meaningful amendments” to Bill C-14, “despite the many concerns voiced again and again.”

Those were “missed opportunities” to improve what Falk described as a “significant social reengineering bill…because it changes how we view the sanctity of life.”

Falk, who stated he believed in the sanctity of life from conception to natural death, blasted the Trudeau government for its tepid commitment to improving palliative care.

“When there is proper palliative care available, the need for assisted suicide just about falls down to nil,” he said.

He noted that C-14 was amended to add palliative care review after five years, when the bill itself is reviewed. NDP MP Cheryl Hardcastle criticized five years as far too long.

Meanwhile, the justice committee did add a clause requiring the government initiate reviews no later than six months after the bill passes on the questions of extending euthanasia and assisted suicide to mature minors, solely for mental illness, and the use of advance directives.

BC MP Warawa, who observed that he’s had “more response on this than on any other issue in the last 12 years that I’ve been in Parliament,” pointed out that the bill amends the Criminal Code to allow, under certain circumstances, what is now homicide under the current law.

“We asked that all physicians, health care professionals, nurse practitioners, pharmacists, have the right to say no,” he said. “The government turned down that amendment.”

He also criticized the Liberals for engaging in partisanship by dominating the justice committee and invoking time allocations to close down debate, and warned the Senate would return the bill with amendments.

Any amendments passed in the Senate must go back to the House of Commons for a vote.

It is now generally agreed the bill will not pass the Senate by June 6, when the current law becomes void.

For record of the May 30 votes on amendments to Bill C-14, go here.